Upcoming 650cc cruiser from Royal Enfield has been spotted with USD forks, Tripper navigation, among other features. 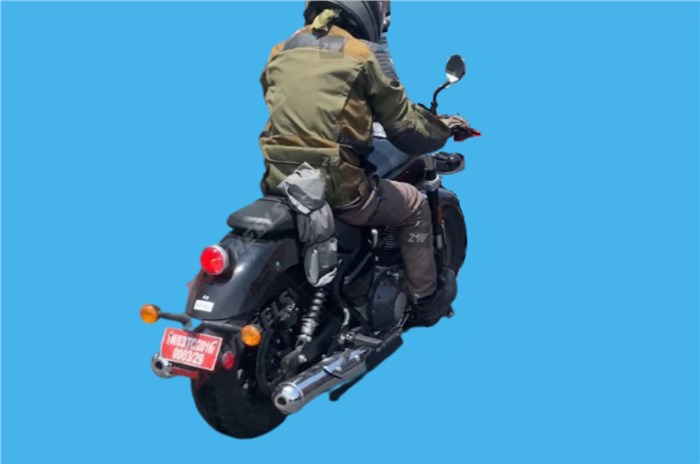 Taillight and rear fender is reminiscent of the Meteor 350.

Sightings of Royal Enfield’s 650cc cruiser test mules are nothing new at this point in time but the most recent one indicates that the bike is quite close to being production-ready.

The test mule spotted here bears more than a passing resemblance to the smaller cruiser in Royal Enfield’s line-up, the Meteor 350. The swooping rear fender, the round tail-lamp and even the instrument cluster with the Tripper navigation pod, all very closely resemble the Meteor.

The most glaring difference here is the presence of the 648cc parallel-twin from the Interceptor and Continental GT 650. Mated to a 6-speed gearbox with a slip-and-assist clutch, the air and oil-cooled engine makes 47hp at 7,250rpm and 52Nm of torque at 5,250rpm in the current models, and the cruiser should get similar, if not identical figures.

An important mechanical change on the cruiser is the presence of a USD front fork in comparison to a conventional telescopic fork at the front on the current 650 twins. It also rides on alloy wheels as opposed to the wire-spoke wheels found on the Interceptor and Continental GT. The cruiser’s switchgear too is borrowed from the Meteor. All these similarities reinforce the rumour that this upcoming bike could be called the Super Meteor 650.

The test mule spied here features a black finish on the case covers as well as the engine head, while the 650 twins get a brushed aluminium finish on these parts. Another unique feature is the presence of a heel-shifter, once again something that you get on the 350cc Meteor.

The cruiser looks to be nearly production-ready, with fully formed body panels, well-finished instrumentation and an overall complete look. It will quite possibly be unveiled by the end of this year. When it does finally make its way to showroom floors, expect a number of variants, colour options and accessories on offer, as is typical for recent bikes from Royal Enfield. This cruiser has also been spotted in a more affordable form elsewhere, with a conventional front fork and wire-spoke wheels. It will be interesting to see where things stand once the dust settles with RE’s 650cc line-up, once all the new models are introduced. Expect the cruiser models to sit slightly higher than the Interceptor 650, which is currently priced from Rs 2.88 lakh-Rs 3.14 lakh (ex-showroom, Delhi).

Would you pick this over the 650 twins in RE’s line-up when it is launched? Let us know in the comments section below.