At the inauguration of Bajaj’s new EV manufacturing facility, the brand’s MD spoke about the recent EV fire incidents in the country. 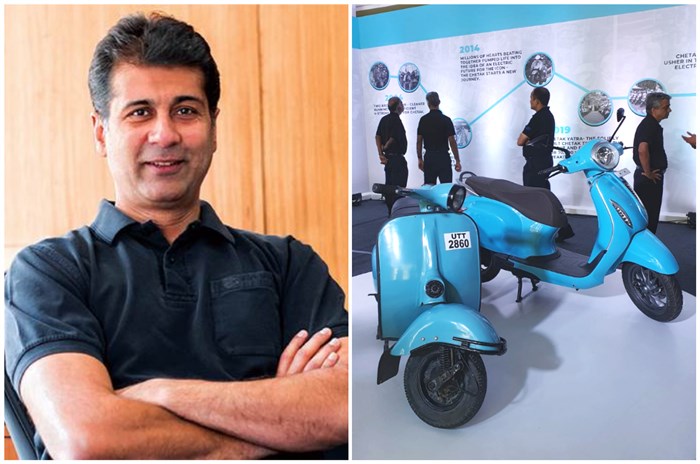 Bajaj Auto recently inaugurated its new manufacturing facility for electric vehicles (EVs) at Akurdi, Maharashtra, and the company has invested Rs 300 crore for phase 1 of this facility. This brand-new EV line, called Chetak Technology, is situated in what used to be the assembly shop for the original Bajaj Chetak scooter. And where Bajaj used to produce 128 Chetaks a day on six conveyors, the plant can now put out 800 units a day from a single line – in the first phase.

At the event, Rajiv Bajaj, managing director of Bajaj Auto, spoke about the present state of affairs in the EV industry and, more specifically, the disturbing pace of fire-led accidents. He said, “When a flower doesn't bloom, you fix the environment in which it grows, not the flower”.

'Due process not being followed by some start-ups'

“What concerns me more is the environment that has promoted this mad gold rush. Why is this happening in the EV world?” he said at the inauguration event. Quite clearly, it was a mystery why people who “have no business to be in the EV business” continue to do so even while it is more than evident that due processes are not being followed. From Bajaj’s point of view, this was an important point that needed to be understood and why relevant government authorities have diluted the norms.

For instance, under the guise of low-speed vehicles, “you can bring in any junk from anywhere” and put it out on the roads. “Where have we gone wrong? The people concerned have to reflect on this,” he added.

Companies like Bajaj Auto “have a certain way of doing things” quite unlike the present lot of new entrants. “We believe we have a robust process that we follow which ensures that what we produce is high quality, reliable and durable,” elaborated its MD.

'Some start-ups are not doing any R&D'

Terming these start-ups as upstarts, he said he knew of some of these people who have no R&D or engineering, no “real purchase function in the engineering sense” and nothing more than just a part assembly facility. They were also importing stuff that had not been really validated for the EV market.

“That is perhaps why you are seeing these incidents of mishaps, fires and accidents,” said Bajaj while driving home the point that there are only two types of EVs in the market: those that have caught fire and those that are going to.

He was candid enough to add that such incidents had occurred in the internal combustion (IC) engine space too where motorcycles had caught fire. “The issue is not the fire but the underlying process of the manufacturer by which he does what he is supposed to do. If he has a problem, he needs to resolve it,” explained Bajaj.

He was categorical that the likes of Bajaj Auto were not in this segment “opportunistically” because there was a “big carrot out in the marketplace” in the form of subsidies offered by the Centre and a slew of States. This was perhaps the reason why so many people were tempted to import some kits, assemble them and then sell these EVs.

“This is unfortunately the environment that exists. Has it necessarily coloured the industry? I don't think so because consumers are smarter than that,” affirmed Bajaj. After all, even in the IC engine world, there were some people who tried their luck in putting together scooters and motorcycles from kits brought in from different parts of the world.

None of them sustained and it did not cause any collateral damage to the rest of the industry. “I think consumers are wiser than that and they understand while making the choice for proven brands and products,” said Bajaj.