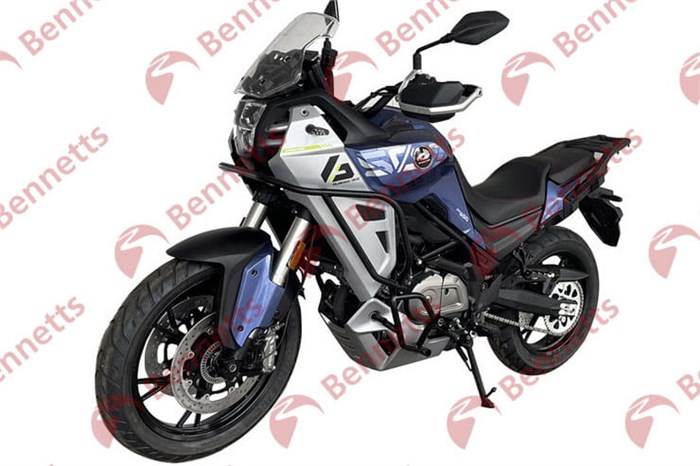 The upcoming 650cc ADV from QJMotor, seen here equipped with alloy wheels and without luggage. 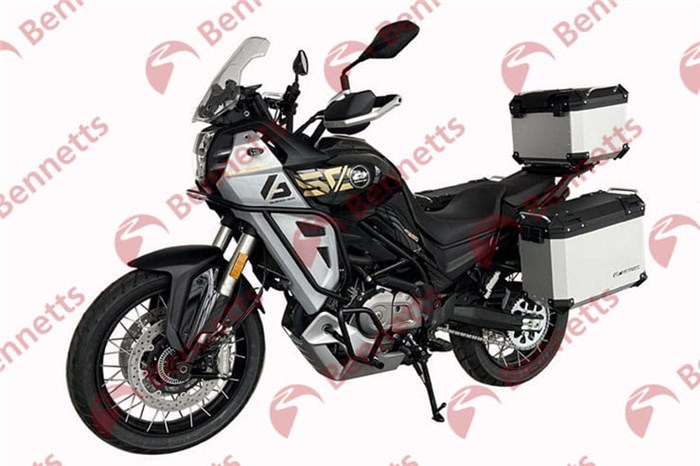 Here, it is seen rolling on wire-spoke wheels, with an aluminium top box and panniers.

Type-approval documents reveal yet another adventure bike by Chinese bikemaker QJMotor. This time around, it's a 650cc adventure tourer powered by a V-twin engine that seems poised to take on the Suzuki V-Strom 650.

The bike's square-ish design and flat-sided front end somewhat resemble the Honda CRF190L, which was recently patented in India. Its mirrors and hand guards, however, are the same as those seen on the Benelli TRK 502 – the latter even features TRK branding. With the degree of collaboration seen between QJ and Benelli (both are owned by the Qianjiang Group), it is possible that this bike will be rebranded and sold as a Benelli in other parts of the world (QJMotor currently sells its bikes only in China).

As per the documents, the QJ V-twin will displace 645cc, which is exactly the same as the V-Strom, but is rated at 76hp – 5hp more than the V-Strom. The bike gets 19 inch and 17 inch wheels at the front and rear, respectively, and can be had in either wire-spoke or alloy construction. The bike has also been homologated with and without luggage options, so a total of four versions will be offered. On the basis of the pictures, it is visible that the bike will get an upside-down fork and monoshock set-up, and Brembo brakes.

With the emergence of this 650cc ADV, QJMotor has added to its ever growing adventure motorcycle catalogue. The company has its own versions of the TRK 502 and TRK 800 as well as another upcoming 693cc ADV, which will be sold elsewhere as the Benelli TRK 702. The rebadged TRK 800, the upcoming 693cc motorcycle, and this 650cc ADV are all rated at roughly 75hp, making things even more baffling.

Few manufacturers can claim to be as active as QJ at the moment, as some of the brand's other projects include a 400cc sportbike, another 550cc sportbike and an upcoming electric motorcycle. So formidable is its manufacturing capabilities, that it is in partnership with MV Agusta, and will even manufacture Harley-Davidson's upcoming 350 and 500cc models for the Asian market.