The yet-to-be-named motorcycle uses an enlarged version of the 500cc parallel-twin seen in the Benelli TRK 502, Leoncino and 502C models. 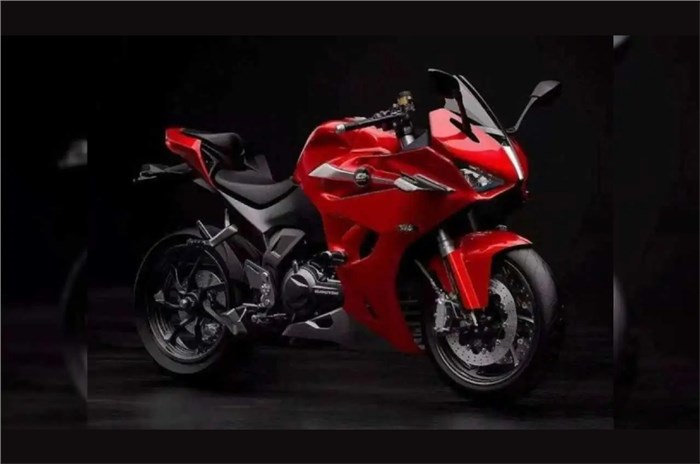 Benelli’s parent company, QJ Motor, has released a picture of its upcoming 550cc sportsbike, designed to rival the likes of the Honda CBR500R. Like its Japanese competitor, the QJ motorcycle (whose name is yet to be revealed) uses a parallel-twin engine – one that’s derived from Benelli’s 500cc models.

The twin-cylinder motor that powers the 502C, Leoncino and TRK 502 has been enlarged to 554cc, and, as a result, output figures have also gone up slightly. In the half-litre models, the engine produces 47.5hp and 46Nm, which makes it A2-compliant. In this larger 554cc guise, peak output figures are 57hp and 54Nm, though it’s quite likely that a restricted A2-compliant version will also be made available with slightly lower figures. In its restricted form, the QJ’s numbers should be almost on par with the CBR’s, but it will have a nose ahead in its unrestricted form.

The relatively modest output figures haven’t stopped QJ’s designers from going to town on the motorcycle, though. Highlights include fairing-mounted winglets and a single-sided swingarm, and while it all does look rather striking, there’s no getting around the uncanny resemblance to the Ducati Panigale V4. The fascia, tail section, fairings and aforementioned winglets and swingarm all closely mimic Ducati’s flagship superbike, and the red paint only strengthens the connection.

One area that's nothing like the Panigale, though, is ergonomics. With tall clip-on handlebars and a seemingly relaxed seat-to-peg distance, the riding position on the new QJ is likely to be more sport tourer than full-blown supersport, which puts it in line with the bike’s expected performance levels. As with many Benelli models, the underpinnings are beefy, with a meaty-looking upside-down fork and twin brake discs up front. The rear brake disc looks rather large as well, and stopping hardware will come from Brembo, while KYB is responsible for the fork.

There is a possibility that this motorcycle could spawn a rebadged Benelli counterpart, and if that happens, we could see this motorcycle in Indian showrooms at some point in the future. If Benelli’s existing 500cc line-up is anything to go by, expect this sportsbike to carry a small premium and cost around the Rs 6 lakh mark once it arrives. This would place it in a neat spot between the likes of the KTM RC 390 and the Kawasaki Ninja 650.