Kawasaki ZX-25R in the works

The upcoming in-line four motorcycle is rumoured to produce nearly 50hp of power. 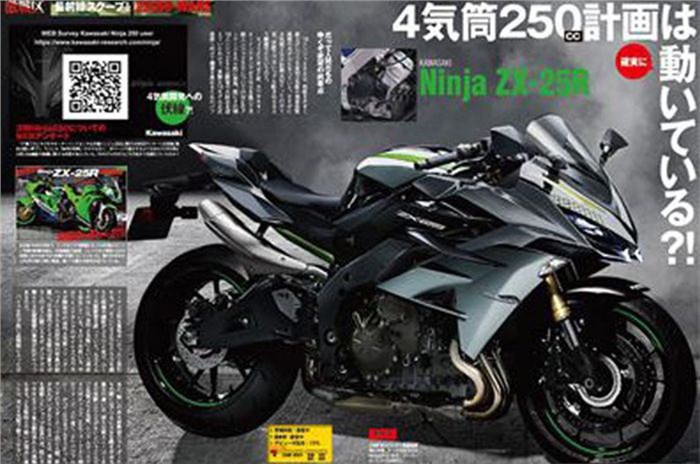 Reports suggest that Kawasaki is working on a 250cc, in-line four-cylinder motorcycle and that a prototype is already undergoing tests at the Kawasaki factory in Indonesia. A poster also reveals that the motorcycle will be called the Ninja ZX-25R – but we’re unsure of the authenticity of the image so this remains uncertain.

Kawasaki previously sold a similar specced motorcycle called the ZX250R between 1989 and 1997. The transverse four-cylinder engine on the ZX250R made 45hp and 24.5Nm of torque and was capable of revving up to a mind-boggling 19,000rpm. If this new rumoured in-line four-cylinder engine does see the light of day – and if it is capable of similar performance – it will be one of the most powerful 250cc engines currently on sale. The poster image also contains the image of a motorcycle that features bodywork styling inspired by the Ninja H2, while the front end is reminiscent of the Ninja 1000. To reiterate: we’re unsure about the credibility of this image so we can’t say for sure what the bike will look like.

This isn’t the first time rumours about a new in-line-four quarter-litre Kawasaki have made rounds on the internet; and if the Ninja ZX-25R does come into existence in the near future, it will take on the likes of the KTM RC390, Yamaha YZF R3 and Ninja 400 in the Indian market.