The concept showcases the design direction of the new-generation Xtreme. 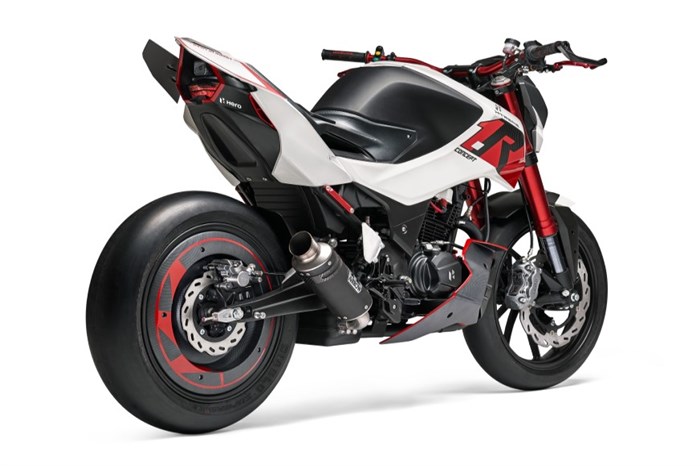 Hero MotoCorp showcased the Xtreme 1.R Concept at the EICMA 2019, as a precursor to the next-generation Xtreme. The new Hero Xtreme is said to be aimed squarely at the youth and that's obvious from the sharp and aggressive lines on this concept motorcycle. Going by Hero’s conservative design, especially with motorcycles such as the Xtreme 200R, this new design direction is far more youthful and futuristic in its appeal.

Hero says that the Xtreme 1.R Concept tips the scales at 140kg (kerb) and is inspired by the precision of an arrow and that explains the sharp styling lending the motorcycle an aggressive and committed stance. The LED headlamp looks mean while the tank is beefy. The small tail section rises high, akin to a sportbike, and has an LED lamp underneath the cowl with a small GoPro camera integrated neatly. The floating rider’s seat is a neat touch too, but let’s not forget that this is a concept motorcycle and the production-spec Xtreme may not be as aggressive in design or ergonomics. Nevertheless, the concept does look promising.

Hero seems to have used the existing chassis and wheels of the Xtreme 200 R under the bodywork, but there’s no word if this frame will make it to the new Xtreme. While the official press release states that the Xtreme 1.R Concept predicts a motorcycle that boasts sharp handling, be it in the streets or around corners, we can’t say for certain if the new Xtreme will use the light and agile chassis of the existing 200 R or get a completely new frame. Also, the beefy front fork, radially mounted front brake calipers and slick tyres won’t be part of the standard equipment on the new Xtreme. These are liberties that manufacturers usually take with concept motorcycles and, as we know, not every component makes it down to the final production form.

The air-cooled motor you see is pretty basic, although you do see an oil-cooler tucked behind the belly pan. Hero hasn’t revealed any details about the engine that will power the new Xtreme. But we suspect Hero would employ a new high-performance motor that’ll either be oil-cooled or liquid-cooled, as in the case of the Pulsar 200 NS.

So far, that’s all we know about Hero’s Xtreme 1.R Concept motorcycle and we expect the company to show us a near-production spec or the actual motorcycle by the end of 2020.