The off-road capable motorcycle is available in two variants and will come to India in 2019.

Triumph has taken the wraps off the new Scrambler 1200 and promises that this will be the most off-road capable bike of its kind in the category. The Scrambler 1200 is powered by a differently tuned version of the 1200cc, liquid-cooled, parallel twin engine seen in the Thruxton. This is by no means a budget motorcycle and there’s a host of top shelf parts used in the suspension and braking department as well as a comprehensive electronics package.

Two versions will be available, a base XC, which promises to be a capable off-roader in its own right and an even more off-road focused XE. Interestingly, the company is sticking with this off-road focus that is inspired by the original scramblers from the 60s (remember the iconic TR6 that Steve McQueen rode into the history books?), and to that extent, there’s no road-biased XR version, like you normally see with the Tiger range. 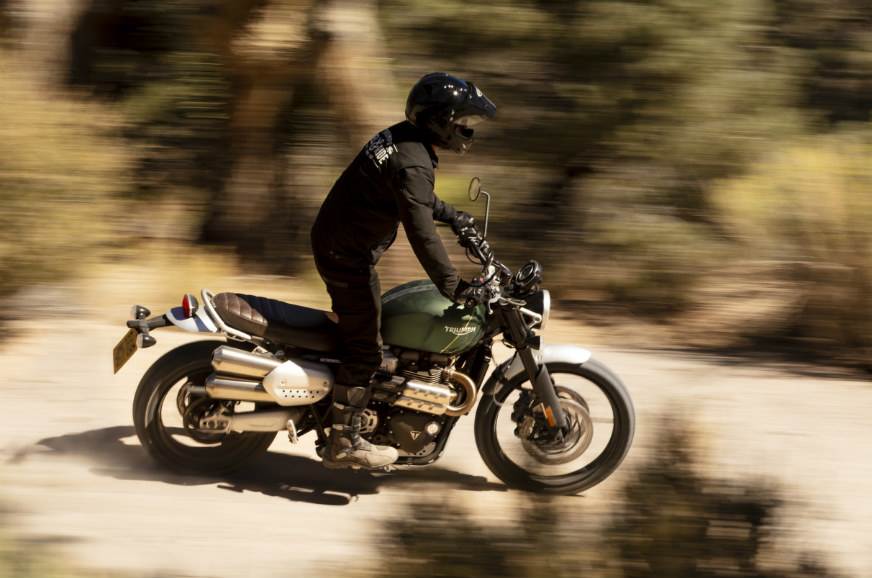 Triumph says the new double cradle chassis has been built specifically for the purpose and it calls this the first in class ‘Dual Purpose Classic/Adventure Cross-Over’. That’s a mouthful, but Triumph is essentially telling you that this motorcycle takes its off-road intent seriously. For starters, it's the first motorcycle in the class to feature a standard 21-inch wheel and we’re pleased to see that this is a wire-spoke rim which supports tubeless tyres. The rear is a 17-inch unit and the wheels are wrapped in semi-blocky Metzeler Tourance tyres. For those who want even more ability, Pirelli Scorpion Rally tyres are approved for use as well. 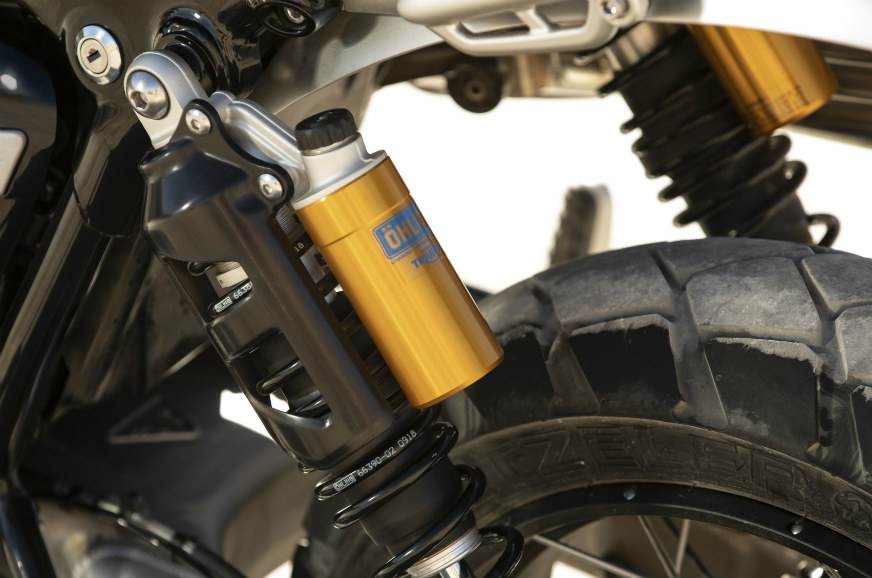 Suspension is high tech as well and you get a 45mm fully adjustable Showa USD fork as well as a set of fully adjustable Ohlins dual shocks at the back. The XE model takes this a step further with a fatter 47mm Showa fork up front and the same brand of suspension at the rear. The XC offers a considerable 200mm of suspension travel, but the XE raises this to an impressive 250mm of travel at both ends, which is higher than most ADV bikes. Braking comes in the form of dual front discs bitten down by premium Brembo M50 calliper. Further supporting its off-road aspirations, XE also gets a 32mm longer swingarm and has a lazier 26.9 degree steering rake angle vs 25.8 degree angle on the XC - both these aim to boost stability. As a result, trail and wheelbase figures are different too. The XE also offers adjustable foot pegs as well. 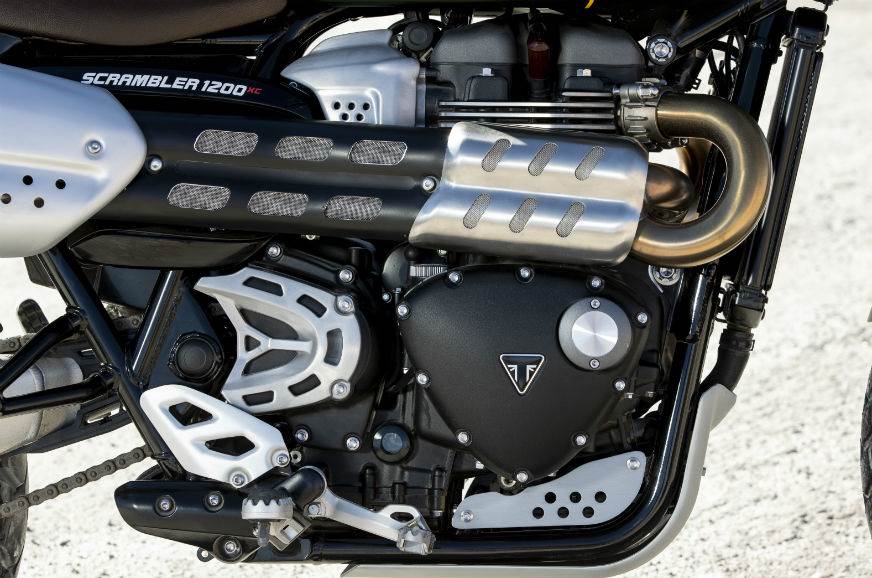 The Scrambler 1200’s motor is a HP (high power) parallel-twin borrowed from the Thruxton, but in a different state of tune. With 90hp at 7,400rpm and 110Nm at 3,950rpm, the Scrambler makes a little less power and torque than the Thruxton (97hp and 112Nm). Triumph says the engine has been tuned for a strong low and mid range and while the internal gearing on the six-speed gearbox is the same, the final drive ratio has been tweaked. The slip and assist clutch should result in easy control, which is in line with Triumph’s claim that this bike will be easy to ride in urban conditions.

What won't be easy for some is the sheer size of the bike. The Scrambler 1200 is a very tall motorcycle and the base model has a seat height of 840mm while the seat height on the XE is 870mm. These seats are not height-adjustable. Dry weights are 205 and 207kg respectively, which is in the same ballpark as a Tiger 800, if a tiny bit heavier. 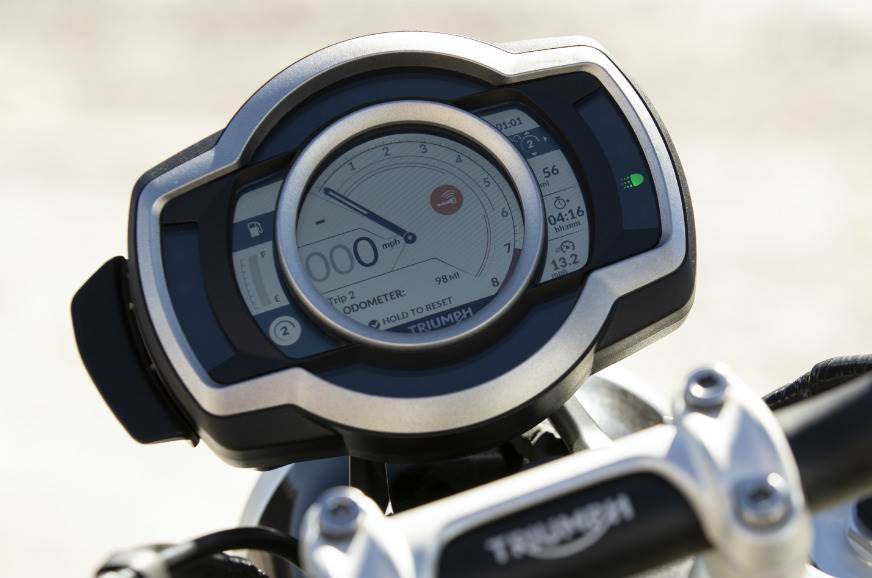 The electronics package on the Scrambler 1200 is quite extensive. For starters, there’s a new 2nd generation TFT display which packs a couple of unique features. First is what Triumph claims is the world’s first motorcycle-integrated GoPro control system. Co-developed with GoPro, this is a cool feature that allows you to control some functions of your GoPro action camera via the motorcycle’s display and switchgear. Being able to start and stop your camera rolling while on the go is a feature many will appreciate. The second addition comes in the form of turn-by-turn navigation that is powered by Google Maps, and the display also allows for Bluetooth phone and music functionality. All these features are enabled by an accessory Bluetooth module that you need to buy separately. 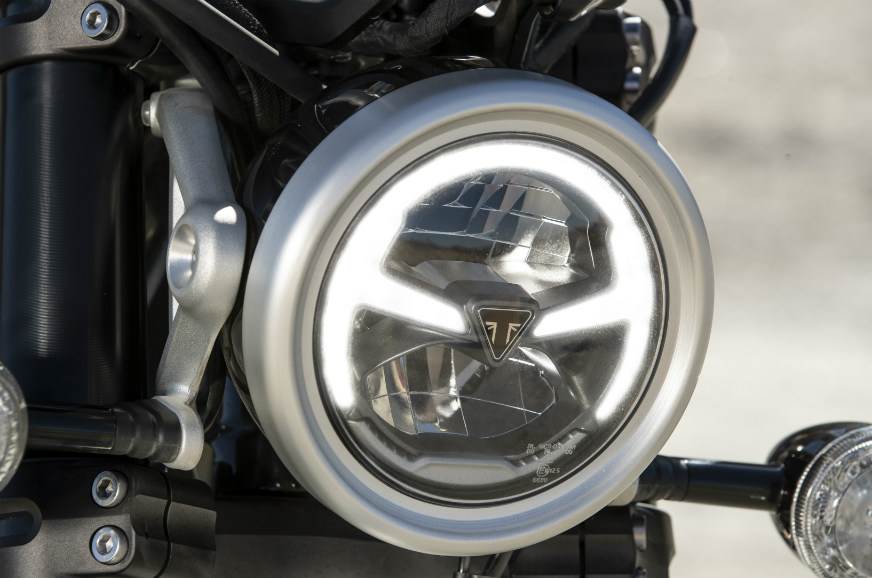 Triumph will bring the Scrambler 1200 to India in the first half of 2019, however, it will just be the XC for now and the company will consider the XE at a later date. The Scrambler 1200 makes for an interesting alternative to an ADV bike in that it is likely to be just as capable off-road, if not more, while probably being more easy to manage in most conditions. The ADV bike meanwhile, will still be the more comfortable option for covering long distances with large amounts of luggage. 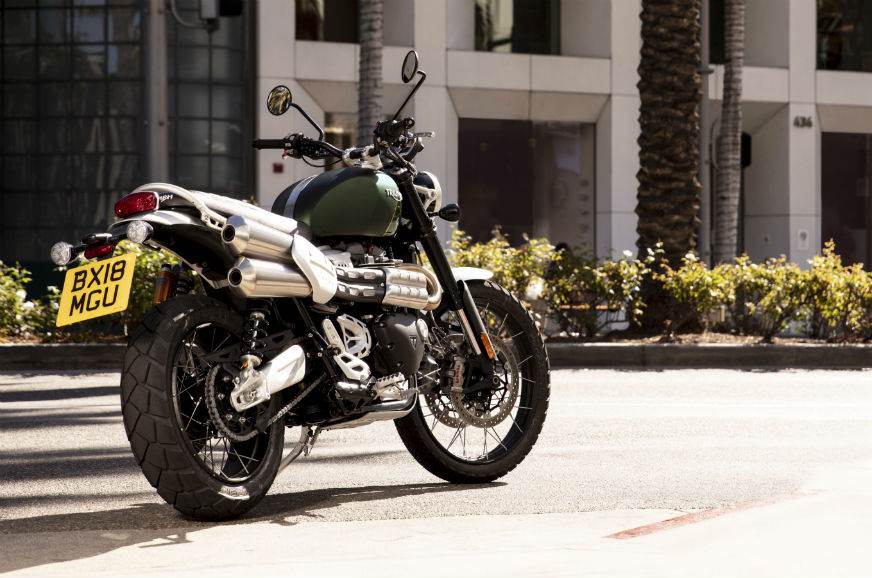 Triumph will release pricing and availability details in the second week of December, but going by what’s on offer, this is likely to sit at the top of the modern classic range. At this price zone, it will rub shoulders with Ducati's road-biased Scrambler 1100 range as well as the entry level Tiger 800 models.