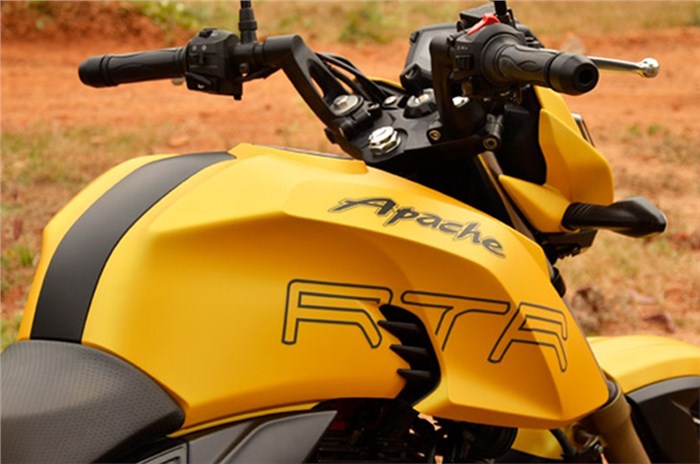 TVS is expected to launch the thoroughly updated 2018 Apache RTR 160 on March 14. As the spy images suggest, the new RTR 160 will feature styling that is more in line with the TVS Apache RTR 200 4V. The bike will also get a considerable amount of mechanical changes.

The RTR 160 has received consecutive cosmetic updates since its launch over a decade ago, but the bike has never been thoroughly updated. This new version, which will launch in less than a week’s time, is expected to change that. With an overall styling heavily inspired from the RTR 200, it features a similar tank, headlight, tail-light, instrumentation and even turn indicators. The RTR 160 will also feature a similar ‘shotgun’ exhaust design as on the RTR 200.

However, the RTR 160 does feature a different centre panel and a single-piece seat, unlike the split unit seen on the RTR 200. The bike was also spotted riding on differently designed alloy wheels.

The RTR 160 will also use a new frame that will be paired to a mono-shock for the first time, replacing the outgoing twin shock absorbers. The images also reveal that the new bike's air-cooled engine also gets oil cooling for better heat management. We expect the new engine to be significantly more refined than the previous 159.7cc unit, with a bump in power and torque also expected over the outgoing 15.1hp and 13Nm.

Unlike the Apache RTR 200, which has a slightly sporty riding position owing to the clip-on handlebars, the upcoming RTR 160 will feature a conventional handlebar for a more comfortable riding position. The bike spotted testing was also equipped with a disc brake at the front and a drum brake at the rear. However, like the current-gen model, we expect TVS to offer a rear disc brake as an option.

We expect this upcoming 2018 RTR 160 to be priced slightly higher than the outgoing models that currently retail for Rs 78,215 (front disc and rear drum) and Rs 80,544 (front and rear disc) (both prices, ex-showroom, Delhi). In terms of rivals, the motorcycle is a direct competitor to the soon-to-be-launched Honda X-Blade, the Yamaha SZ-RR and the Hero Xtreme Sports.