TVS has thoroughly updated the RTR 160, but how does it compare against Honda’s new X-Blade 160 and Bajaj’s NS160? 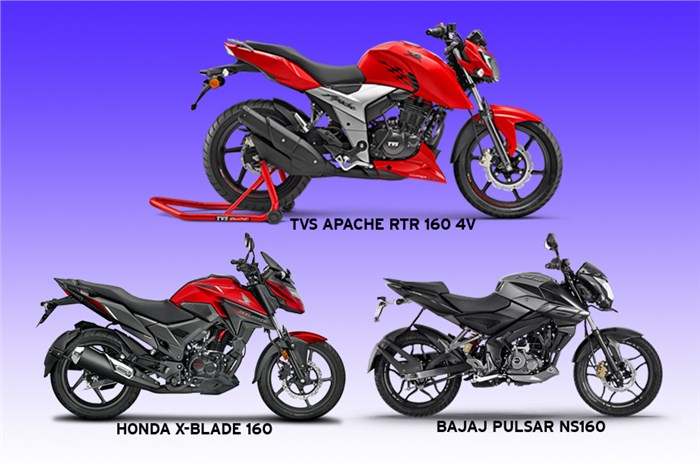 The TVS Apache RTR 160 4V has just debuted with a number of impressive specifications. The Apache RTR 160 used to exist at the lower section of the 160 segment, but this update has made it a more premium machine. In this spec comparison, we’re going to compare the TVS with the two other latest entrants in the 160cc segment – the Honda X-Blade 160 and the Bajaj Pulsar NS 160. Here is how the three compare on paper.

Design and style
The RTR 160’s overall styling is heavily inspired from the RTR 200; it features a similar tank, headlight, tail-light, instrumentation and even turn-indicators. The RTR 160 also features a similar ‘shotgun’ exhaust design. On the other hand, Honda has positioned the X-Blade to attract youngsters and millennials, and for this purpose, it has adopted a very aggressive design language. The basic silhouette is reminiscent of the Honda CB Hornet 160R, but the company’s designers have given it sharper panels to increase its visual appeal. Like the X-Blade, the Bajaj Pulsar NS160 also shares the style of its bigger brother, the NS200, and that means handsome lines, an underslung exhaust and split grab rails. Honda’s X-blade however, is the only bike in its segment to feature an all-LED headlight.

Engines and performance
TVS didn’t shy awake from making it evident that its newest bike, the Apache RTR 160 4V has segment-leading power figures. The 159.7cc oil-cooled motor makes an impressive 16.8hp on the fuel-injected model (16.5hp on the carburettor model) and 14.8Nm of torque (on both models). This gives it a power to weight ratio of 115.38hp/tonne on the carburetted rear drum variant and 114.28hp/tonne on the heavier, fuel injected/ rear disc variant. This is where Honda’s new X-Blade 160 loses out the most; the Honda’s 162.7cc motor only produces 13.9hp and 13.9Nm of torque, resulting in the lowest power to weight ratio (99.28hp/tonne) of the three. The 15.5hp/14.6Nm NS160 fares quite well in this comparison; it manages to come in closely behind the RTR 160 4V with a power to weight ratio of 109.15hp/tonne. Of the three, the Honda gets only two valves per cylinder, while both the TVS and Bajaj feature four valves per cylinder.

Chassis and brakes
This is where all three motorcycles are quite similar; all three feature a conventional front fork and a monoshock at the rear. Handling braking duties on all three bikes is a disc up front and a drum at the rear, however, the RTR 160 can be optioned with a rear disc. All three motorcycles miss out on ABS. The similarities don’t end there; all three bikes have an identical fuel tank capacity of 12 litres. They are also very close in terms of weight; the X-Blade is the lightest at 140kg, followed by the NS160 at 142kg. The Apache RTR 160 is the heaviest at 143kg/145kg/147kg decided by the variant of choice. The Apache has the highest ground clearance of 180mm, which is closely followed by the NS160 at 176mm. The X-Blade sits considerably lower at 160mm. In an unusual twist, if you opt for an RTR 160 with a rear drum brake, you’ll get a slimmer 110/80-17 section tyre, whereas rear disc models come equipped with a 130/70-17 rear tyre.

Pricing
All three motorcycles are priced closely, within a few thousands of each other. The most affordable one here is the Honda X-Blade 160 at Rs 78,500. The Apache RTR 160 4V will set you back Rs 81,490 (carb with front disc) or Rs 84,490 (carb with front and rear disc) or Rs 89,990 (fuel-injected with front and rear disc). The Bajaj Pulsar NS160 is priced very closely to the base variant of the Apache at Rs 81,626 (all prices ex-showroom Delhi). Which one of these bikes presents the best deal? Let us know what you think in the comments below.