We participate in Royal Enfield’s new ride format, and boy, is it a hoot! 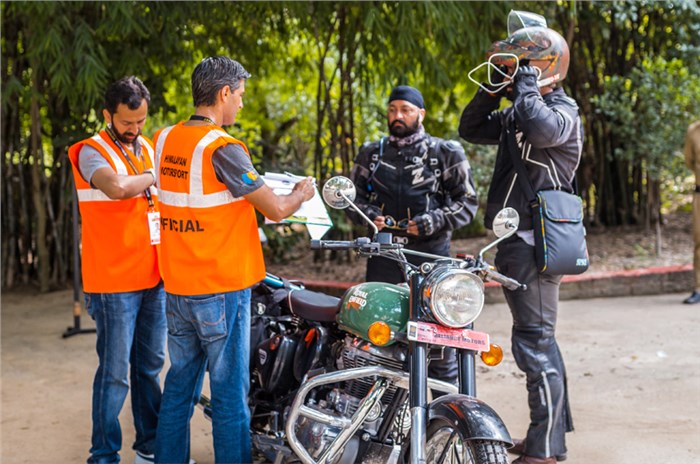 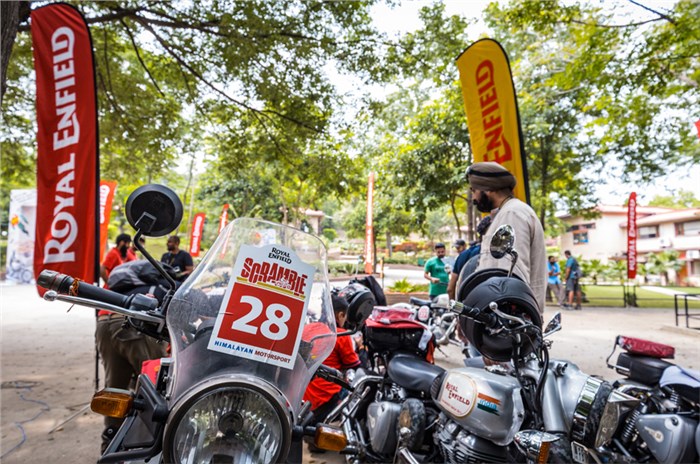 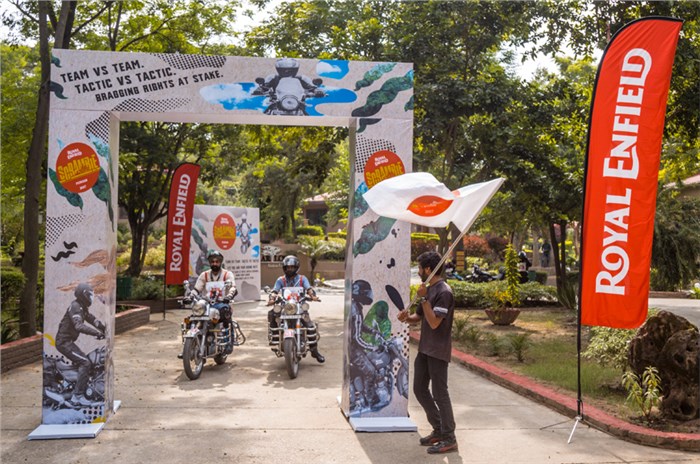 Participating teams were flagged off one by one. 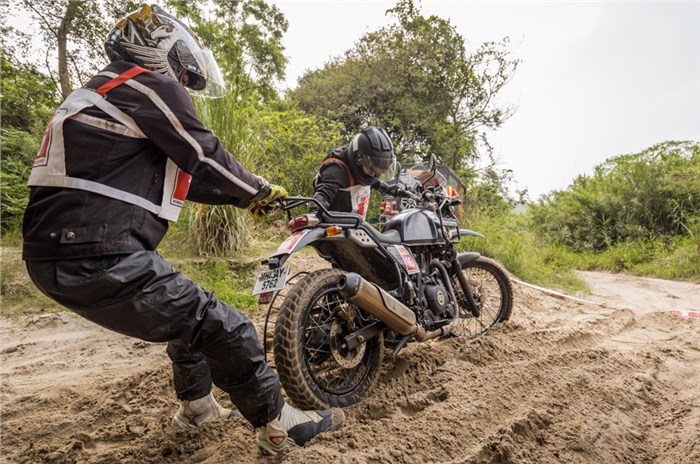 That’s me helping Janak out of a particularly deep bit of sand patch.

I’m hurtling through the air before I land in the paddy field, summersault on impact and come to a rest face-first in the muck. My first thought is, “I’m gonna be late at the next TC [time control].”

I’m in Punjab, crisp morning air in my lungs, lots of gooey muck all over my riding gear. A few feet away, the Himalayan’s engine keeps running. I run to flip the kill switch. With the bike stuck in some weeds on the field’s embankment, I’m in what one would call a bit of a pickle. After lots of shouting, my partner, Janak, turns back and makes his way through the slush to me; he is not happy. We enlist the help of a local who happened to be passing by, drag the bike out of the weeds and straighten it up. Zero damage. Good.

I hop on, thumb the starter button, slot the gearbox into first and am off again. Welcome to the Royal Enfield Scramble, Punjab 2017.

A week or so back, I get a message from Sherman Nazareth, my colleague at Autocar India: “Dude, you want to go for RE Scramble? It’ll be a great experience for you.”

“Hell yeah!” was my enthusiastic text back.

Royal Enfield Scramble, I wrote back in May 2017, is “a new non-extreme ride format. Targeted at adventure riding enthusiasts, it will blend exploration and adventure riding with competition and community riding.” I expected some easy riding with a bunch of Enfield boys, perhaps some light off-roading to justify the generous use of the word ‘adventure’. What I got was a big team from Himalayan Motorsport Association (HMA) of the Raid de Himalaya fame, a legit, certified Time-Speed-Distance (TSD) rally, some back-breaking off-roading and a whole lot of life and riding lessons.

A TSD rally involves a rally route split up into several sections, each with a designated average speed. Competitors are given a road book with diagrammatically represented directions and navigation guidelines, and they have to make it through the rally route in the most accurate time possible – not slower and definitely not faster. Unmarked time controls (TCs) are set-up along the route to ensure that you don’t get to make-up for lost time or shed extra time. Since Scramble is targeted at riders with little or no rallying experience, HMA encouraged the use of a phone app – RallyGDP – that allows you to input waypoints from your road book and data from your speed chart to provide you with map-based navigation and live time calculations.

Scramble competitors participate in teams of two. I was paired up with Janak Sorap, fellow journalist from Motoring World, and Royal Enfield was kind enough to supply us with two Himalayans – a black one for Janak and a white one for me.

Scramble was a three-day rally, and each day – ‘leg’ in rally talk – was further sub-divided into a TSD rally stage and one or more ‘tests’. These tests were technical off-road challenges that allowed competitors to nick some extra points (or in my case, annihilate my hard-earned TSD points).

Leg One started with a test where each team has to flip a tractor tyre over a couple of metres to get warmed up – this is no mean feat when you are all geared up – and then take three hot laps of an obstacle course replete with a ditch, a jump and lots of slush. My first lap was hardly ‘hot’ – I was still getting a hang of things – but the second one had me flying a good 10ft above the ground on the jump. I must applaud the Himalayan here – no suspension bottoming out.

The second stage of Leg One was yet another test – sand, 5km of it. This bit is a bit embarrassing, because I didn’t finish. Acute dehydration and a sun stroke had me flat on the ground in about 2km running through a reel of life’s regrets in my mind. I had to be taken out in a car by the marshals.

Following that was my first taste of a TSD rally. The third stage was a small-ish 35km TSD rally. Armed with the app, I thought this would be cakewalk, like using Google Maps to get to that new bar in town. It wasn’t. Maintaining the average speed over myriad terrain turned out to be quite the challenge, compounded by the constant fear of TCs flagging us down.

We came in last that day.

Leg Two started with a TSD rally, a much longer 160km stretch. We rode through a dry riverbed, past little villages, through fields, down brick roads, along highways and on a seemingly endless stretch of dirt road that became the scene of my aforementioned hurtling-through-the-air stunt. The Himalayan proved adept at handling the myriad terrain passing underneath it: standing on the pegs felt most natural, with the tank shaped perfectly for grabbing by the knees. Having learnt some lessons from the previous day, we strove to maintain our time, ending the day with a respectable mid-chart position.

Leg Three was the real deal though. Assuming that competitors by now have a fairly decent idea of how a TSD rally and the app work, HMA intensified the final rally stage in terms of navigation as well as terrain. We gunned through brush, riverbeds, sand, a stone quarry and what not, in an attempt to redeem our disappointing performance of the first two days. The Himalayan, laudably once more, took a severe beating as we tackled all the terrain with a full throttle, but emerged unscathed nevertheless. Three days of riding in dirt had empowered us with a lot more confidence, and we tackled corners fearlessly, with the rear constantly sliding in and out amidst clouds of dust. We topped the chart for Leg Three.

We, unfortunately, didn’t climb the podium that evening at the prize distribution ceremony, finishing fifth overall. The top honours went to a very affable and skilled team – Amit Bindra and Vikas Chawla from Delhi – but we nevertheless sat in the audience beaming all throughout. I’ve come out of Scramble a far better rider, and I think I’ve been bitten by the motorsport bug. Scramble is a brilliant ride format, doable for novice rally riders but challenging nevertheless. It will take your motorcycling skills to a new level and imbibe you with a strong sense of teamwork and camaraderie. For all you folks out there who love adventure and motorcycling (and own a Royal Enfield motorcycle), give Scramble a try. The next one is in December 2017, in Rajasthan. Just do yourself a favour and take along a camel pack.

Praise for the Himalayan: The Himalayan really did shine bright in Scramble, Punjab 2017; over three days of experiencing some serious action together, I’ve developed a bond with it. I haven’t detailed all the ruthless conditions and numerous falls that I subjected it to, but believe me, it walked away from it all without so much as a scratch. The front brake is wonderfully progressive, the rear astonishingly powerful. The 410cc engine is very tractable at low revs – a must in off-road conditions, while the bike’s ergonomics are great for some standing-and-riding action. The rear is a bit light, constantly sliding all over the place, but accustom yourself to that and you’ll be riding over pretty much all surfaces quite happily.