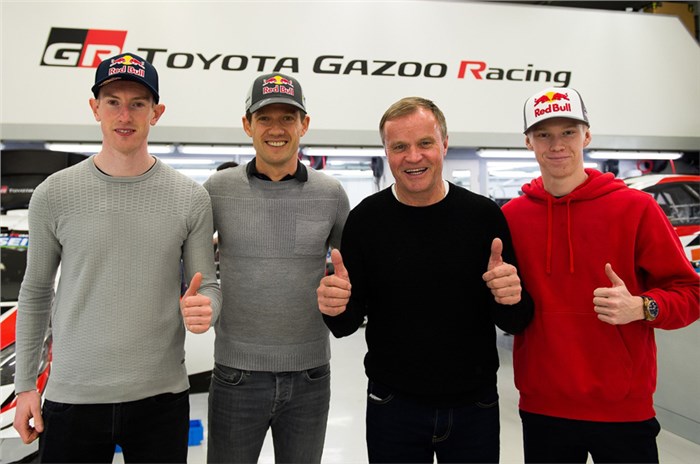 From Left to Right: Evans, Ogier, Mäkinen and Rovanperä

After several weeks of speculation, Toyota Gazoo Racing has confirmed that Sebastien Ogier will be racing for the team for the 2020 World Rally Championship (WRC). The announcement comes fresh on the heels of the six-time World Rally Champion confirming that he had decided to leave Citroen after racing for the team for a year – a move that Citroen has since cited as a catalyst to its own decision to quit the WRC with immediate effect.

Ogier will be driving for Toyota as part of a one-year deal and it is largely understood that this will be his final campaign before he retires from the WRC. The French driver also confirmed that he was in talks with Toyota as early as in 2016, when the manufacturer returned to the championship after a 17-year absence.

“I’m definitely very excited to be joining this team. It’s another new challenge for me and I’m looking forward to it. We already discussed it at the end of 2016, and although we didn’t manage to make it happen at that time, I’m now overwhelmed to start working with such an iconic brand as Toyota as well as my childhood idol Tommi Mäkinen (Team Principal, Toyota Gazoo Racing World Rally Team). The plan is to aim for some success together and to try to win back the world championship,” Ogier said.

Ogier isn’t the only new signing at Toyota; in fact, the manufacturer will be fielding an all-new line-up next year. The other two drivers confirmed to be driving for the team are Elfyn Evans, who will switch to the team after driving for M-Sport for his entire WRC career, and rookie Kalle Rovanperä, who won the WRC 2 Pro title this season. Both drivers have signed two-year contracts with the team. The new line-up replaces 2019 champion Ott Tänak, who has signed with Hyundai, along with Jari-Matti Latvala and Kris Meeke.

Commenting on Toyota’s new WRC driver line-up, Team Principal Tommi Mäkinen believes the team has the right balance of experience and raw potential. “I’m really pleased with the driver line-up we have been able to put together for next season. I believe it provides us with a great balance in our team as we target more championship trophies next year and in the future. We know how strong Sébastien is and we’re all looking forward to working with him and Julien. I think that being able to attract a driver with his record says a lot about what we have achieved in such a short space of time with this team. Elfyn is a driver I have been watching for some time. We’ve seen that he can have the speed to win on almost any surface, but he can also be very clever when needed and score good points. I’ve known Kalle since he was very young and it’s always been clear that he has something special,” he said.