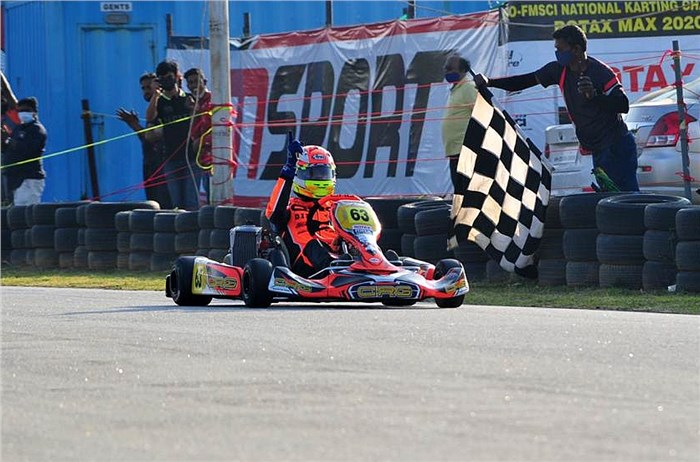 Narain Karthikeyan’s NK Racing Academy secured both, the teams’ title as well as the drivers’ title with Arjun Maini in the Senior Max category of the 2020 Meco FMSCI NKC Rotax Max Championship. The team has dominated the field in what is its karting debut; just earlier this year, it had signed a deal with CRG to become the Italian karting giant’s official factory team in the Indian subcontinent.

Arjun has previously raced in F2 and at the 24 Hours of Le Mans, and was recently confirmed as one of the drivers to join Racing Team India for its 2021 Asian Le Mans Series campaign. He’ll be driving alongside Karthikeyan and Naveen Rao for what will be the first all-Indian team to compete internationally in endurance racing. Kush, meanwhile, finished 2nd overall in the 2020 British F3 championship and will be racing in the F3 Asian Championship later this month with an all-Indian team backed by Mumbai Falcons.

The Maini brothers ended up dividing all the race wins between themselves. But since Kush only competed in a select number of rounds, Arjun ended up clinching the title with a 31 point lead over MSport’s Shahan Ali Mohsin.

Moreover, the outing proved to be a crucial learning experience for the academy’s two rookie drivers. “We achieved what we set out to do, most importantly in the development of young drivers from India. Also it was a great effort from CRG in giving us a dominant chassis specially made for our Indian track conditions,” said Karthikeyan, who himself participated in a few races as a guest driver.

Birel Art’s Rishon Rajeev didn’t have the best start to the weekend, missing out on victory in the first three races. But he found his rhythm soon enough and went on to win the final three races to clinch the Junior Max title. He also ended up winning the ‘Best Driver of the Year’ award for his consistent performance.

Rohaan Madesh’s younger brother Ishaan took a fairly comfortable championship win the Micro Max category. He ended up winning the title by a hefty 32 points from Birel Art’s Aditya Suresh Kamat and even won the awards for the most number of pole positions and wins through the season. Kamat was, however, declared the best newcomer of the championship.