Hamilton led a strong Mercedes 1-2 finish, while both Ferraris retired after colliding on the opening lap. 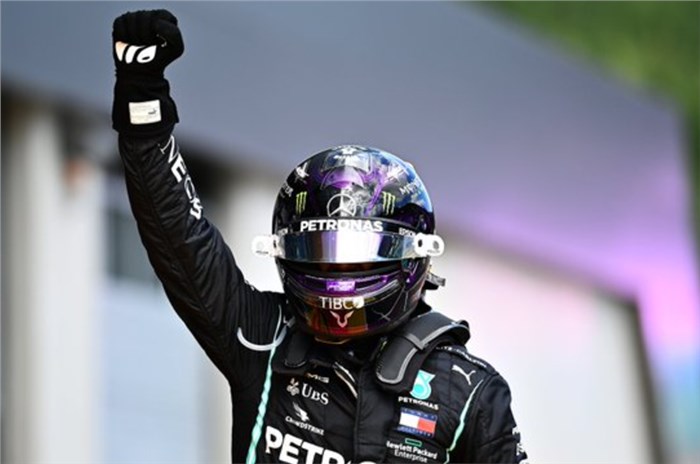 Lewis Hamilton made up for a frustrating result at Formula 1’s 2020 season-opening Austrian GP last week, bouncing back to secure a commanding victory at the Styrian GP – the second round of the season held at Austria’s Red Bull Ring. Behind him, Valtteri Bottas beat Max Verstappen to hand Mercedes its first 1-2 finish of the year. But while Mercedes seemed to get things right at this second outing in Austria, Ferrari encountered a disastrous race with both Sebastian Vettel and Charles Leclerc retiring after colliding on the opening lap.

A masterful drive in tricky wet conditions saw Hamilton snatch pole position by a mighty 1.216 secs from Verstappen.  The British driver followed up his impressive form in qualifying, with an equally masterful display of control to seal his 85th F1 win.

Speaking after the race, Hamilton said: “What a weird year it is. It’s great to be back out here and to be driving and driving with this kind of performance. The team did a fantastic job with the strategy and it was just up to me to keep it together, keep off the kerbs and bring it home,”

“I’m so grateful to be back in first place and honestly it feels like a long time coming since the last race last year. To come back this year after a difficult first weekend last week, this is a great step forward.”

After qualifying in 4th place, last week’s race winner Bottas did well to limit damage and hold on to his overall lead in the drivers’ championship. He made a key move past Sainz on lap 6, and then set about trying to catch Verstappen.

With Mercedes deciding to keep him out for a longer first stint, he’d emerged around eight seconds behind Verstappen after pitting for soft tyres on lap 35. At the time, both drivers were nursing minor issues, with Bottas running with a damaged rear deflector and Verstappen suffering some front wing damage. Nevertheless, Bottas used his fresher tyres to close up to Verstappen and after a brief scuffle, managed to pass the Red Bull driver to take 2nd place.

Following a disappointing run last week, Ferrari brought in some updates for the second outing in Austria. But the Italian team ended up struggling in the wet conditions in qualifying – while Vettel qualified in 10th place, Leclerc slotted into 14th place after being handed a three-place grid penalty for impeding Daniil Kvyat during qualifying.

Things went from bad to worse during the race. As the pack bunched up, Leclerc tried to pass Vettel down the inside at Turn 3, but the two made contact in the process. The kerbs launched Leclerc’s SF1000 onto the rear of Vettel’s car, leaving Vettel with a broken rear wing and Leclerc with extensive front wing and floor damage. Both cars ended up retiring from the race in quick succession as a result.

While the stewards didn’t take action against either driver, in the aftermath of the incident, Leclerc did admit that he was too optimistic while making the move: “I apologisedd to Seb [Vettel]. Obviously, excuses are not enough in times like these and I am just disappointed in myself,”

“But I will learn from this and come back stronger. It’s a hard time for the team and we don’t need that. All the efforts of the team are in the bin. I am very sorry,” he added.

The Red Bull Ring served up yet another exciting last-lap battle. After pulling off some impressive overtaking moves to make his way up the field, Racing Point’s Sergio Perez was running with front wing damage following a tussle with Albon. Behind him, his team-mate Lance Stroll was able to pass Daniel Ricciardo at Turn 3 to move up to 6th place. But Lando Norris soon joined in on the action, and passed both Ricciardo and Stroll in quick succession. With just a few corners remaining, he was able to successfully overtake Perez into Turn 10, to hand McLaren yet another strong finish following his 3rd place result last week.

All this action set the stage for a photo finish, with Perez narrowly holding on to take 6th place, ahead of Stroll and Ricciardo. Carlos Sainz and Kvyat rounded up the top 10, but Sainz did nab an extra point for setting the fastest lap of the race.

Elsewhere, reliability gremlins continue to affect Renault, who just recently confirmed that Fernando Alonso would be returning to F1 next year with the team. Aside from the two Ferraris, Esteban Ocon was the only other driver who retired from the race, having to stop due to a suspected cooling issue.

F1 will now head to the Hungaroring in Budapest for round three of the 2020 season next week. While the Red Bull Ring put the focus on engine power, the Hungaroring is a more downforce-dependent track. So it should be interesting to see if that produces any changes in the order.