Thrilling 2021 F1 season opener saw Hamilton and Verstappen scrap it out till the very last lap of the race in the desert. 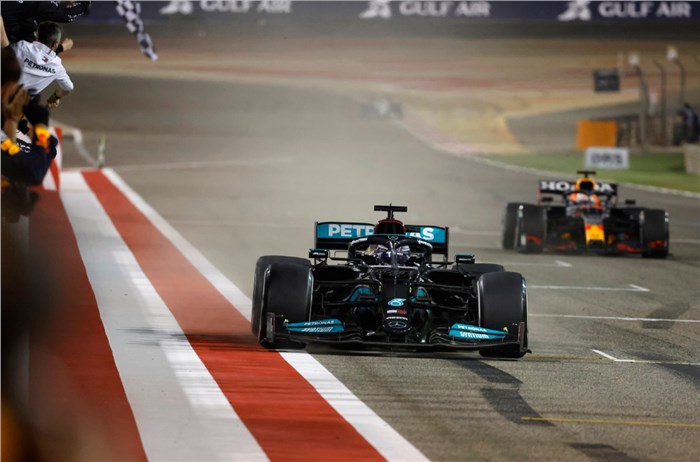 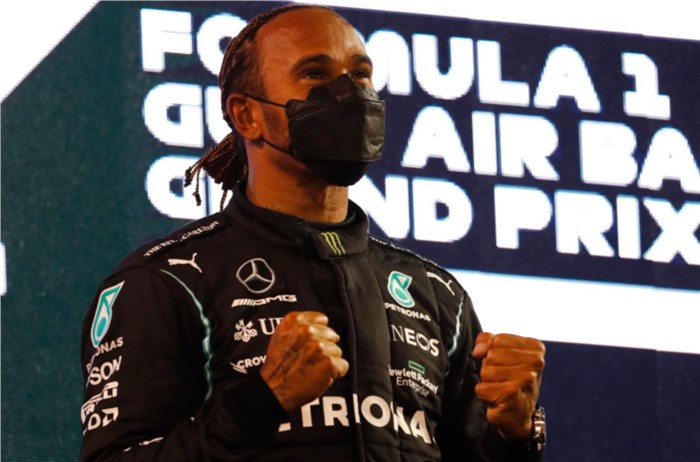 Lewis Hamilton successfully held off a late charge from Max Verstappen to win the Bahrain GP, as the 2021 Formula 1 season got off to a cracker of a start. F1 fans have been asking for a close battle for victory and that’s exactly what they got as the tense dogfight between the two went right down to the chequered flag.

Bottas, meanwhile, completed the podium, 37.383 secs down the road after a slow pitstop. Read on to catch up on all the action from the 2021 F1 season opener.

Holding on to his pole position advantage, Verstappen led the race in the opening stages. But an undercut worked in Hamilton’s favour when Mercedes decided to pit him fairly early on. Hamilton then took his second pitstop on lap 29, while Verstappen took his 10 laps later, setting the stage for a nail-biting finish.

Verstappen made some significant headway, making full use his fresh rubber to catch up to Hamilton. With just four laps to go, the Red Bull Racing driver swept past the reigning world champion into Turn 4 to take the lead. But there was a catch – he’d exceeded track limits while doing so and had to give the place back to Hamilton soon after.

That would prove to be Verstappen’s last chance, as his tyres started to lose grip after all those laps spent in Hamilton’s turbulent air. Hamilton expertly used his ERS (Energy Recovery System) to just about hold off Verstappen, and crossed the line to take his 96th victory by a margin of 0.7 sec.

In hindsight, Verstappen could have let Hamilton past on a better part of the track, one that wouldn’t allow him to break away. But one thing is clear – Red Bull Racing have delivered on their pre-season testing promise and hopefully this means there will be more such battles in the coming races.

“Wow, what a difficult race that was. Definitely stopping early, we knew it was going to be difficult, but we had to cover Max. They’ve had amazing performance all weekend, so it was going to take something special. We stopped for that last stint and tried to find the right balance not pushing too much and having tyres for the end of the race,” Hamilton said.

“It was difficult and Max was right all over me right at the end and I just about managed to hold him off. It was one of the hardest races I’ve had for a while. So I’m really grateful for it and massively thankful to the men and women back at the factory and here also for continuously pushing the boundaries and never giving up, even if we do feel we’re behind”

Bottas was in the hunt for victory for a while, but those chances were wiped away following a slow pitstop that kept him stationary for 10.9 secs. He had to settle for 3rd place, but as some consolation, he did bag an extra point for setting the fastest lap of the race. Behind him, Lando Norris equaled his result from the 2020 Bahrain GP, securing a 4th place finish for McLaren.

While Sergio Perez didn’t finish on the podium, he’s made quite an impression on his debut race for Red Bull Racing. He was forced to start from the end of the pit lane after a technical glitch on the formation lap. But the Mexican driver battled up the order and recovered to finish 5th.

Ferrari seem to be in much better shape than last year- Charles Leclerc finished 6th, while Carlos Sainz finished 8th. The Ferrari drivers were split by Daniel Ricciardo in 7th place in the second McLaren car. AlphaTauri’s Yuki Tsunoda was 9th, an impressive result as he scored points on his F1 debut.

Lance Stroll rounded out the top 10 for Aston Martin. Overall, it was a rather difficult race for the British squad, with Team Principal Otmar Szafnauer admitting that the team has taken a “big step back” due to the new aero regulations.

Sebastian Vettel suffered a rather dismal debut for the team. He had to start all the way from the back of the grid after being handed a five-place grid penalty for ignoring yellow flags in qualifying. While trying to make a one-stop strategy work, the German then hit the rear of Esteban Ocon’s Alpine. Stewards handed Vettel a 10-second time penalty for the incident, dropping him to 15th place in the overall order.

Fernando Alonso, meanwhile, had to retire on his F1 return after a rear brake issue on his Alpine A521 racer. Other retirements of the day included Nikita Mazepin (who spun out on the opening lap), Pierre Gasly and Nicholas Latifi.

F1 will return to action on April 16-18 for the Emilia Romagna GP at the Imola circuit.