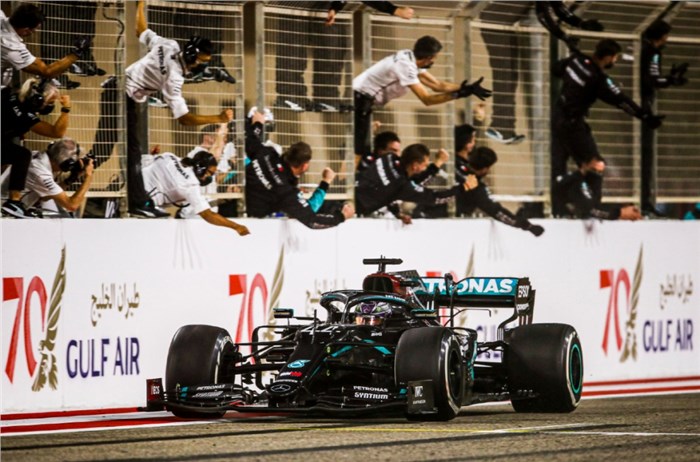 Newly-crowned seven time F1 world champion Lewis Hamilton took a dominant win at the Bahrain GP, but it was Romain Grosjean’s crash that overshadowed proceedings. The Haas driver miraculously escaped the horrific crash, that left his car split in half and engulfed in flames, with only minor injuries

Red Bull Racing had both of its drivers finish on the podium, with Max Verstappen 2nd and Alexander Albon 3rd after a late-race engine failure.

The 2020 Bahrain GP was red flagged after just three corners following Grosjean’s crash. The Frenchman made contact with AlphaTauri’s Daniil Kvyat at the exit of Turn 3, which launched his car into the barrier at high speed. The force of the impact split the car in two, before bursting into flames.

The medical crew and marshals where quick on the scene. To everyone’s relief, Grosjean was able to pull himself out of the burning wreckage and was later airlifted to a hospital. Haas have since confirmed that he has suffered some minor burns on his hands and ankles, but is otherwise okay.

The incident is testament to all the safety advancements made in F1, including the effectiveness of the halo device. 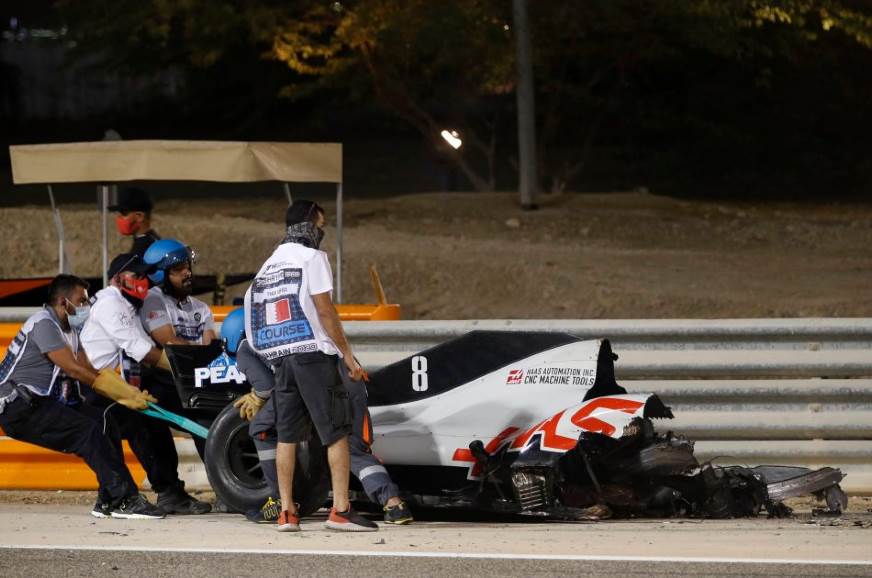 The race saw a lengthy stoppage as the barriers were being repaired. And just as the racing got underway again, the safety car was called out after Lance Stroll’s Racing Point car ended up upside down following a scuffle with Kvyat.

Once the race resumed again, Hamilton appeared to have everything under control out at front. Having clinched the F1 2020 title in the previous race, the pressure was off Hamilton, but he put on yet another dominant display on course to clinching victory.

Even in the aftermath of his victory, Hamilton paid tribute to the marshals and medical teams on site. “What a crazy day. I’m so glad that both Romain and Lance were able to walk away from their accidents today. I’m wishing you both a speedy recovery,” the Briton said in a statement posted on his social media.

“That was a tough race overall, I’m sure the other drivers felt it too. It’s a reminder to us and hopefully to the people who are watching that this is a dangerous sport. Whilst we’re out there pushing the limits, we have to respect it. So grateful to the marshals and medical teams for the work they’ve done to put safety first today. I’m so thankful to my team, they did a great job with the strategy and what a privilege this is to get another podium.”

Perez misses out on podium finish

While Verstappen was never able to truly challenge Hamilton for victory, he did score a rather comfortable 2nd place result. Behind him, it looked like Sergio Perez was on his way to score a podium finish, but he suffered an engine failure with just three laps to go. This promoted Albon to third place, handing the Red Bull Racing driver his second podium this season.

A one-stop strategy paid off for AlphaTauri’s Pierre Gasly as he scored a 6th place result ahead of Renault’s Daniel Ricciardo. Valtteri Bottas suffered another disappointing race, with a puncture on the Lap 3 restart dropping him to the back of the field. He could only recover to finish 8th. Esteban Ocon finished 9th in the second Renault car, while Ferrari’s Charles Leclerc rounded out the top 10.

F1 will be back next week with its penultimate round being held on the quick outer track of the Bahrain International Circuit for the first time. With this layout covering just 3.543Km, sub-one minute lap times could very well be a possibility.