The first race of the 2020 MotoGP season saw Quartararo take home his first win, with Vinales and Dovizioso rounding up the podium. 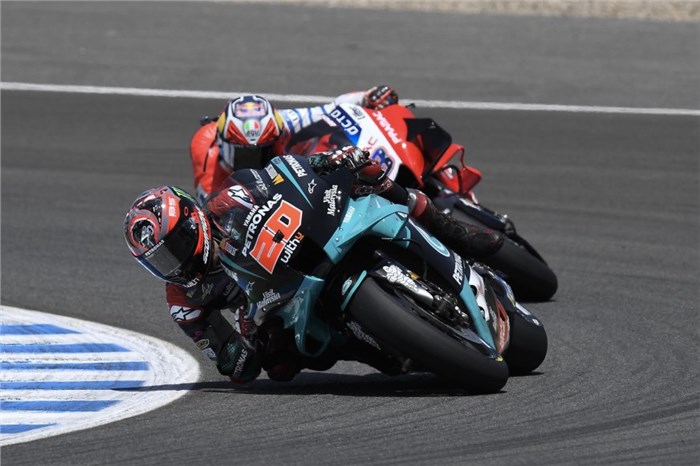 After eight long months of waiting, the 2020 MotoGP season witnessed its first race at the Jerez Circuit in Spain. At the end of a spectacular 25 laps, Fabio Quartararo clinched his maiden victory in the premier class, after starting from pole position.

Quartararo’s victory didn’t come easy; he fell back to 4th position at the end of the first lap, with Maverick Vinales, Marc Marquez and Jack Miller in front of him.

Vinales managed to hold onto the lead for two laps, before Marquez swooped past on the inside. But on lap 5, the reigning champion lost traction of his front tyre at Turn 4, and if not for a spectacular save, it could have been the end of his race. The Spaniard rejoined the track in 16th place and began to charge his way back up the order.

At the front, Quartararo managed to get past Miller and was hot on Vinales’ tail for the lead. At the end of lap 8, a mistake from Vinales saw him run wide, allowing Quartararo and Miller past. The top three remained uncontested for the next 10 laps.

With six laps remaining, Márquez passed Dovizioso for 4th place. A lap later, he was up to 3rd place and looking to make a move on Vinales. Unfortunately, the Spaniard suffered a horrific high-side at Turn 3, ending his race. The crash also left him with a fractured right humerus,which will require surgery. As a result, he’s going to have to skip this weekend’s Andalusian MotoGP race at the same Jerez Circuit, and it also casts doubt on whether he’ll be able to compete in the rounds in the Czech Republic and Austria.

Ducati's Andrea Dovizioso –who himself just recovered from a broken collarbone – crossed the line to secure a hard-earned 3rd-place finish, behind Vinales who took 2nd place. In 4th place was Jack Miller – who will be joining the factory Ducati team next season – followed by Petronas Yamaha SRT rider Franco Morbidelli. Quartararo’s win and Morbidelli’s 5th-place result means the satellite team currently leads the constructor’s championship.

There were only 15 finishers at the race in Jerez. Rossi seemed to have suffered a technical issue, with seven laps to go, and pulled out of the race. Iker Lecuona, Aleix Espargaro and Joan Mir add to the list of DNFs. Cal Crutchlow and Alex Rins did not start the race, owing to separate crashes earlier in the weekend.

Next weekend, the MotoGP paddock returns to Jerez for the Andalusia MotoGP. You can head here for the full calendar.