Toyota has launched the mighty Land Cruiser with a big twin-turbo diesel V8. Meet the new king of Indian roads. 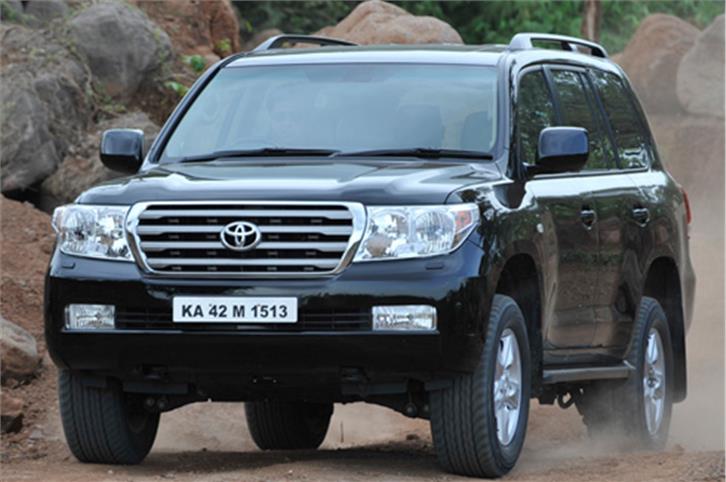 Toyota has launched the mighty Land Cruiser with a big twin-turbo diesel V8. Meet the new king of Indian roads.Kings of the road is a loosely used term for SUVs. Big, tall and invincible, they command respect from other users who meekly give way to these vehicles that are at the top of the ‘might is right’ pecking order. But if there is a king among kings, it is Toyota’s massive Land Cruiser which dwarfs every other SUV in the market and has a special air of indestructibility. ‘It never breaks down’ is what Toyota officials said with confidence at the Indian launch. That’s a pretty bold statement to make but its legendary reputation for reliability is backed up by the simple fact that in the most inhospitable regions of the world and every war zone, it’s the Land Cruiser that is everyone’s favourite. Ask the UN.

It’s this aura that has made it popular with Bollywood, industrialists and politicians. Not that they want to zip across the Thar desert or dodge bullets along the Line of Control but because the Cruiser gives them an unmatched sense of security and protection.

You know the feeling when you walk up to the Land Cruiser. That towering grille is virtually at eye level for someone as short as me. The XXL proportions make it hugely intimidating from any angle. It’s nearly five metres long and two metres wide to give it possibly the widest footprint on four wheels this side of an LCV. Even the massive 18-inch wheels look tiny, emphasising the sheer size of the car. The exterior design is a little slab-sided and not particularly stylish. But the square-jawed looks underscore the big Toyota’s tough credentials. The gigantic grille is matched with huge headlamps which, apart from giving the front a sense of proportion, work very well. The dipped beam is wide and has excellent fill while the full beam is one of the most powerful we have experienced, well up to lighting up the Rann of Kutch. The rear tailgate has a split opening, the lower portion of which can be used as a seat (it’s a bit high though). 4x4 purists (not too many of them around) would say the smart running board limits off-roadability but you need that step to climb into the cabin.

The lofty driving position in the Land Cruiser is amazing. Set the adjustable dampers on max ride height and this huge SUV rises 10cm like a giant elevator. The view is so commanding that you are actually looking down on Safaris and Scorpios! Look around and you can see that there’s a luxury feel to the cabin that befits a Lexus. The quality of materials is great and there’s no shortage of equipment. There’s a fabulous touch screen which makes navigating through a multiple of functions very easy. The climate control is very sophisticated and so is the audio system. In fact, in keeping with the Land Cruiser’s image of excess, there are 10 airbags, 28 cubbyholes and 14 JBL speakers! The interior space is living-room size. The extra width makes it easy for three to sit in the middle row which has loads of leg- and headroom. Despite the high floor, under-thigh support is decent as well. The third row too has reasonable space but is short on under-thigh support. The rear seats fold sideways and encroach on luggage space but the boot still holds a humongous 1,267 litres!

Most 4x4 manufacturers have adopted monocoque chassis for their off-roaders, but Toyota has resisted with the latest Land Cruiser which retains a separate ladder chassis. Toyota proclaims this to be an affirmation of the Land Cruiser’s off-road credentials and it also makes repair far easier in those parts of the world without access to laser-guided bodyshop rigs. However, the downside of separate body-on-frame or a ladder chassis is poor structural rigidity, which is why Toyota has used hydroformed chassis members and high tensile steel in the frame. The extra strength has brought bulk too — the Land Cruiser tips the scales at a substantial 2,720kg.

The Land Cruiser is powered by a 4.5-litre twin-turbo V8 diesel that produces 285bhp and a Rajdhani- embarrassing 66kgm of torque with a curve that looks like the Tibetan plateau. All that pulling power manages to overcome the Land Cruiser’s sheer weight and size to make it reasonably quick. The dash to 100kph is dispatched in an impressive 13.10 seconds and the Land Cruiser keeps barreling on to cross the 150kph mark in 31.83sec. You really don’t expect an SUV that’s more at home in the Amazon than on the autobahn to be so quick but for some customers, who may have to run from the Taliban in deep Afghanistan, the Land Cruiser’s turn of speed can be quite handy.

The raw performance figures only tell part of the story. This engine’s pair of low-inertia turbos mean there is almost no turbo-lag. Part-throttle response is fantastic and the Land Cruiser is always prepared to lunge forward in a manner that belies its size. The six-speed transmission has an initial delay but is quite responsive once you get going.

With a ladder chassis and the sort of massively over-specced suspension necessary to venture where no roads exist, hopes for the Land Cruiser’s on-road driving manners are not high. Yet, with the obvious proviso that it doesn’t drive like a BMW X5, the Land Cruiser manages to exceed expectations across the board. In large part, this is due to the adaptive dampers which can be switched between sport, standard and comfort modes. Unlike most systems, a genuine difference can be felt between the different modes. In the softest setting, undulations and uneven surfaces create a heaving motion while in the firmest sport setting, sharp edges allow judders to enter the cabin — typical of a ladder chassis. However, stiffening the dampers keeps everything lashed down at high speeds which, in addition to the excellent refinement, makes the Land Cruiser an accomplished highway cruiser.

Twisty roads are more of a challenge and though the Land Cruiser always feels safe and predictable, it doesn’t have conventional car-like manners of other premium soft-roaders. The fat tyres generate great grip and the brakes are terrific as well. The stability control ensures that everything is pointing in the right direction. It’s hard to replicate the feeling of invincibility the Land Cruiser exudes, which is why most Indians will buy it. It’s an incredibly safe and reliable way to get around in a hushed ambience that resembles your living room. No doubt there will be takers for this one, even if the over-the-top price of Rs 83 lakh is also XXL.