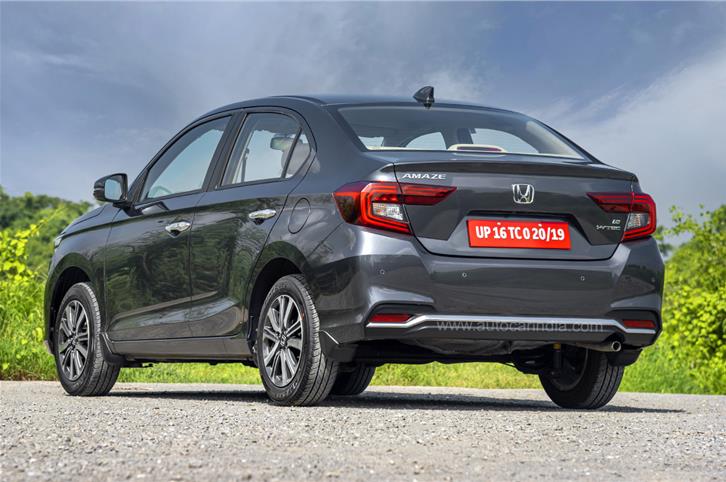 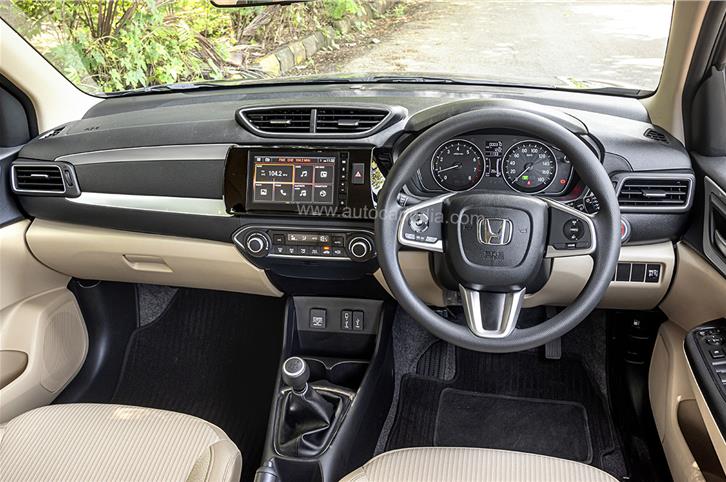 Honda’s compact sedan gets a visual update for 2021.

This is the first facelift the Honda Amaze has received since the second-gen model made its India debut in 2018. Honda has clearly gone for the “if it ain’t broke, don’t fix it” approach, as apart from some cosmetic tweaks on the interior and exterior, the Amaze remains largely unchanged. In its defence though, this is not entirely bad, as the Amaze was a pretty well-rounded package to begin with. This review, then, will be equal parts on what’s new and a recap of what we know of the Amaze already.

At first glance, you would be forgiven for mistaking the new Amaze for the pre-facelift model. Overall styling is unchanged and the differences are in the details. The grille, for instance, retains the thick band of chrome. But lower down, the mesh has made way for sleeker slats. And while the headlights are familiar, top-spec VX versions now get LED projector units with LED Daytime Running Lamps. The front bumper has also been tweaked with new chrome surrounds for the fog lamp housings. 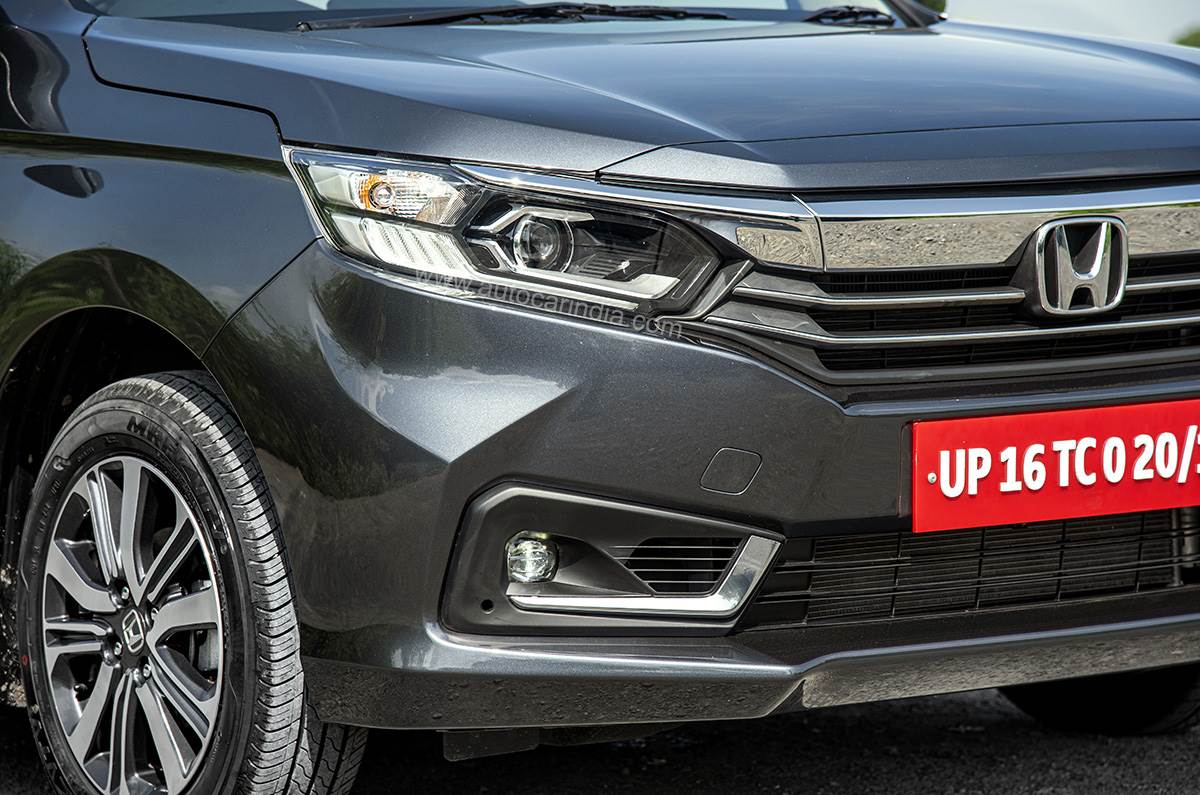 LED projector headlights are new for the Amaze and are offered in the top-spec VX trim.

Chrome door handles at the sides add some flash value, but the Amaze’s new diamond-cut alloy wheels do the most to uplift the look. Still, broader tyres would have helped. There are changes at the rear too, with the new C-shaped LED elements at the tail-lights, and a revised rear bumper with a chrome accent at the bottom.

Small as the changes are, they do add up to make the new Amaze look a little more premium than before. The C-shaped LED elements in the taillights add to the more upmarket look.

Save for the incorporation of silver accents on the dashboard, door cards and steering wheel, there’s nothing new to report about the 2021 Amaze’s interior. In a nutshell, this is a practical and thoughtfully-styled cabin that offers a great driving position, good visibility, easy access to controls and lots of space to store small items. The dual-tone black and beige interior colour scheme is carried over from before too and does its bit to make this feel like a relatively premium space, even if the plastics aren’t quite at par with the best in the segment. Silver accents help distinguish the interior from the pre-facelift model.

In terms of seating, the front seats offer good cushioning and support, and are quite accommodating even for larger drivers. The seating position is quite good with the height adjustable driver’s seat helping with that. Ergonomics are good for the most part as all the relevant controls fall to hand nicely. However, you’d do well to opt for a front centre armrest that’s on offer as an optional accessory. There are also a number of convenient storages spaces up front, though the slot for storing your phone isn’t big enough to accommodate the largest of phones. 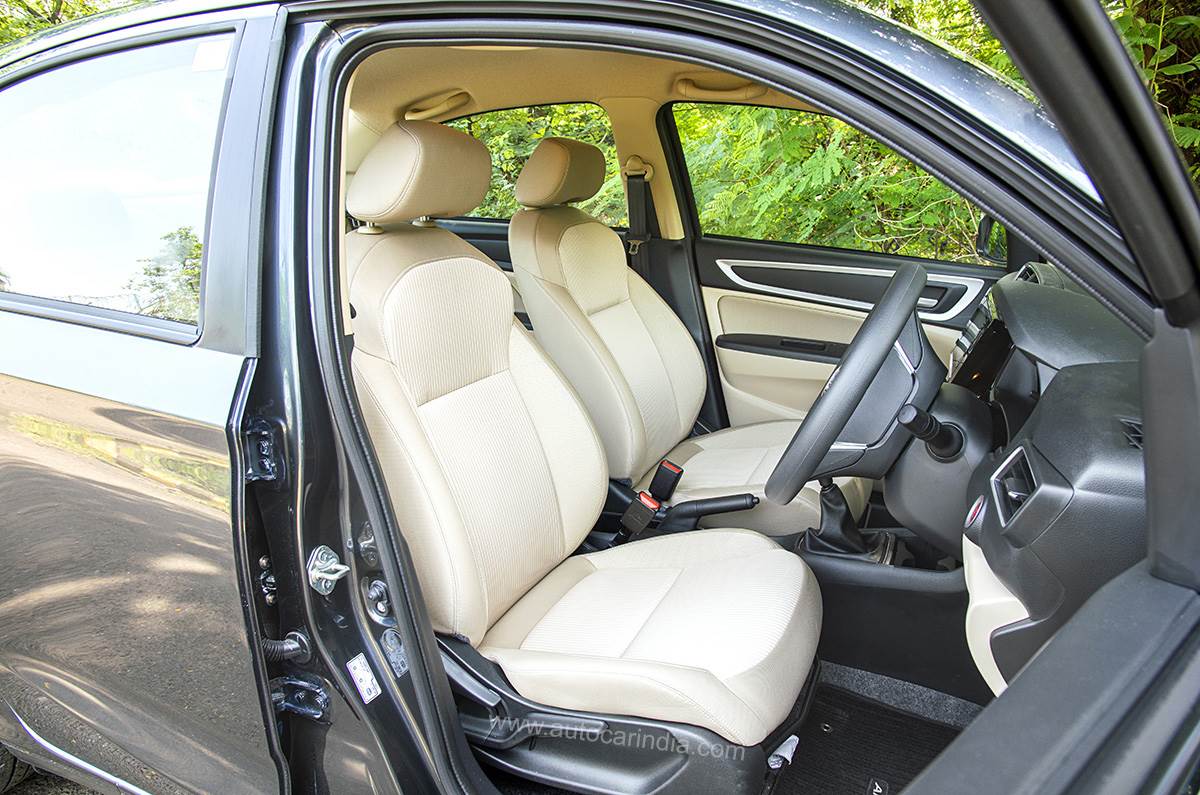 Front seats provide a good amount of support and are well cushioned.

The rear seats are also very well cushioned, and rear occupants get good levels of knee room and under thigh support. But headroom can be tight for taller passengers. Additionally, while the rear seats could accommodate three passengers, it is best suited for two occupants as it is not too wide. Another quirk at the rear is the positioning of the centre armrest, which is a bit too low for most people to comfortably use. Honda has also missed out on equipping the Amaze with a rear air-con vent, and perhaps more importantly, adjustable rear headrests. The fixed rear headrests are small and will provide minimal support in the unfortunate event of a collision. Rear seats are comfortable and offer plenty of knee room, though headroom is insufficient for taller occupants.

Elsewhere, the Amaze’s feature list is par for the course as compact sedans go though like-priced compact SUVs like the Nissan Magnite get you a few more frills. As before, in fully-loaded VX trim, the Amaze gets automatic climate control, steering mounted controls and digital MID. The 7.0-inch touchscreen infotainment with Android Auto and Apple CarPlay, has also been carried forward. While the screen responds well to the touch and is fairly easy to use, its user interface looks dated and a tad aftermarket. 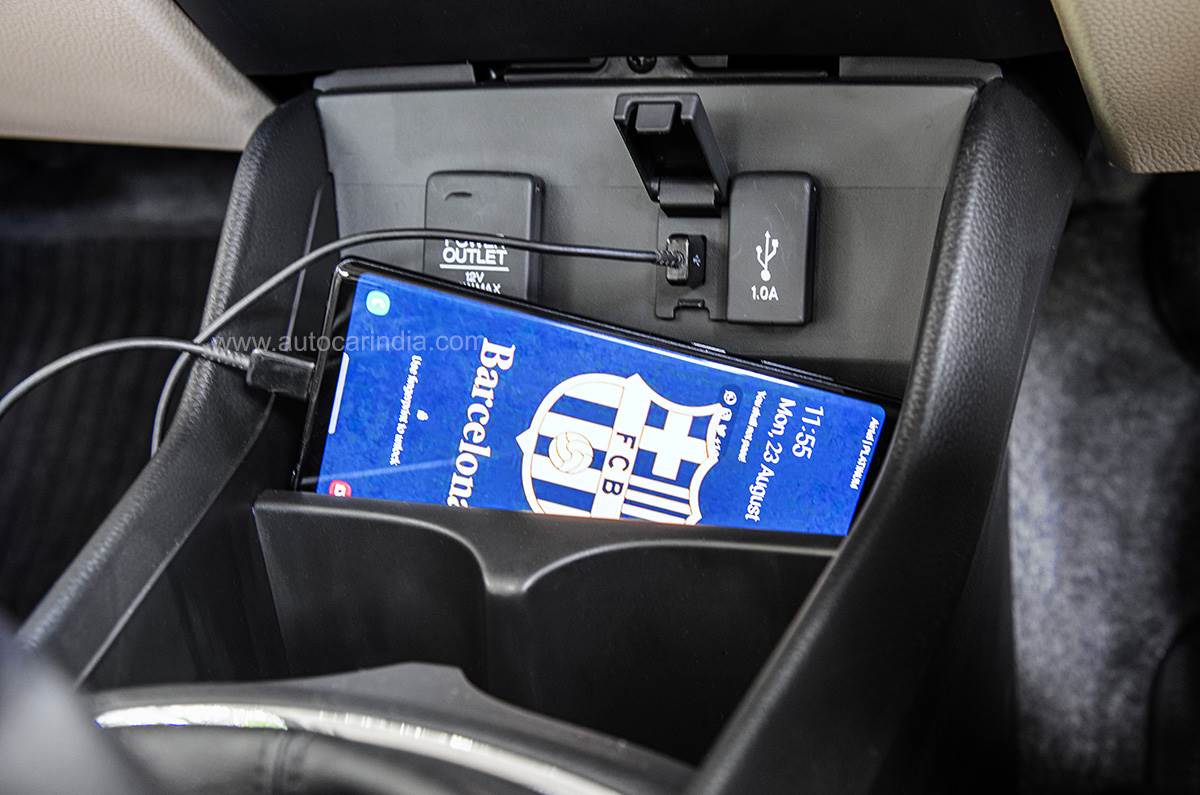 Larger phones don't fit in the storage cubby up front.

In terms of safety, all versions of the Amaze get dual airbags, ABS with EBD, ISOFIX child seat mounts and rear parking sensors. The top-spec's rear view camera, however, has been enhanced with three views – normal, wide-angle and top-down. Automatic headlights are also part of the package. 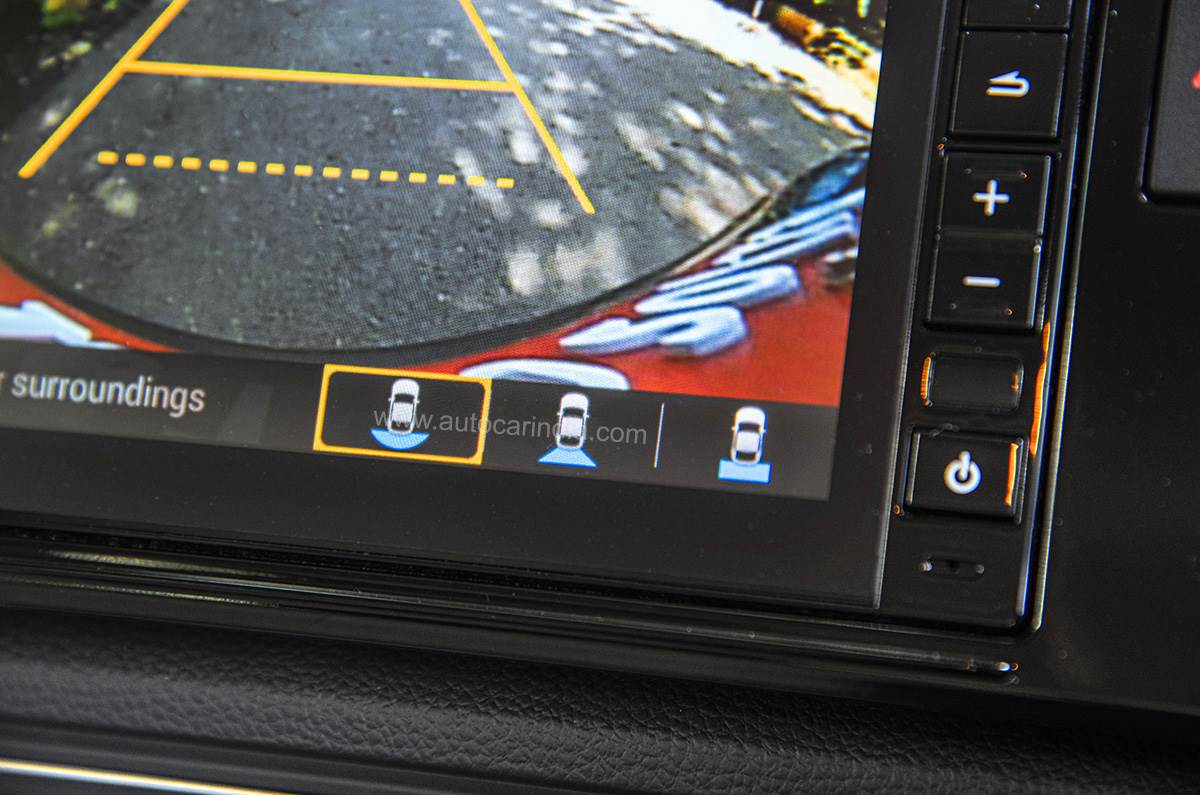 The additional views offered by the rear camera come in handy while parking.

As before, one of the key pulls on the Amaze remains its boot. Measuring 420 litres, the boot can easily accommodate large suitcases making this little Honda among the most practical sub-4m cars you can buy. 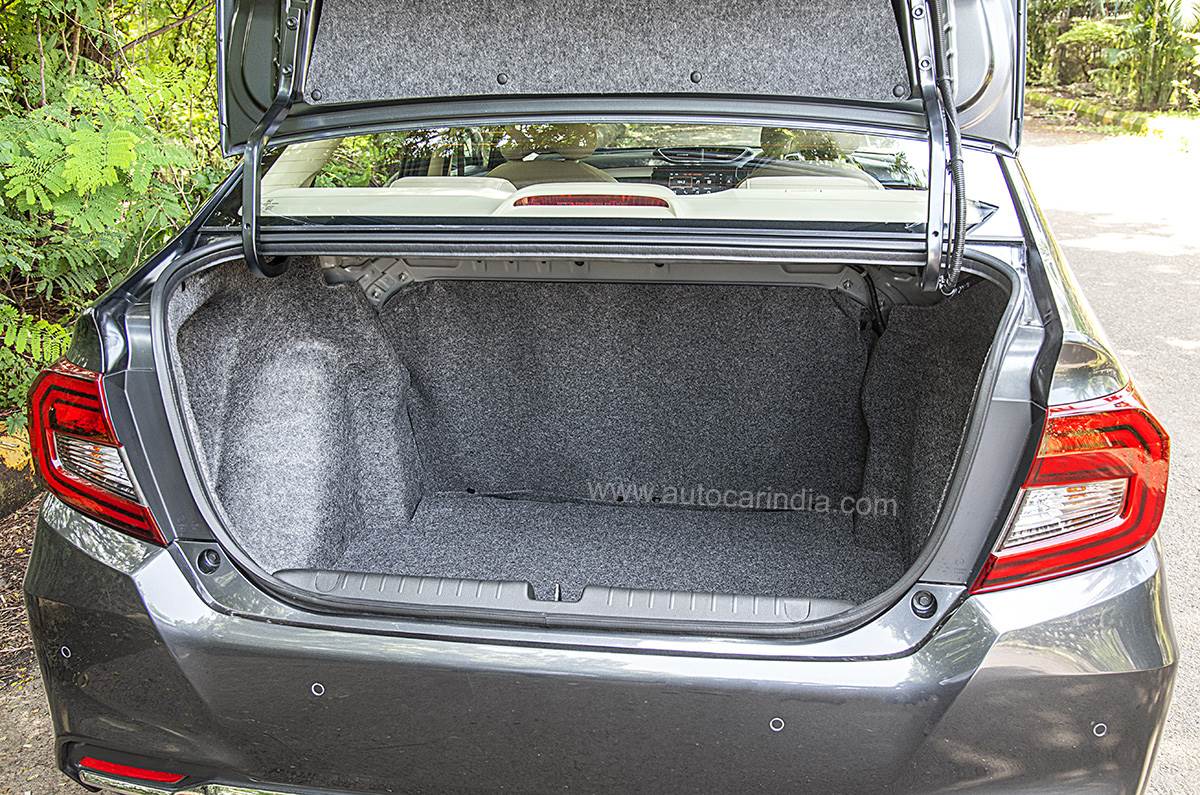 420-litres of boot space is plenty for a few large suitcases. 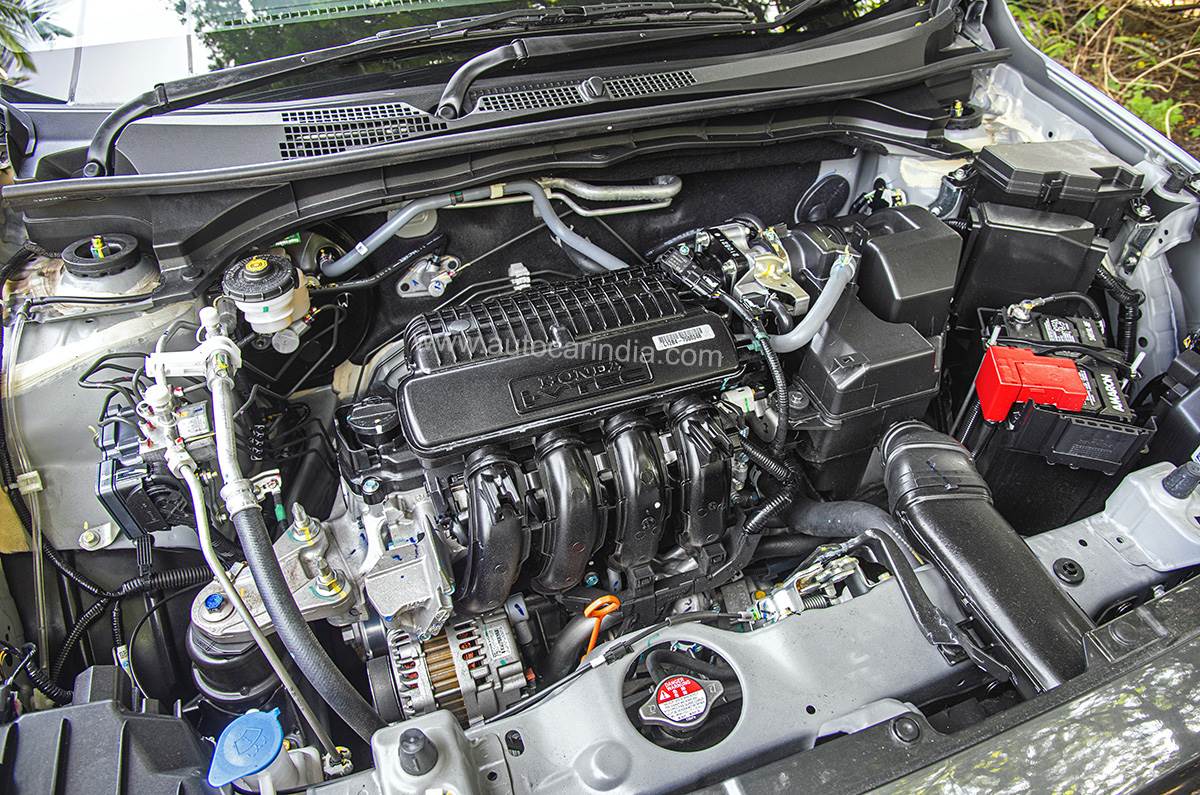 We got to sample the petrol-manual version, which feels just like it did before. The 1.2-litre naturally aspirated engine is quite refined, especially at idle – with noise and vibrations being well contained. The Amaze petrol gets going easily and will keep up with the flow of traffic with ease. However, the mid-range is flat and this warrants a downshift if you want to make a quick overtake. The tall fourth gear makes this more of an issue at highway speeds. The weak mid-range of the i-VTEC motor is most noticeable out on the highway.

True to the VTEC badge, the engine does have an exciting top-end, and on an empty stretch of road you will like revving the engine to its 6,600rpm redline. The 5-speed manual gearbox is also fun to use and slots into gear nicely, though a shorter throw would have made it even better. Still, for city-based owners, the CVT is what one should go for.

Ride is an area where the Amaze has excelled at since its launch and this remains true even for the facelifted model. The way Honda has set-up the Amaze’s suspension, helps it deal with bad roads effortlessly and smoothens out even larger imperfections and potholes. Suspension noise is well contained too but overall noise insulation isn’t great. There is also a fair bit of road noise that creeps into the cabin at higher speeds. Ride quality is one of the Amaze's strong suits.

The Amaze handles pretty well too, as it turns in well and stays stable through the corners. The light steering, though convenient and great for manoeuvring around town, won’t excite keen drivers. That said, the Amaze still feels fairly stable doing triple-digit speeds on the highway.

You could argue that similar money will get you a premium hatchback or even a compact SUV. However, there is a large pool of buyers for whom the sedan shape is tied to the image of moving up in life. And it’s this buyer, typically looking for a family car, that the Honda Amaze and other compact sedans cater to without breaking the bank. In that sense, the small visual updates do their job of uplifting the Amaze’s look. A Maruti Dzire petrol is peppier, a Hyundai Aura feels a little more premium, a Tata Tigor is more VFM, and a 6 airbag-equipped Ford Aspire might come across as safer. But as a sensible, practical and easy to drive pick, the Honda Amaze continues to score high.