Models will include the Porsche Cayenne Coupe, two Audi SUVs, the replacement for the current Bentley Flying Spur and more. 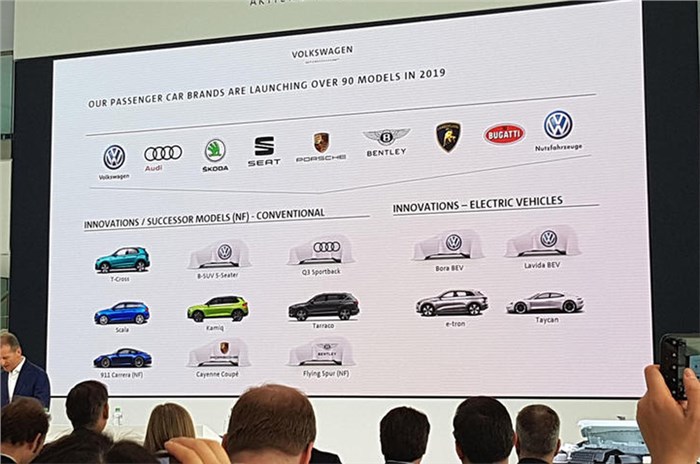 The Volkswagen Group has officially confirmed six new models, including the Porsche Cayenne Coupe, at its 2018 Annual Conference in Wolfsburg, Germany.

Along with the Cayenne Coupe, the all-new models include the Audi Q3 Sportback and an unnamed B-segment SUV.

A replacement for the current Bentley Flying Spur, as previously reported by our sister publication, Autocar UK, is also due. The final two models – the Volkswagen Bora and Lavida – are already sold in China and will have electric variants launched this year solely for the Chinese market.

The cars appeared on screen briefly during the company’s financial presentation at the annual conference.

The VW Group also revealed that there will be a second wave of as many as 15 new MEB-underpinned electric cars as part of its aim to get to 22 million battery-electric vehicle (BEV) sales by 2025. These are likely to begin arriving from 2022 and follow the first wave, which includes a host of already announced EVs like the Porsche Taycan and Mission E Cross Turismo, the Audi E-tron GT, E-tron Sportback and E-tron, the Volkswagen Buzz, Vizzion, Crozz and ID hatchback, and the Skoda Vision E.

The company also showed predictions that by 2040, 70 percent of the European new car market will made up of BEV sales and about 10-20 percent plug-in electric vehicle sales, although the latter will be powered by fuels made from renewable electricity.

There won't be any all-new budget cars from the Volkswagen Group for the Indian market, at least not until the India-spec Skoda Kamiq SUV comes to India in 2020. It will be followed by the India-spec VW T-Cross SUV and all-new replacements for the Skoda Rapid sedan and Volkswagen Vento sedan. All these models will be based on a heavily localised version of VW's MQB A0 platform and come with the option of a localised 1.0-litre three-cylinder turbo-petrol engine option. In the premium space, the Audi e-tron SUV is expected to launch in the market by end-2019.