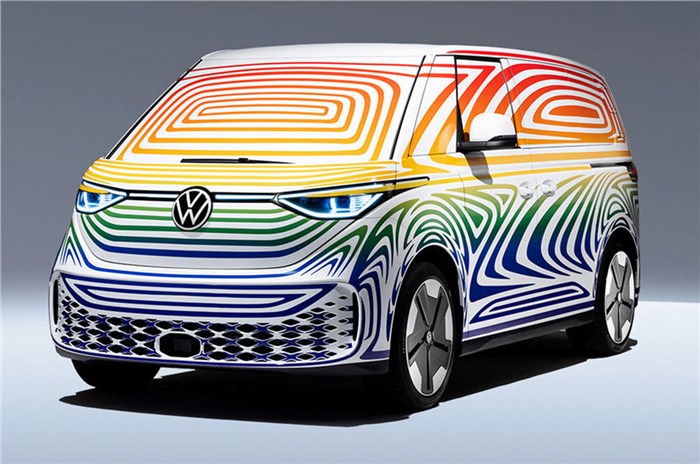 The ID.Buzz is touted to pave the way for Volkswagen’s autonomous driving tech, with level 4 assistance coming by 2025.

The Volkswagen ID.Buzz all-electric van has been in the making for some time, and now Volkswagen has finally announced the reveal date for the production-spec model. The long-anticipated retro-styled ID.Buzz will premiere on March 9, a date that was revealed on social media by Volkswagen and its CEO Herbert Diess.

Many of the earlier concept’s styling cues have also been toned down, giving the new ID model a cleaner and, perhaps, less heavily contrived look than originally expected.

Key exterior design details exposed in the latest photographs include angular headlights that wrap into the front wings. They are connected by a light band that runs through a large VW badge featured prominently on an angled bonnet. Lower down, there is a full-width grille similar to that of the concept.

As with the Microbus, the production version of the ID.Buzz adopts two conventional front-hinged doors at the front and two parallel sliding doors at the rear.

Based on Volkswagen’s MEB electric vehicle platform, the new MPV will be offered in both standard- and long-wheelbase guises – the latter not planned for launch until 2023. Both models will offer a variety of seating layouts and interior configurations.

The production ID.Buzz adopts a squarer shape than the earlier concept in a move that is aimed at providing it with maximum interior space, Volkswagen officials have told our sister publication Autocar UK.

The overall silhouette mirrors that of Volkswagen’s latest internal-combustion-engined Microbus, with which the new ID model is claimed to share elements of its bodyshell, chassis and interior architecture.

It is planned to go on sale in Europe in the latter half of 2022 and will become Volkswagen’s fourth dedicated electric model, following the ID.3, ID.4 and newly unveiled ID.5. It will also be the first ID model to be offered both as a passenger vehicle and a commercial vehicle, with production planned to take place at VW’s commercial vehicle plant in Hannover, Germany starting this year.

Technical details of the new ID model have yet to be announced, although it is expected to share its drivetrain and battery configurations with other ID-badged models.

Significantly, the ID.Buzz is also set to play a crucial role in the launch of Volkswagen’s autonomous driving technology, which the firm is developing in partnership with US start-up Argo AI. From launch this year, it is planned to be equipped with Level 2 semi-autonomous functionality, as seen in other MEB-based models, but Volkswagen says it is working to introduce Level 4 capability in 2025. Volkswagen had even showcased a prototype of the ID.Buzz AD, where AD stands for autonomous driving, at the 2021 Munich Motor Show. It came equipped with cameras, lidar and radar sensors to enable autonomous technology developed by Argo.

Volkswagen Group sibling company Moia has already confirmed it will be the first company to make use of the self-driving functions planned to be made available on the ID.Buzz.

While Volkswagen is running at full pace with regards to its electrification strategy abroad, the brand hasn’t yet spoken about its plans for India. The carmaker is currently focusing on the India 2.0 strategy under which it has seen fairly good success with the Taigun midsize SUV. The second product on the MQB-A0-IN platform will be the all-new Virtus sedan that will finally come as a replacement for the ageing Vento and is slated to launch around April.

What do you think of the Volkswagen ID.Buzz? Let us know in the comments below.