VW MEB platform: The future of the car

Volkswagen’s MEB, the world’s first dedicated modular electric car platform, is rapidly taking shape. And what it promises is nothing short of incredible – an electric car at the price of a diesel! 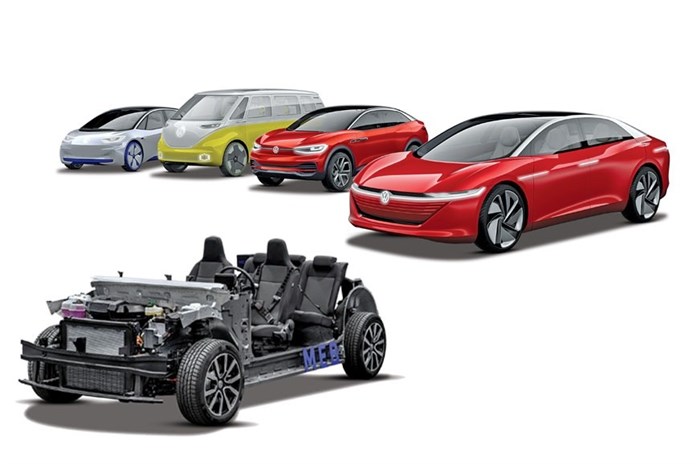 The Volkswagen Group has just released details of its scalable electric car platform, called MEB. Designed and engineered with only electric drive in mind, VW says this new dedicated platform will help take electric cars mainstream by getting around some of the difficult issues that currently plague electric cars. And what it is talking about here is stuff like driving range, the cost of the battery, the charging infrastructure, and, of course, driving pleasure, to name a few.

The biggest hurdle right now, however, isn’t any of the above but the initial cost of acquisition. There’s no beating about the bush – electric cars are seriously expensive. And one of the core reasons for this is that no manufacturer has worked hard at leveraging economies of scale. Genuine mass production, where the cost of each component (battery included) is whittled down, is what is needed, and that’s exactly what VW hopes to do with its all-new architecture and ‘Electric for All’ campaign.

How much of a reduction in cost is there likely to be? VW, incredibly, claims its all-new ID will retail for the same price as a regular diesel-powered hatch like a Golf, the Polo’s elder sister. Current projections in India point to a Rs 6 lakh car going up to around Rs 11 lakh. Of course, VW will initially absorb a lot of the cost, and that will be deferred over the life of the platform, but the fact that it will be so affordable is a huge step forward. How soon can VW begin generating a real profit? It will take a long time but with falling battery prices and greater economies of scale, VW hopes to turn things around by the end of the ‘first wave’.

What has the biggest impact on the price of the electric car is the battery, and VW seems to have chalked out a plan that will eventually lead to more affordable batteries. The carmaker says it will do this by working with partners LG Chem, and later Samsung. And that’s not it: it plans to assemble its own battery packs and make its own cells to allow for even greater economies of scale.

But what kind of numbers are we actually talking about when it comes to the MEB platform? VW plans to start with 1,50,000 cars in the first year of production. And then because the battery and the rest of the platform will be common between the ‘Neo’ hatchback, the ID Cross crossover (to be built in China first), the minivan and at a later stage, the large sedan, VW will be able to bring the cost down even further. Also, like its 2.0-litre diesel engine that is common throughout much of its range, and comes in many power outputs, the battery system will be modular too. The basic, 10 block framework will be the same but all you will need to do if you want to up its capacity is add a few additional battery modules. 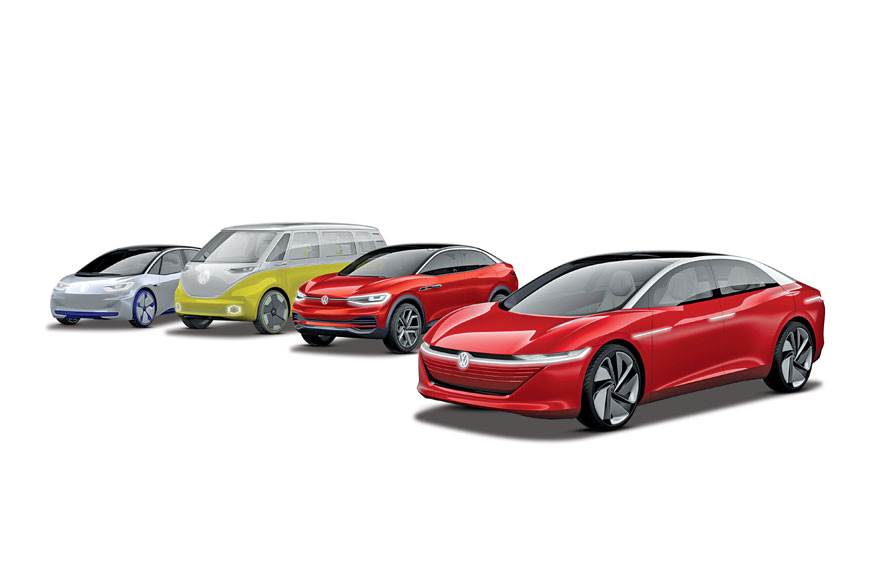 There are currently four models based on the new MEB platform, hatchback included.

As you can imagine, MEB or the Modular Electric Matrix is currently being looked upon as one of its most important VW projects ever, right up there with the Beetle and the Golf. And what gives VW an edge is that no one does platform engineering better, according to Thomas Ulrich, member of the board and the one in charge of electric cars at VW. “Our modular transverse toolkit (MQB, used for its regular cars) has already proved that Volkswagen is one of the most successful platform developers in the auto industry. And now we are transferring this know-how and knowledge to the electric age.” In fact, so strong is the commitment that VW and its sister brands will collectively put 27 all-new electric cars on the market in the next four years.

To achieve this, VW is currently in the process of transforming at least four of its manufacturing and research centres into areas dedicated to electric car research and production. The ‘glass factory’ in Dresden with its moving wooden floor, where the Phaeton (and some Bentleys) were earlier produced, is the first to go all-electric. The ID hatchback or Neo will be produced here in relatively small numbers. And next will be the factory in Zwickau (where Audi was born). This will be the mother plant where full-scale production of MEB cars takes place. VW will also convert its facilities in Braunschweig (battery production), Salzgitter (rotors and stators) and Kassel (full e-motors) to make only electric cars and electric car components. And there will be full-scale electric car production in the Czech Republic, US and China as well. To accomplish this, VW will spend 1.3 billion Euro in Europe alone. And that’s not it. Producing these MEB cars globally will cost VW nothing less than 6 billion Euro.

MEB: A new architecture for a new age

India currently doesn’t figure in VW’s MEB plans, but all this could change, according to a VW spokesman, if the duty structure for electric cars in India and the charging infrastructure improve. Else, things will have to wait until it makes sense to start producing all-electric cars in India.
As you can imagine, a dedicated designed-from-the-ground-up electric car is very different from one that’s been modified to accept an electric powertrain. The latter normally involves throwing out the engine, gearbox and fuel tank, but here, you just don’t need a large bonnet. The best way to spot this, as in the case of the ID, is to take notice of how stubby the nose is. And it just isn’t the nose – where there’s no bulky combustion engine anymore; what also sort of gives the game away is the stretched wheelbase. VW says the Golf-sized ID actually has the interior space of a Passat. The built-to-scale mock-up certainly feels just as spacious, even in the back, and because you are sat at a bit of a height, seat comfort is actually very good. Also, importantly, there’s no transmission tunnel now. 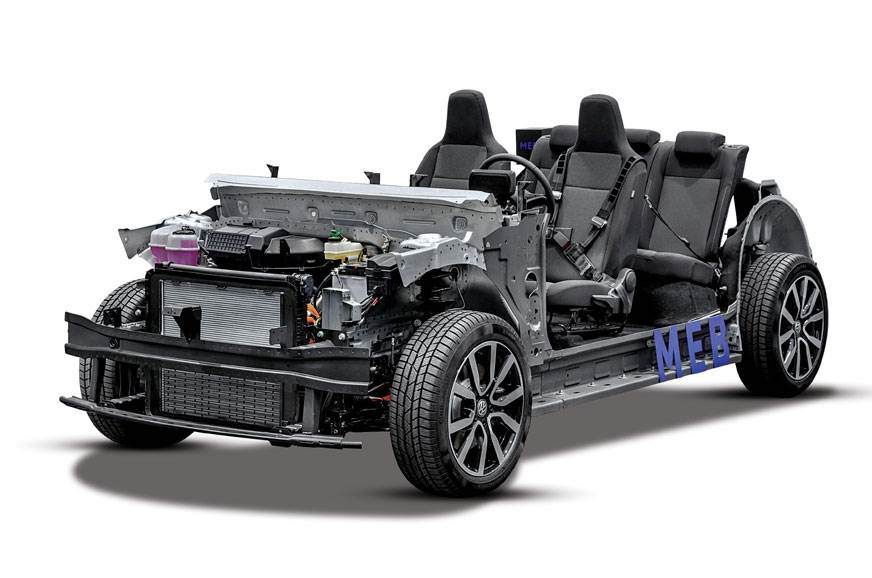 MEB cars have a compact bonnet and the battery sits under the floor.

Of course, what you are sitting on top of is the battery, which in this case is a large rectangular table top-like structure that takes up all the space between the wheels. And that’s the other reason why the wheelbase is so long at 2,760mm. Having the exceedingly heavy battery placed here is also good for weight distribution and ride and handling. In fact, VW claims weight distribution is near equal at 50:50; so what you have in effect is the dynamic potential of a mid-engined car, albeit a heavy one. 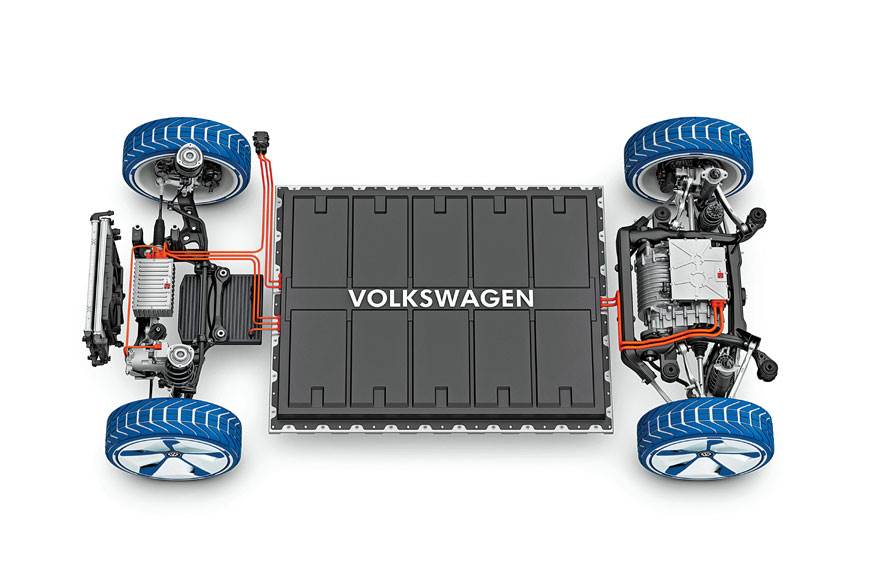 What’s also likely to help is the fact that the ID platform is rear-wheel drive. This has been done to improve traction in dynamic situations. The electric motor is so compact, it is integrated into the rear axle. Next to that is a one-speed gearbox and the power electronics. The latter converts the DC (Direct Current) voltage from the battery to AC (Alternating Current). The ID concept car showcased at the Paris motor show was powered by a 125kW or 170hp e-motor. This delivers a potential 0-100kph time of under 8sec, according to VW, and top speed of 160kph. Similar in construction to the 2018 e-Golf, this permanent magnet alternating current (AC) motor in standard-drive mode is capable of delivering 12,000 rpm. And what the ID could get is a more developed version of the motor seen on early prototypes of the car. VW could alternatively also opt for an induction motor. Invented by Nikola Tesla and used successfully on Tesla electric cars, this motor has no permanent magnet but induces current on the rotor to make it turn. Each type of motor has its benefits, but for pure electrics, the 3-Phase 4-Pole induction motor may just have the edge over the DC brushless motor.

What VW is clear about, however, is the battery. Placed under the floor and comprising of 10 individual cell modules, the MEB battery is scalable and very flexible. There will be three or more lithium-ion battery ‘sizes’. The entry-level ID hatchbacks will have a battery rated at 48kWh (kilowatt hour). This will result in a range of around 330km on the WLTP (Worldwide-harmonised Light vehicle Test Procedure). If all 10 of the modules of the frame (that looks like a chocolate box) are used, the battery can be scaled up to go as high as 62kwh with a 550km range; the latter, of course, being both heavier and more expensive. 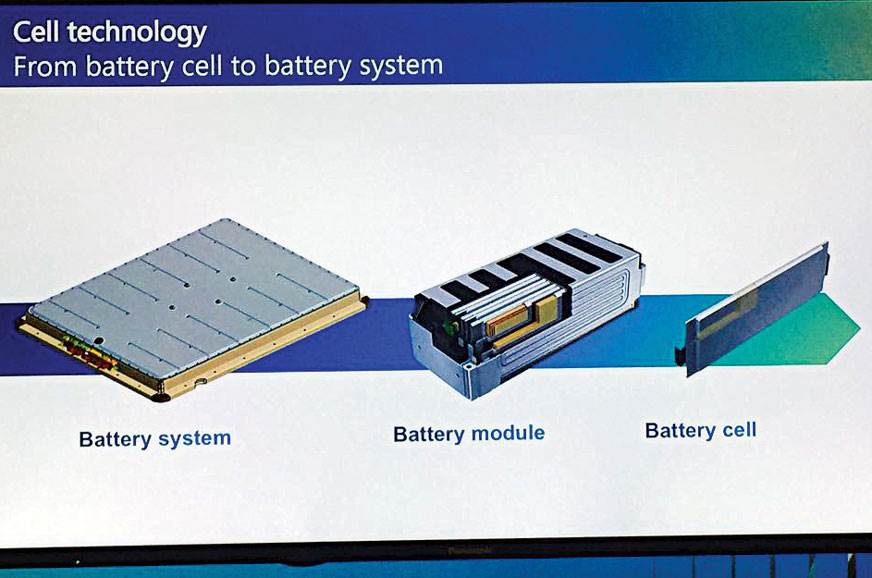 The MEB battery system is made up of 10 individual modules, each comprising of multiple battery cells.

VW’s battery system is also flexible – it can use both, pouch type or prismatic cells. The company’s current supplier is LG Chem, and the reason they use these types – as against the normal round or cylindrical ones (used by Tesla) – is because the pouch and prismatic types offer greater energy density. 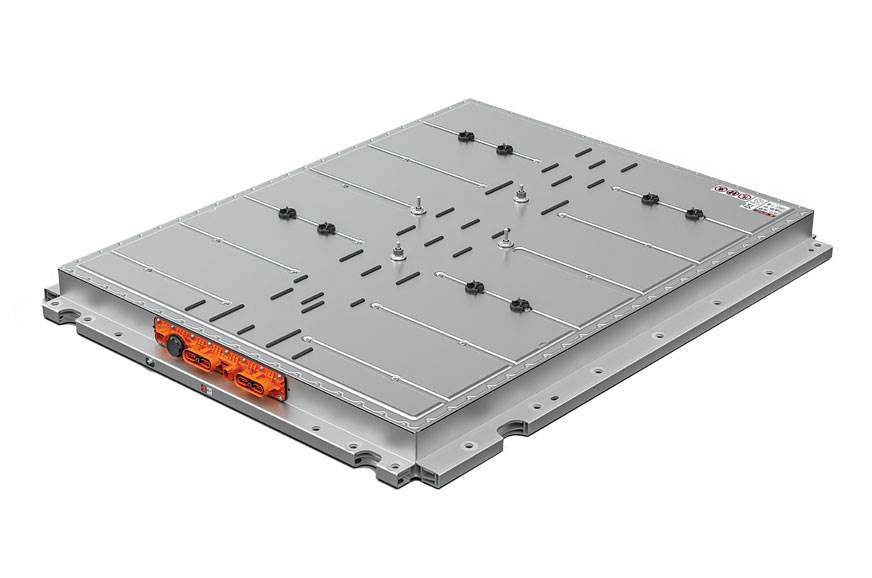 Each cell, irrespective of its type or manner of construction, consists of four key elements. The negative anode, made up of carbon or graphite; the porous polyolefin film, the separator; the positive cathode made of lithium metal oxide, and the liquid electrolyte that consists of conductive lithium salt. Yes, there is still electrolyte in every cell; the first solid-state batteries are unlikely to go on sale before 2025, whereafter both energy density and range will increase.

Importantly, what VW’s battery pack also has is a water-based climate control system that insulates the battery from variations in temperature (one of the main reasons for premature loss of battery life).

VW has also worked on making the ID easy to charge. At a basic level, it can be charged at 2.3kW off a 230V home supply, but Volkswagen will also sell its ‘Wallbox’ home charging system for around 300 Euro. Capable of charging the car ‘overnight’, the charging rate here is bumped up to 11kW. All IDs will also be equipped to accept fast or rapid DC charging, at 125kW; this will mean an 80 percent charge in just 30min. 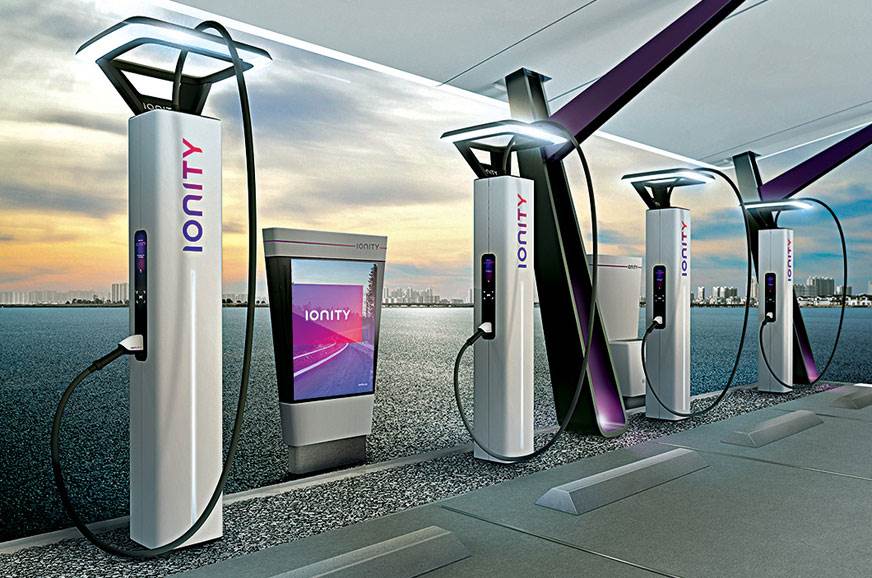 Ionity promises to provide green energy for its rapid chargers.

When it comes to software, there will be over-the-air updates for the car, and an all-new electric architecture called ‘VW iOS’, that will help integrate all manner of apps.

While some areas of the much-awaited MEB platform are still under wraps, the new platform, if things work out favourably, clearly has the potential to be a game changer. And that wouldn’t be a day too soon. The world finally seems ready to make the sacrifices electric cars of today demand. Things will only get better from here.

Volkswagen hit by another scandal