Only available with the diesel-automatic option, the Ameo GT Line gets the same design elements as the Polo and Vento GT Lines. 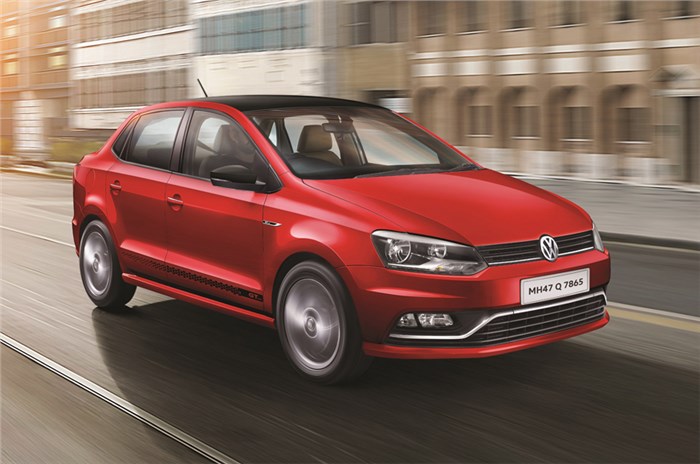 Following the launch of the refreshed Polo and Vento, which introduced the GT Line trim to the brand’s India line-up, Volkswagen has now launched the Ameo GT Line at Rs 9.99 lakh (ex-showroom, pan-India). We reported the upcoming launch of this new variant just a week ago.

Only available with the 110hp, 1.5-litre diesel and 7-speed dual-clutch automatic engine-gearbox combination, the Ameo GT Line gets the same design elements seen on the GT Line versions of its hatchback and midsize sedan sibling – it features a GT Line badge on the fender, along with blacked-out wing-mirror caps, roof and spoiler. The VW Ameo GT Line also gets the new Sunset Red paint shade available with the Polo and Vento GT Line. However, unlike the Polo and Vento, the Ameo has not been given the new-design grille and bumper.

As the Ameo GT Line is based on the top-spec diesel-automatic variant – the Highline Plus – it shares the same level of equipment, costs the same amount and also comes with the Volkswagen Connect suite. Volkswagen has made this connectivity tech standard fitment on the Ameo Highline Plus variants too. Like VW’s other diesel models, all variants of the Ameo diesel now come with a 5-year warranty as standard; the petrol variants come with the brand’s four-year/one lakh kilometre warranty pack, which includes four years of free road-side assistance and three free services (in one year or up to 15,000km).

The Volkswagen Ameo has been soldiering on, more or less unchanged, since it first launched. Compared to much newer compact sedan rivals, like the the Maruti Suzuki Dzire, Ford Aspire and Honda Amaze, the car has begun to feel its age despite being a well-built model that boasts great high-speed manners.

It remains to be seen if this new variant will help Volkswagen retail more units of the Ameo during the festive season.