Based on our real world tests, here’s a look at fuel efficiency figures of the Toyota Glanza manual and automatic.

The Maruti Baleno-based Toyota Glanza has undergone a major refresh for 2022. Like its Maruti twin, the Glanza gets a new K12N 1.2-litre petrol engine that makes 90hp and 113Nm of torque and replaces the K12B and K12C units. And while it retains its 5-speed manual gearbox, a new 5-speed automated manual transmission (AMT) replaces the continuously variable transmission (CVT) that the outgoing model was available with. The manual’s ARAI fuel economy figure is 22.35kpl, which is more than the K12B’s 21.01kpl but lesser than the K12C’s 23.87kpl, whereas the AMT’s claimed fuel efficiency is up 17 percent, from 19.56kpl (K12B engine with CVT) to 22.94kpl (AMT). But are they as efficient in the real world? We put them through our test cycles to find out.

What is the real world fuel efficiency of the Toyota Glanza?

The 5-speed manual iteration of the Toyota Glanza achieved 13.80kpl and 17.50kpl in our city and highway cycles, respectively, whereas the 5-speed automated manual transmission (AMT) achieved 11.86kpl and 17.21kpl. Both these variants are equipped with the engine stop-start feature, which keeps a check on fuel consumption while the vehicle is idling. 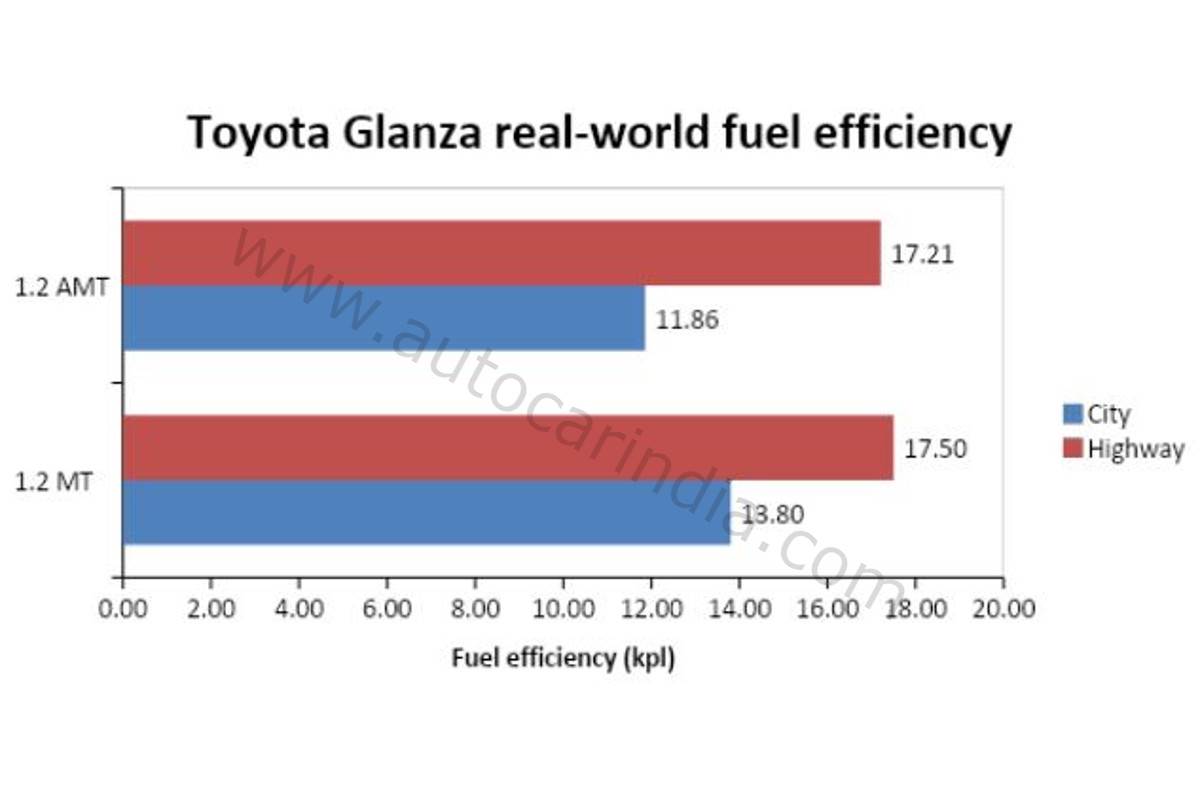 The Toyota Glanza’s new 90hp, 1.2-litre petrol engine with the manual transmission has well-judged gear ratios and thus feels adequately responsive. It doesn’t warrant heavier accelerator inputs to keep up with the pace of traffic. The AMT, on the other hand, is programmed to upshift to the highest gear at the earliest opportunity, in the interest of efficiency, which invariably requires heavier throttle inputs to regain momentum when the vehicle speed drops; thus taking a toll on the AMT’s efficiency. What’s interesting is that the engine stop-start feature will keep the engine turned off at a traffic light even if the cabin temperature rises higher than the preset climate control temperature; it’ll only restart the engine when you depress the clutch pedal in the manual or ease off the brake pedal in the AMT. Prolonged periods with the engine and air-con compressor off certainly aid efficiency, unlike in most other cars where the climate control senses a rise in the cabin temperature and restarts the engine. At 100kph, both these variants sip fuel conservatively, with the tachometer needle hovering around the 2,600rpm mark in fifth gear.

Before our real-world fuel efficiency test, we fill the tanks of our test cars to the brim and maintain tyre pressures based on the manufacturer’s recommendation. These cars are driven in fixed city and highway loops and we maintain certain average speeds. Throughout our test, there is only one person in each car, running the air-con and other electrical like the audio system, indicators and wipers when required, just like how a regular user would. Periodic driver swaps further neutralise variations in driver patterns. At the end of each cycle, we calculate efficiency by tanking them up till the brim. We take pride in our testing data, which isn’t merely consistent, but also gives users an accurate indication of what they can expect in the real world.

Petrol, diesel prices drop by as much as Rs 9.5

I have 2021 model GLANZA MT. I am getting a mileage of 22km/lit in highways and 18km/lit in cities. How your tested mileage is less?

I have 2021 model GLANZA MT. I am getting a mileage of 22km/lit in highways and 18km/lit in cities. How your tested mileage is less?