Touchscreens are not the future, voice is: Tata Motors design chief

Despite being a future-looking concept, the Tata Avinya has very small screens, and none are dominating the cabin. 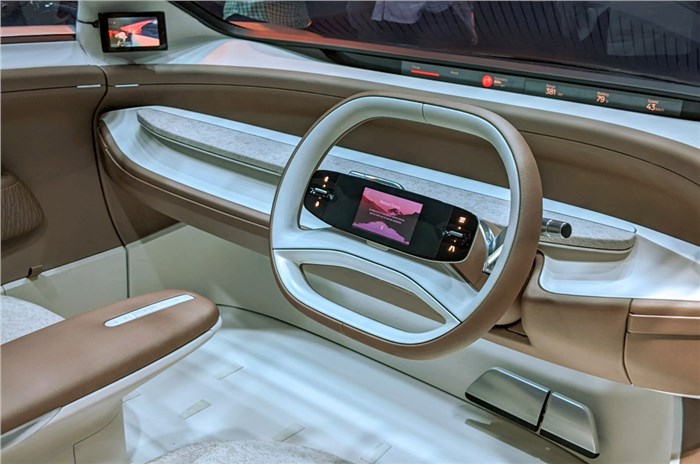 Of the Tata Avinya concept’s many interesting traits, one stands out as being particularly radical – the lack of touchscreens. Indeed, bucking the trend of larger, wider and all-encompassing touchscreens, the Avinya has instead tiny screens around the cabin and none of them the focal point of the interior.

This is far from some oversight, rather, as Martin Uhlarik, head of Global Design at Tata Motors, says, it’s an ‘intentionally bold choice’ and a vision of what the company believes will be the future of interior automotive design.

“It’s a screen arms race today, where will it end? Plus, if you look at human centric design, we are looking at so many screens in our lives and it’s not necessarily a good experience, you need the info, of course, but we want to provide it in a way that isn’t overbearing,” says Uhlarik.

Thus, there are screens and displays around the cabin, but placed at specific locations and for specific functions, for example, the ones on the doors for rear view, one on the steering wheel for car set-up functions, an HUD for critical driving info and a neat and very slim screen tucked away at the base of the windshield for other less important information.

It’s a bold approach; born EV cars like the Teslas have laptop-sized screens as the primary interface in a minimalistic cabin. Even models like the Kia Seltos and Mahindra XUV700 boast of wide double panel screens that stretch halfway across the width of the dashboard and today’s consumers are lapping it all up.

However, Uhlarik believes consumer behavior will change very soon, illustrating using his own family. “I’m a button guy, my son who is 20 is a touchscreen guy and my daughter who is 13 is almost always using voice commands to operate her phone.”

That, in essence, is what Uhlarik and his team believe will form the basis of future human-car interaction and the Avinya is all geared up for this. At the front is a sound bar that stretches across the minimalistic dashboard and each seat also has speakers built into the headrest area. There are also multiple microphones around the cabin to pickup and recognise occupants' voices. Thus, with a multiple mic and speaker set-up, the car can provide a focused and accurate audio interaction with each of its occupants.

While this may seem radical to some, it isn’t as far out as you’d imagine. Yes, touchscreens are certainly a logical and very familiar interface, but, as Uhlarik puts it, “That’s today, in future, voice will play a much larger role. If you look, voice interfaces are growing all around us and the technology is rapidly improving.”

As familiarity with digital assistants grows and their own capability improves and becomes more intuitive and natural, human-machine voice interactions will only advance. Carmakers are clearly aware of this and many are integrating voice commands and even popular digital assistants like Google and Alexa onboard.

As of now though, these form supplementary functions in what is pretty much a touchscreen-centric environment. By going voice-first, Tata Motors is clearly trying to lead the change in what it believes will be the future and the Indian carmaker certainly has a good track record of looking ahead.

For instance, while others still believe the EV market to be not ready for mass adoption, Tata Motors bet otherwise and rushed affordable electric vehicles that are hot sellers today.

In any case, the production version of Tata’s gen 3 EV is still three years out – a lifetime in the tech world – by then ‘voice’ could easily be the new ‘touch’ and with that playing out, Tata Motors’ bold vision could pay off big time.