PV segment, as a whole, will likely close FY2019 in the low single digits; Tata Tiago nudges Celerio out to close the top 10. 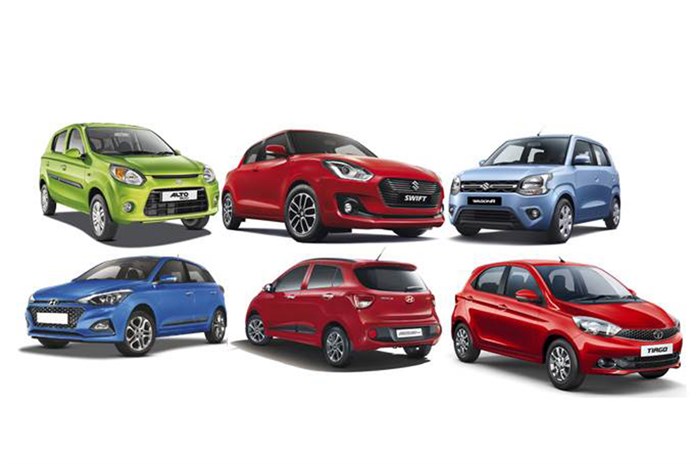 Weak market sentiment continues to impact the auto industry in the country. The Indian automobile industry is doing everything possible to overcome this slowdown, which has hit it hard over the past six months. Right now, the passenger vehicle segment is set to close FY2019 in the low single digits.

A sudden rise in insurance prices with higher interest rates on loans had an impact on customer purchase decisions for the most part of CY2018. The upcoming general elections – slated for May – have also kept consumers from making any discretionary purchases right now.

As the industry still struggles to moderate inventories, February 2019 sales remained subdued with PV sales declining 1.11 percent to 2,72,284 units (February 2018: 2,75,357). Apex industry body SIAM expects the scenario to improve only after the elections.

Meanwhile, here’s a look at the top 10 bestselling PVs in February 2019:

The Maruti Suzuki Alto, the quintessential go-to car in the entry-level hatchback segment has emerged as the top performer once more in February, selling 24,751 units. The car sold 19,760 units in the same month last year, thus marking sizeable gains in recent times.

In second place, the Maruti Suzuki Swift has gained one position over last year's numbers with a sale of 18,224 units (February 2018: 17,291). The Swift, in its latest avatar, has wooed buyers with all its enhanced practicality in an appealing package. It helps that the car also offers the convenience of automated manual gearboxes in both its petrol and diesel variants.

The Swift's premium hatchback sibling, the Maruti Suzuki Baleno, has been retailed through the company's Nexa network. The car also rose one spot to secure the No. 3 position on this list. The car went home to 17,944 buyers (February 2018: 15,807) and after being sprucing-up its aesthetics and feature enhancements in the recent facelift in January, the Baleno is making it difficult for anyone to look away when it comes to having a large dose of style, comfort and safety features at an irresistible price point.

Maruti Suzuki's winning spree continues at the No. 4 spot as well, with the Dzire. However, the popular compact sedan has slumped three positions since last year. Where it had once clocked 20,941 units in February 2018 as the top performer, the Dzire garnered volumes of 15,915 units last month, still averaging better than most of its competitors in the market.

The No. 5 position remains secure with the ever-popular Maruti Suzuki Wagon R. The car sold 15,661 units in the month (February 2018: 14,029). The latest third-generation tall-boy hatchback has grown in dimensions by being built on a completely new platform and thus, offers exceptional space on the inside. The car has also evolved in terms of safety, with dual airbags, ABS with EBD and parking sensors fitted across the range, as standard.

With a vehicle in almost every popular segment, Maruti has its hands full when it comes to the UV space, too. India's bestselling UV, the Maruti Suzuki Vitara Brezza jumps one spot to No. 6, selling 11,613 units. Even though sales remained almost flat (February 2018: 11,620), it moved up one spot in the tabulation.

At No. 7, Hyundai's i20 drops one spot, clocking an overall dispatch of 11,547 units (February 2018: 13,378). The car is direct competition to the Baleno; and Maruti's relatively better-grade line-up could be the reason behind this sales slowdown.

The Hyundai Creta continues to be the king of its segment and has risen by one position on this list to total incremental sales of 10,206 units (February 2018: 9,278). A favourite among SUV buyers, the Creta becomes even more popular after Hyundai's new top-of-the-line variant with segment-first updates like ventilated seats. In less than four years since launch in 2015, this past February also marked a milestone for the crossover, after it crossed the 5,00,000-unit mark across domestic sales and exports from India.

The Hyundai Grand i10 – the Korean carmaker’s B-segment hatchback – drops one position on the bestseller list, shifting to No. 9 with a sale of 9,065 units in February 2019 (February 2018: 10,198). The car is expected to receive a generational change this year, in around July.

The Tata Tiago makes a comeback to the Top 10 chart after being off it for 14 months. Taking the spot on the roster occupied by the Maruti Suzuki Celerio last month, the Tiago closes the Top 10 list with statistics that hint at an overall sales figure of 8,286 units in the month. The car has been responsible for Tata's recovery in the PV space, where it now has the feat of achieving 2,00,000 units, which also came up in February.

With just two weeks to go to close the fiscal year, both OEMs and dealers would want to clear the maximum backlog of inventories within FY2019, and start the next assessment year on a fresh (and brighter) note.

Industry experts say that a number of corrective measures are already being taken on the fronts of liquidity and carrying costs, which would bear fruit in the coming months. Even though gearing up for BS-VI and enhancing vehicular safety are two even greater challenges up ahead, one hopes that the Indian automotive industry will rise through these trying times before sliding into the fast lane, once again.