Dual-tone paint schemes are now available with the top-end Tata Harrier XZ, at a premium of Rs 20,000. 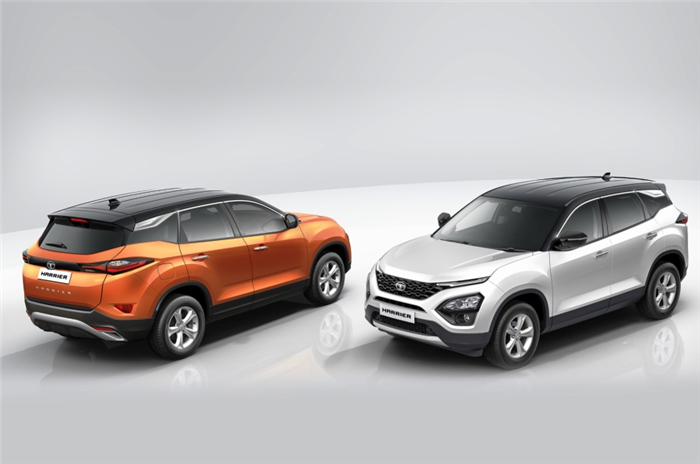 If there’s one SUV that has dominated headlines of late, it’s the MG Hector. Not only is it packing a lengthy list of features, but also a super-competitive price tag. And almost immediately, Tata Motors has swung into action to counter the Hector wave. The Tata Harrier Dual Tone has been launched in India, at a price of Rs 16.76 lakh (ex-showroom, Delhi). This pegs the Tata Harrier closer to the top-spec MG Hector Sharp diesel, which is priced at Rs 16.88 lakh.

Available only with the top-spec XZ trim, the Tata Harrier Dual Tone costs Rs 20,000 more than the standard mono-tone versions. There are two dual-tone options to choose from – Calisto Copper with a black roof, and Orcus White with a black roof. So far, the Harrier could be accessorised with official roof decals, though full-length roof wraps were offered as dealer-level fitments. The Harrier continues to be available in the existing mono-tone paint schemes, namely Calisto Copper, Ariel Silver, Thermisto Gold, Telesto Grey and Orcus White, the last of which is the only colour available on the base XE trim.

While this is only a visual update, the Harrier is set to get crucial mechanical changes in the time to come. First up will be the upgrade to a BS6-compliant version of the 2.0-litre Kryotec diesel engine, which will also be more powerful, producing around 170hp. A Hyundai-sourced 6-speed torque converter automatic gearbox will be available in due course, and a 1.6-litre turbo-petrol version is in development. Also in the pipeline is the larger seven-seat version of the Harrier, revealed as the Buzzard at the 2019 Geneva motor show, which will counter the seven-seat MG Hector that’s due for launch next year.

Think the dual-tone Tata Harrier looks better than the mono-tone version? Let us know in the comments.