All-black Tata Harrier likely to be called Harrier Dark edition upon launch which is slated to take place soon. 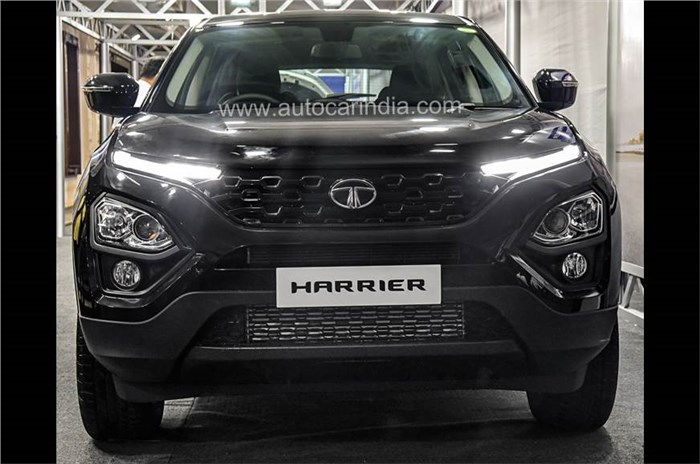 According to dealer sources, the all-black Harrier will be called the Harrier Dark edition. The SUV will come with a unique Atlas Black exterior paint shade with 17-inch "Blackstone" alloy wheels, and all black front and rear skid plates. It will also get grey headlamp inserts.

On the inside, the all-black theme would continue with an all-new "Blackstone" dashboard shade. The centre console will feature matte grey inserts instead of the faux wood trim on the standard car. The model will also get premium Benecke-Kaliko Blackstone leather seats and door pads with contrast grey stitching along with perforated leather inside door handles.

These changes aside, the all-black Harrier remains identical to the standard model. The Harrier Dark Edition is likely to be priced slightly higher than the standard model, however it remains to be seen whether it is positioned above or below the recently-launched Harrier dual tone variant. While the upcoming Harrier Dark edition can be considered as a stop-gap update to keep things fresh in order to take on newer competition like the MG Hector and the Kia Seltos (launching on August 22,2019), the Harrier will see more updates down the line that include a new variant with a factory sunroof as well.

Additionally, the SUV will see a power upgrade too, thanks to a 170hp BS6 compliant engine. What's more, Tata Motors will also introduce a six-speed automatic equipped variant for the Harrier along with a three row seven-seat version, previously showcased as the "Buzzard" at the Geneva Motor show 2019. Along with the Harrier Dark edition, Tata Motors is also gearing up for a market launch of the new Altroz premium hatchback that will take place during the festive season this year.