Tata’s i20 and Baleno rival will come with three engine options; to launch by August 2019. 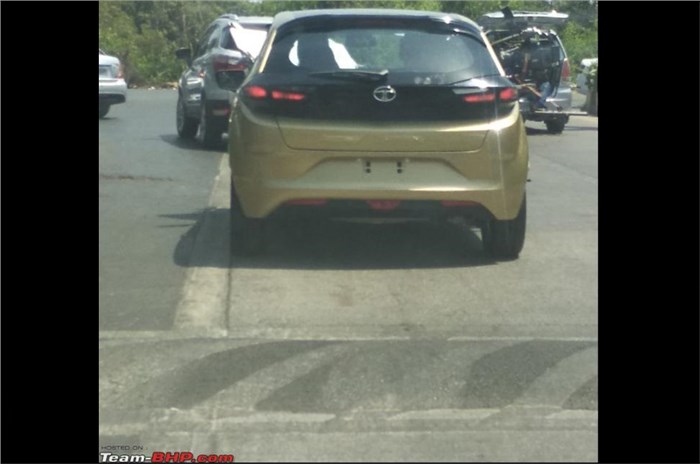 It was earlier this year – at the 2019 Geneva motor show – where Tata Motors unveiled the Altroz, the production version of the 45X concept revealed at the 2018 Auto Expo. More recently, the Altroz was seen in India for the first time, with a spy shot giving us a glimpse of the production model’s face.

Now, new Tata Altroz images have emerged online, revealing the production-spec model’s rear-end. As was the case with the example spotted in April, this one, too, seems to be identical to the car shown at Geneva in terms of design, retaining the blacked-out boot lid and black surrounds for the tail-lamps. Another thing to note is the Altroz in these pictures sports single-tone alloy wheels instead of the 17-inch, dual-tone wheels seen on the show car.

The Tata Altroz’s interior will likely get a largest-in-its-class touchscreen infotainment system, a part-digital instrument cluster, and a T-shaped centre console with AC vents under the centre screen. As per details revealed by Tata Motors, cars on Impact Design 2.0 will use varied colour combinations and high-quality materials to “enhance the perception of tactile quality.” There will also be room for personalisation with multiple accessory options, along with several in-cabin storage spaces.

The Altroz sits on Tata’s new ALFA platform, and will be offered with a choice of three engine options - two petrols and one diesel engine. The petrol engines in question will be turbocharged and non-turbocharged iterations of Tata’s 1.2-litre, three-cylinder petrol motor. The naturally aspirated unit is shared with the Tiago but will feature a balancer shaft that’ll keep NVH levels low.

The 1.2-litre turbo-petrol will be borrowed from the Nexon, but in the Altroz, it will make slightly less power - 102hp and 140Nm of torque, which is a fair bit less compared to the 110hp and 170Nm it makes in the Nexon. Tata hasn’t officially confirmed a diesel engine option for the Altroz but it’s definitely coming, and company sources have indicated it will be a detuned version of the Nexon’s 1.5-litre motor and will develop 90hp.

The Tata Altroz’s India launch is set to take place in August 2019, and it will take on the likes of the Maruti Suzuki Baleno, Hyundai Elite i20, Honda Jazz and Toyota Glanza.

What about the Tata Altroz excites you the most? Let us know in the comments.