New spy picture provides a clear look at the front end of Tata's upcoming Baleno and i20 rival, which is due for launch next year. 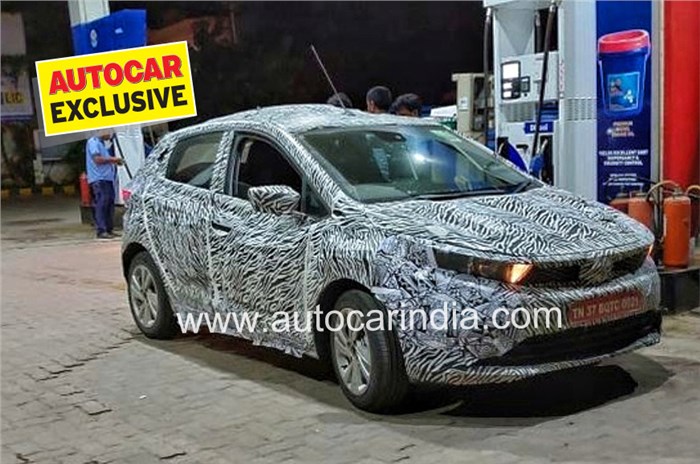 Even as Tata continues to ride the tidal wave of enthusiasm generated by the reveal of the Harrier SUV, it is also working on getting its other Auto Expo stunner - the 45X hatchback - to life. We can now confirm the production-spec 45X will be launched in August 2019, and a new spy picture sheds light on the production version's front-end, revealing some interesting details.

Seen in final form for the first time, the production-spec 45X hatchback's face is - as is the case with the Harrier - identical to that of the concept. It’ll be the second Tata to sport the brand’s new Impact Design 2.0 language, and in what Tata describes as the ‘humanity line’, the inset grille stretches to merge with the large headlight units and form a single design element. Also visible in this new spy shot are the angular elements that are part of the front bumper, the upswept window line, the prominent shoulder line that originates from the front door and runs all the way back to the tail-light and the chunky four-spoke alloy wheels. Tata Motors has promised all cars following the Impact Design 2.0 philosophy will get class-leading wheel sizes, generous wheel arches and clean surfacing, and the production-spec 45X seems to tick all those boxes.

Spotted previously, the interior of the production-spec 45X will likely get a largest-in-its-class touchscreen infotainment system, analogue dials, and a T-shaped centre console with AC vents under the centre screen. As per details revealed by Tata Motors, cars on Impact Design 2.0 will use varied colour combinations and high-quality materials to “enhance the perception of tactile quality.” There will also be room for personalisation with multiple accessory options, along with several in-cabin storage spaces.

Details on engines being offered on this new hatchback are scarce but it would be safe to expect more powerful versions of the 1.2-litre petrol and 1.5-litre diesel powerplants currently on offer on the Nexon. Gearbox duties are expected to be taken care of by a six-speed manual, there is also a twin-clutch gearbox in development. The 45X hatchback has also previously been spied undergoing tests at the Kari Motor Speedway race track, likely to fine-tune suspension settings and dynamic traits.

When it is launched in August 2019, the Tata 45X will go up against the Maruti Suzuki Baleno, Hyundai i20 and Honda Jazz.

What do you think would be a competitive price tag for the Tata 45X? Let us know in the comments.