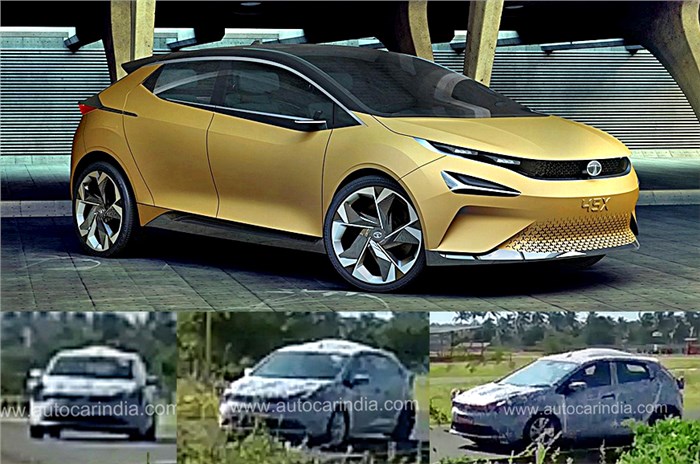 A few weeks after the Tata Harrier SUV was caught undergoing high-speed testing at the Kari Motor Speedway, the 45X hatchback has been spied undergoing the same exercise at the race track. The tests are likely to fine-tune suspension settings and dynamic traits of the upcoming Tata hatchback. Tata’s Tiago JTP and Tigor JTP models are also said to have been put through their paces on the track lately.

The 45X is a large hatchback that will be Tata’s answer to the Hyundai i20, Maruti Suzuki Baleno and Honda Jazz when it goes on sale, likely in the second half of 2019. The model was first shown in concept form earlier this year, at the 2018 Auto Expo. Tata's new Impact Design 2.0 styling language has been used on this new hatchback; and all spy images so far have revealed a well-balanced and confident shape. The production car is expected to boast class-leading wheel sizes, generous wheel arches and clean surfacing.

On the inside, the 45X is expected to be roomy and practical, traits that Tata says all cars built to Impact Design 2.0 will have. Our exclusive spy shot of the car’s cabin also tell us that the 45X will come with a free-standing touchscreen infotainment screen which also doubles-up as a display for the reverse camera. An important point to note is the larger-than-average size of the screen which could be segment-leading when launched. The car will come with analogue dials and a traditional T-shaped centre console. The AC vents will sport a simple rectangular design and will sit below the infotainment screen, similar to the setup seen on the upcoming Harrier SUV.

As per details revealed by Tata Motors, cars on Impact Design 2.0 will use a variety of colour combinations and high-quality materials to “enhance the perception of tactile quality.” Additionally, the car is also expected to come with multiple personalisation and accessory options.

There isn't much known about what engines would power Tata's upcoming i20 rival. We expected more powerful versions of the 1.5-litre diesel and the 1.2-litre petrol motors currently doing duty under the hood of the popular Tata Nexon SUV. As far as transmission goes, there will be a 6-speed manual and a new twin-clutch gearbox, which is currently under development.