We list some of our favourite models that are being showcased at the ongoing motor show in Geneva. 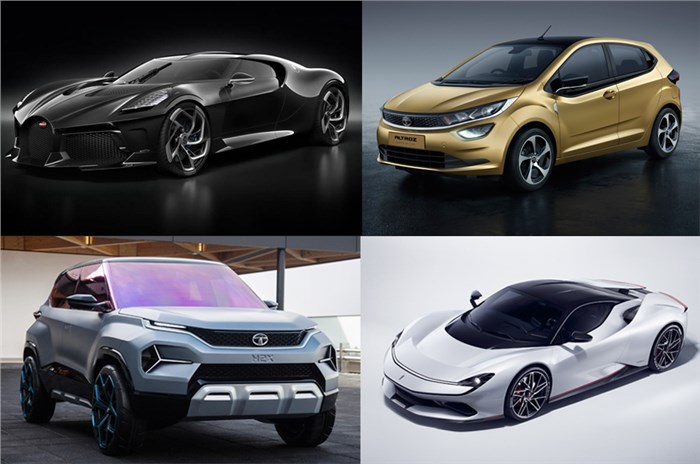 From outlandish concepts to production ready models to hypercars with eye-watering price tags, the 2019 Geneva motor show played host to them all. The show played host to the world’s most expensive new car, the one-off Bugatti La Voiture Noire to more down to earth SUVs and hatchbacks such as Skoda’s new entry-level Kamiq and the all-new Tata Altroz.

Here is a look at some of the important cars from the show: 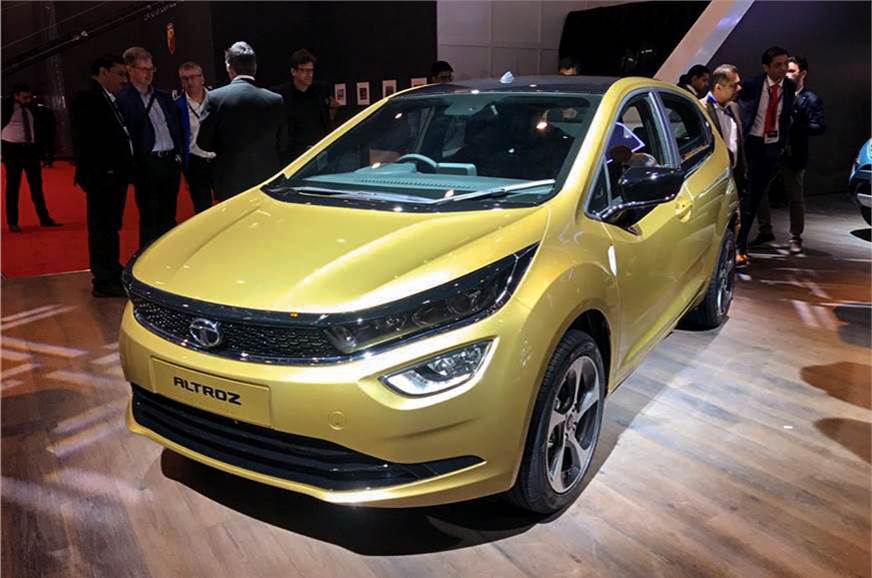 The production version of the 45X hatchback concept from 2018, the Altroz, will be Tata’s entry into the premium hatchback segment. Featuring the carmaker’s Impact Design 2.0 design philosophy, the Altroz follows the 45X closely on design, with the grille that flowing into wrap-around headlamps, prominent body lines and a sleek profile. Inside, the dashboard follows a multi-layered theme, with a freestanding touchscreen atop the centre console. A part-digital instrument cluster and a chunky multi-function steering wheel are other interesting details in the cabin. For the Indian market, the Altoz will be offered with a 1.2-litre petrol motor in turbocharged and non-turbocharged forms, alongside a 1.5-litre diesel motor. The car is expected to go on sale in India in the second-half of the year. 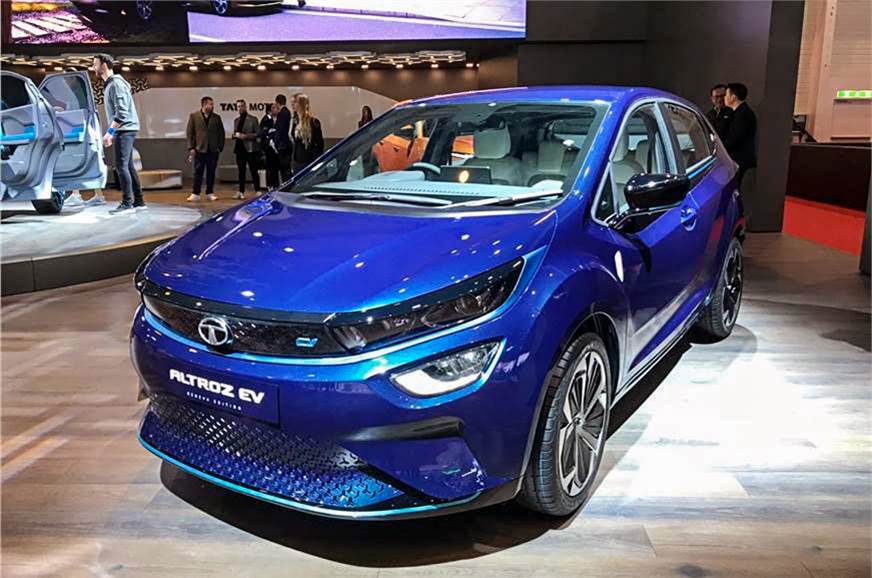 Alongside the standard Altroz hatchback, Tata also revealed its EV sibling that is expected to also go into production in the next two years. Compared to the standard hatchback, the EV features a few cosmetic changes, such as on the bumpers and wheels, along with a Jaguar-like rotary control for the gearbox inside the cabin. Tata has said that the car will have a range of 250-300km on a single charge and will get fast-charge capability, which will see it reach 80 percent charge in one hour. 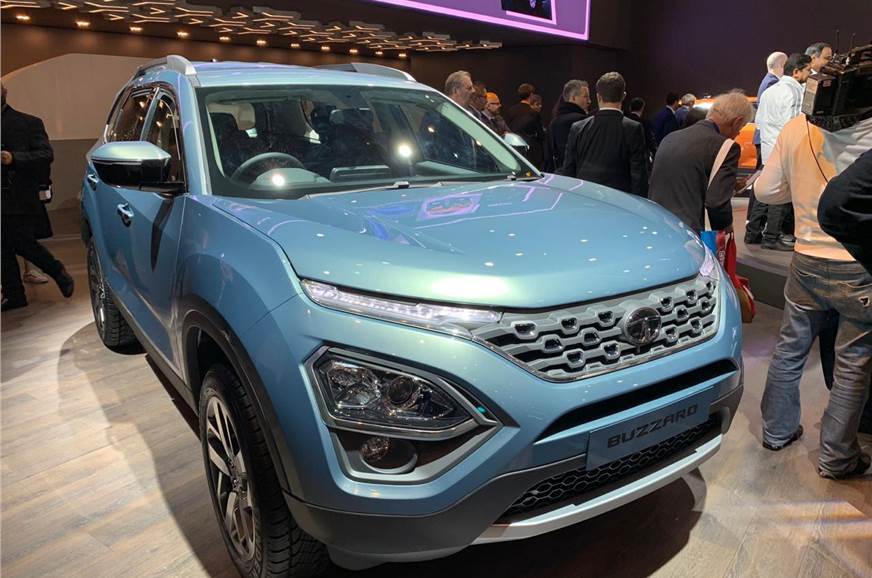 The much awaited seven-seat derivative of the Harrier, the Buzzard, made its public debut on the international stage. Compared to the Harrier, the Buzzard stands 63mm longer, owing to a larger rear overhang, along with featuring structural and cosmetic changes to the rear to accommodate a third row of seats. Expected to arrive later this year, the SUV will be powered by the 2.0-litre diesel from the Harrier, but in a higher state of tune, and will also get an automatic gearbox option. Keep in mind though that the Buzzard name is only a working title, with the production SUV getting a different name. 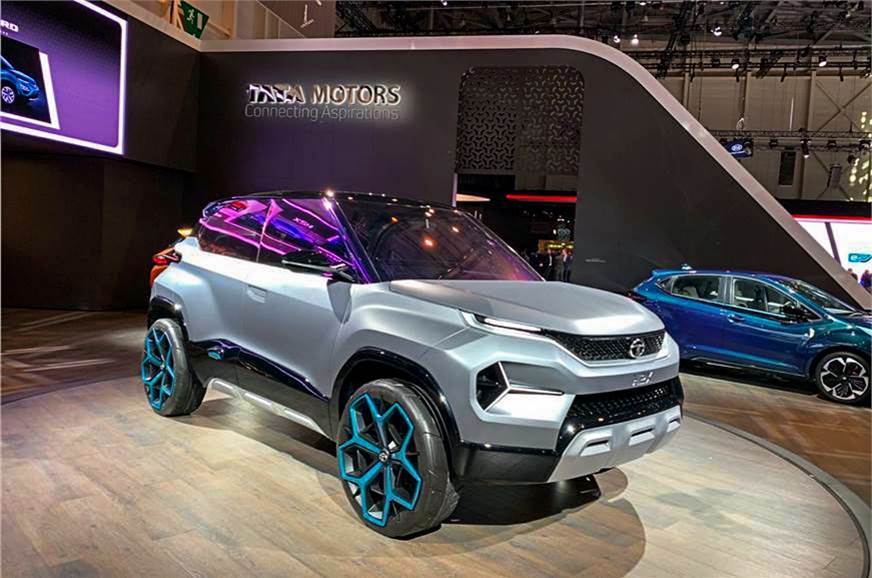 The star of the show at Tata’s stall was the H2X concept that previews a micro-SUV for the Indian market. It features styling cues seen on the Harrier and gets the two-part headlight treatment with high-set LED DRLs sitting above the main headlamp unit. The concept features an upright stance with prominent creases, chunky skid-plates at the front and rear, and a glass roof. Inside, the cabin features two 10.2-inch displays for the instrument cluster and infotainment system, along with rather interesting air con vents on the dashboard and the front seat backs that use technology similar to Dyson’s bladeless fans to circulate cool air around the cabin. The production H2X is likely to debut next year with styling expected to remain in line with the concept, though much more toned down. 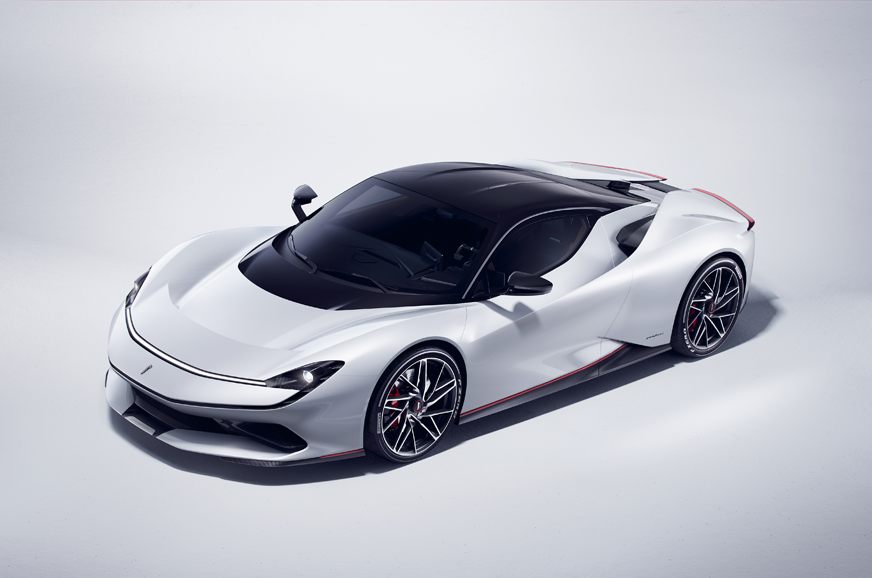 Mahindra-owned Pininfarina debuted its eye-catching hypercar, the Battista, at Geneva. The first-ever Pininfarina-badged car features a simple yet elegant design, with swooping lines and stylistic elements combining form with functionality. The cabin features a driver-centric design and has three displays surrounding the steering – one controlling the vehicles dynamics, one to control the in-car functions and the third displaying driving data.

Powering the hypercar is an all-electric powertrain featuring an electric motor at each wheel, giving the hypercar a total output of 1,900hp and 2,300Nm of torque and a claimed 0-100kph time of under 2sec. The hypercar will provide a range of 450km. Pininfarina only plans to build 150 Battistas, with each costing around $2 million (Rs 14 crore, approximately). 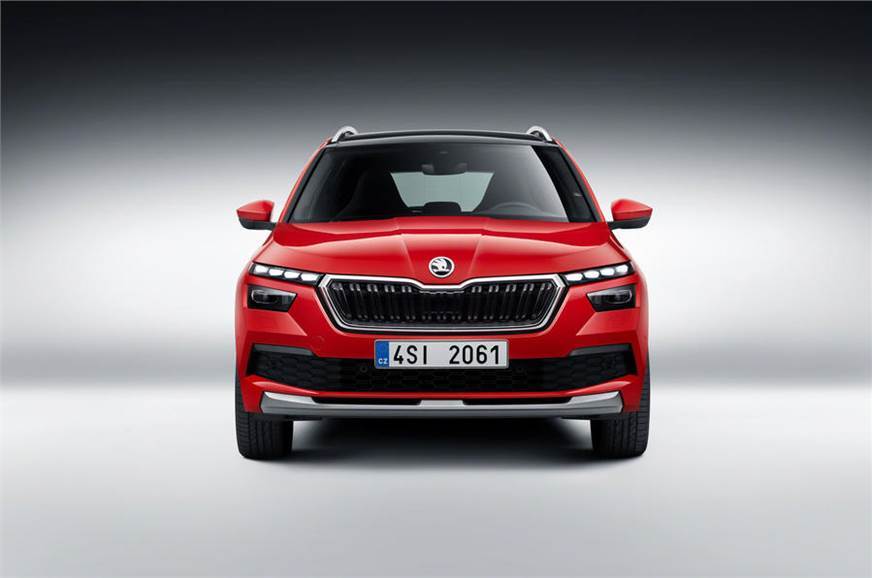 Skoda’s smallest SUV, the Kamiq, is its new entry-level SUV that sits below the larger Karoq in the brand’s international line-up. Underpinned by the VW Group’s MQB A0 platform, the Kamiq follows Skoda’s latest design philosophy seen in its SUV family, with a split-headlamp setup, upright grille, prominent body lines and a clean rear design. Under the hood, the SUV features a range of turbocharged petrol and diesel engines, paired with a choice of manual or automatic gearboxes. The Kamiq also previews a future SUV for India from Skoda that will be based on an India-specific iteration of the MQB platform. 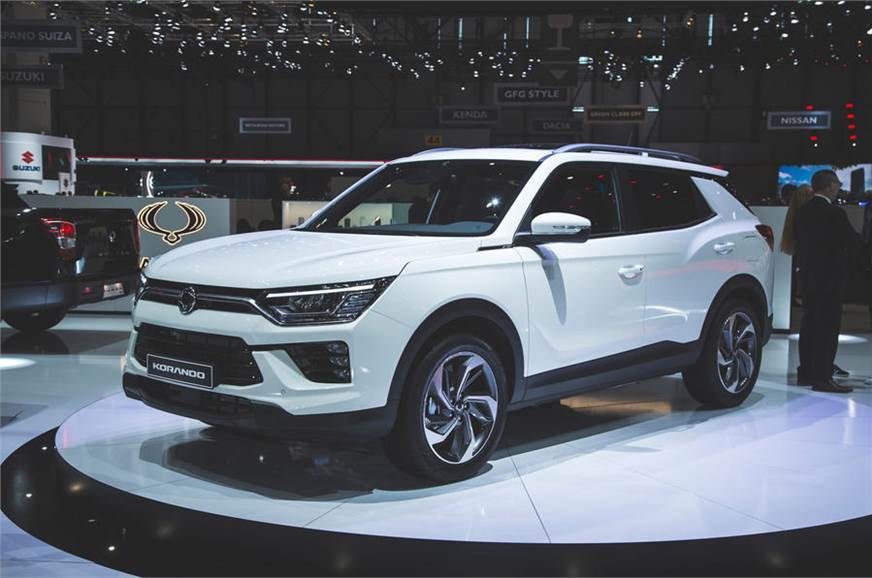 Another Mahindra-owned brand to debut a model at Geneva was SsangYong with its Korando SUV. Sitting between the Tivoli and the Rexton, the new Korando borrows styling details from its siblings and gets an upright stance, prominent haunches, narrow grille, prominent creases and an angular C-pillar. Inside, the new-gen SUV follows a cleaner, clutter-free dashboard design, with a large central touchscreen and a digital instrument cluster that minimises the use of buttons. Under the hood, the SUV is offered with that a choice of a 1.5 turbo-petrol or a 1.6 diesel engine. 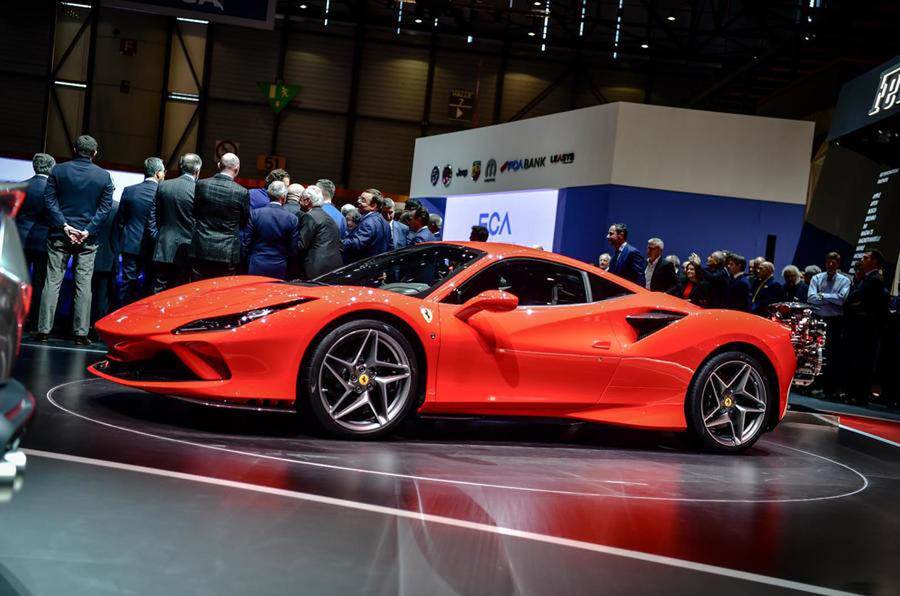 The replacement for the 488, the F8 Tributo, seemingly follows an evolutionary design over the former, along with borrowing stylistic elements from the 488 Pista. Under the hood is an uprated iteration of the brand’s 3.9-litre V8 from the 488 and develops 720hp and 770Nm of torque (50hp and 10Nm jump over the 488). The added power and 40kg weight savings on the Tributo shows in its performance. Ferrari claims a 0-100kph time of 2.9sec (down by 0.1sec) and a top speed of 340kph. 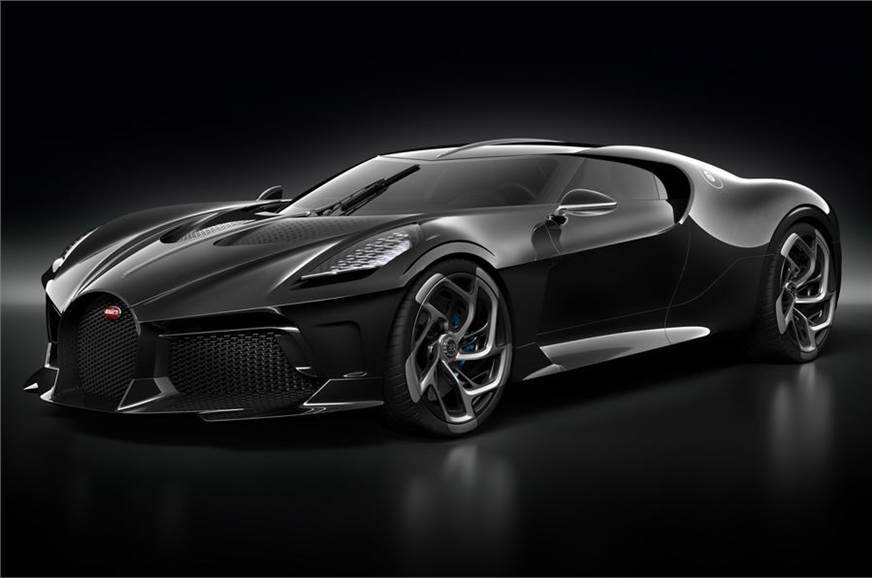 What you see here is the world’s most expensive new car – the La Voiture Noire. It is a one-off creation from the French company, made as homage to the iconic Type 57 SC Atlantic. The La Voiture Noire sports aggressive styling, with a more pronounced grille than either the Veyron or the Chiron, while the headlights recede back above the wheel arches rather than being placed horizontally above the bumper. The most definitive styling element though is the dorsal seam running up along the bonnet, between the windows and over the roof of the body (borrowed from the Type 57). At the rear, a continuous rear light runs along a grille-like back end, with Bugatti stencilled out below. All this sits above a bespoke exhaust setup comprising six separate pipes running away from the car's 1,500hp, 8.0-litre 16-cylinder engine. Price? €11 million (about Rs 88 crore), though it won’t matter as the car already has an owner.