Renault’s all-new 7-seat vehicle will be launched in the coming months. Here are a few things you need to know about the upcoming Triber. 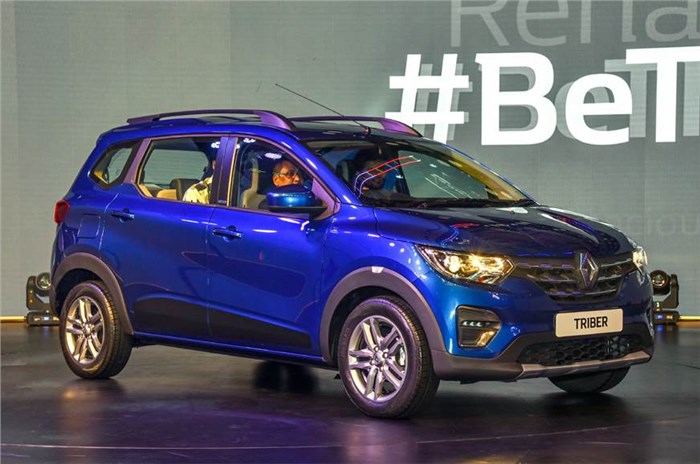 The Renault Triber made its global debut in Delhi on June 19, 2019. Being Renault’s first all-new product for India in nearly two years, the Triber is a highly anticipated model and will be in dealerships in the coming months. What makes it special? We’ve broken down all the information into five main points.

It’s under 4m in length

The Triber measures 3,990mm in length, 1,739mm in width and 1,643mm in height, so it’s a fairly substantial car even among sub-four-metre models. The Triber’s 2,636mm wheelbase is also amongst the largest in cars of this size. See one in the metal and you’ll know this is a vehicle that’s been designed inside out. The short bonnet has allowed for a large cabin section, the stepped roof promises ample headroom and even the tailgate extends low for easy loading/unloading.

The Triber has a very international look about it and the projector headlights, LED DRLs and a faux scuff plate at the front give it a pleasant face. Renault has also done plenty to add some personality to the look with cladding around the wheel arches, roof rails (with a load capacity of 50kg) and a kink in the C-pillar that helps break-up the van-like window line. Wrap around taillights and a faux rear skid plate are other things you’ll see on the Triber. Helping the Triber’s stance is its 182mm ground clearance.

The Triber is surprisingly spacious on the inside, with its trump card being seating for seven. Sure, the third row isn’t roomy but it is useable for short stints and adds versatility to the package. With all seats in place, luggage room is all of 84 litres. However, the rear-most seats can be removed altogether to increase luggage room to an impressive 625 litres. Even more impressive is the middle-row seat. The seat can be slid back and forth; and at full extension, legroom is really good. Backrest recline-adjust also makes this a car well-suited to owners who’d prefer to sit in the back.

The Triber’s cabin features a dual-tone theme, the dashboard is neatly laid out and the quality is up there with pricier compact SUVs.

There won’t be a diesel engine option

Renault will not offer a diesel engine option with the Triber. The model will be powered by a solitary 999cc, three-cylinder, naturally-aspirated petrol engine with variable valve timing. The unit, which also powers international models like the Clio and Sandero, produces 72hp at 6,250rpm and 96Nm of torque at 3,500rpm while returning an ARAI-certified fuel economy of 20.5kpl. The power and torque figures may seem underwhelming for a seven-seater but Renault says it has optimised low-speed torque, keeping with the Triber’s usage. Also of interest is the fact that Renault is working on a turbocharged version of the engine which should add much by way of punch. In terms of transmissions, a 5-speed manual will be standard with the Triber, along with the option of a 5-speed AMT unit.

It gets a fair number of features

All Tribers will come with three-point seat belts on all rows, ABS, reverse parking sensors and at least two airbags. Additionally, top-spec variants will get the added safety of a front-side airbag.

Higher-spec Tribers will feature an 8.0-inch touchscreen infotainment system bundled with Apple CarPlay and Android Auto, a part-digital instrument cluster, aircon vents in all three rows, a cooled centre box and a reverse camera. Also part of the package will be keyless entry, push-button start, power windows and rear wash-wipe. However, auto climate control and steering-mounted buttons will be given a miss.

It won't have any direct rivals

With its launch slated for August this year, Renault is expected to price the Triber range at around Rs 5-8 lakh (estimated, ex-showroom). With no direct rivals in our market, the Triber will slot-in between the Datsun Go+ (Rs 3.86-5.94 lakh) and the Maruti Suzuki Ertiga petrol-MT variants (Rs 7.44-9.50 lakh), which are currently the most affordable seven-seaters on sale now. At this price point, the Triber sure seems like a compelling package but, only a proper road test and segment comparison will determine how good it really is.