Peugeot 2008 SUV shares its platform and engines with the upcoming Citroen CC21 crossover that will launch in India. 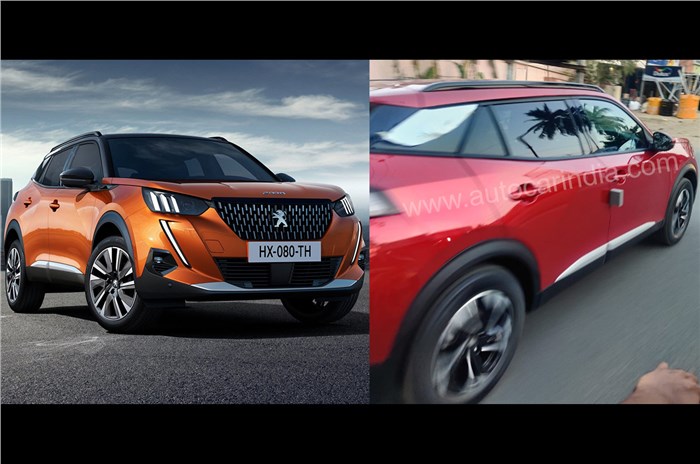 The Peugeot 2008 SUV has been sighted for the first time on Indian soil. It was spotted by our reader Gokul Raj on the outskirts of Chennai, quite close to the PSA plant that manufactures the upcoming Citroen C5 Aircross SUV.

Peugeot's contender in the European midsize SUV segment, the 2008 measures 4.3m in length and has a 2.5m wheelbase, which puts it squarely against rivals like the Ford Puma, the European-spec Renault Captur and the Skoda Kamiq, to name a few. The model spotted in India made its world debut last year and is one of the newer models from the French brand globally.

The PSA Group may have changed its India strategy from relaunching Peugeot to introducing Citroen instead, but overseas, the two French sister brands share platforms that spawn competing models. The Peugeot 2008 spied in India corresponds with the Citroen C3 Aircross mid-size SUV in Europe, but in India, its CMP modular platform, engines, gearboxes and other components will likely be used by Citroen's upcoming sub-four-metre SUV (codename: CC21).

The CC21 will be Citroen India's second launch, after the C5 Aircross whose price will be revealed next month, and this sub-four-metre SUV will go head-to-head with the Maruti Suzuki Vitara Brezza, Kia Sonet, Hyundai Venue and the like. What will almost certainly be a common factor between the Peugeot 2008 and the Citroen CC21 will be a 1.2-litre turbo-petrol engine, which in the Peugeot produces either 99hp, 128hp or 153hp. The car in the photos is likely another test bed for this engine, which is expected to be offered with a five-speed manual gearbox in the Citroen CC21 in India.

Citroen India SUV line-up in 2021 and beyond

Citroen India will start its innings with the locally assembled C5 Aircross SUV next month. Following it will be the heavily localised CC21 compact crossover that could see a world premier later this year, with a subsequent India launch. Both models will roll out from the CK Birla facility in Tiruvallur, Tamil Nadu. The group already has a plant in Hosur, Tamil Nadu, which manufactures and supplies engines and transmissions for its global and domestic businesses.