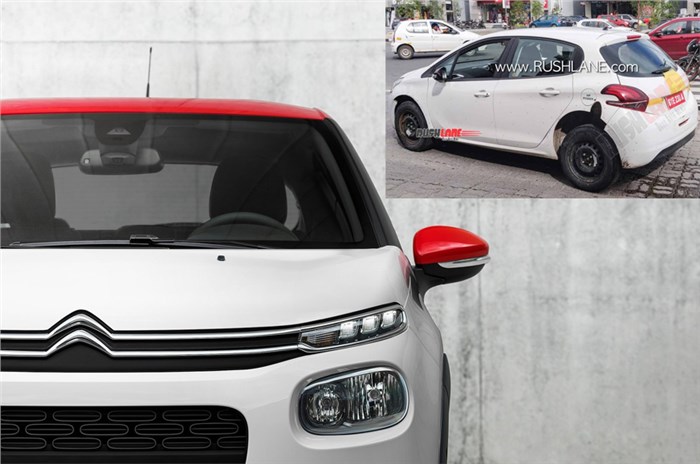 French brand Citroen’s first model for India, the C5 Aircross SUV, will launch later this year. While the C5 Aircross will be introduced to our market via the CKD route, the brand’s future vehicles for our market will be heavily localised and will be built according to Indian tastes and requirements. These new set of vehicles will arrive from 2021 onwards, with one model coming every year. These vehicles are internally known as “C-Cubed” and will be built on a common platform with unique top hats, starting with a compact SUV, a hatchback and a sedan in the future. The term C-Cubed stands for ‘Cool, Comfort, Clever’, according to the manufacturer.

The C-Cubed cars will be based on a modified version of the platform that underpins the Citroen C3 hatchback and the Peugeot 208, both of which are on sale overseas currently. The company has begun testing this new platform in India – a test mule has been spotted recently wearing a Peugeot 208’s bodyshell, but with a slightly higher ground clearance and a massive gap in its wheel wells. The platform being tested could be for the brand’s first product under the C-Cubed programme: a compact SUV that is internally codenamed C21. This new SUV, as reported by us earlier, will have a localisation level of around 90-95 percent and will be priced aggressively in our market. While the model is in very early stages of testing, the production-spec Citroen C21 compact SUV will have unconventional styling, quite similar to  newer Citroen models, and will have design cues from the current-gen C3.

Under the hood, this sub-four-metre SUV will most likely come with not one, but three engine options. The range is expected to start with a 1.2-litre three-cylinder naturally aspirated petrol engine and include a turbocharged version of the same. Additionally, the SUV will also come with a 1.5-litre DV5 diesel engine. Gearbox choices would include a locally manufactured 6-speed manual for starters, which will then be followed by an automatic version a little later.

The second locally produced model from the brand will most likely be a Baleno-rivalling hatchback that will follow the C21 SUV. A Citroen sedan for India, based on the same platform, is also on the cards. However, at this point it’s not clear whether the model will be a Dzire-rivalling compact sub-four-metre model or a four-metre-plus Honda City rival.