Sketch shows the Scala will be the first Skoda to get the company's next-gen infotainment system. 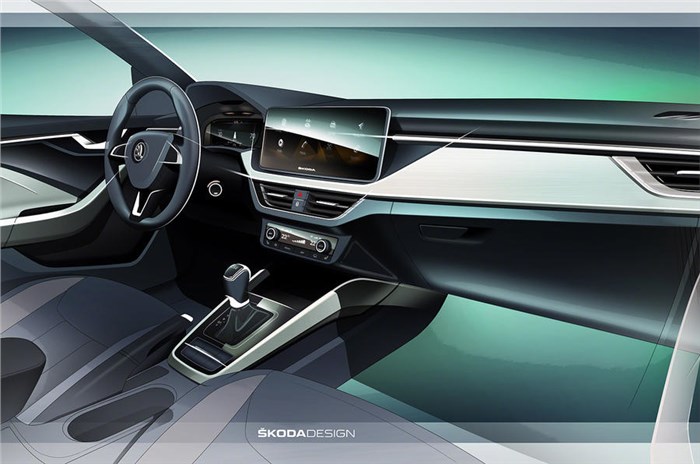 The Ford Focus and Volkswagen Golf rival will be revealed in full later this year, but this sketch is the best look yet at the car's interior. It shows the Scala will be the first Skoda to benefit from the company's next-generation infotainment, with a 9.2-inch freestanding central screen and a 10.3-in Virtual Cockpit digital instrument display - the largest screen combination in its class.

The new system features over-the-air updates and new mobile app functions. Elsewhere, new materials have been used, including a microfibre fabric for the seats. There's ambient lighting as well.

Scala is a Latin word that means ‘ladder’, and company boss Bernhard Maier said that it represents Skoda’s next step forward in the compact segment. The Scala will also be the first Skoda to feature the brand’s name instead of its logo on the rear boot lid.

Maier said the Scala is “a completely new development that sets standards in terms of technology, safety, and design in this class”.

The Scala is intended to be a more direct competitor than the Rapid to the big players in the volume hatchback segment, such as the Ford Focus and Vauxhall Astra.

Skoda sales and marketing boss Alain Favey spoke to our sister publication Autocar UK earlier this year: “How should I put this? Our presence [in this segment] is very humble. With the current Rapid Spaceback, we didn’t manage to come through to convince people that we are a credible competitor in this segment.”

He added that the Scala would have completely fresh styling and technology.

A new sketch, released by Skoda recently, hinted at the styling of the Scala, which follows on from the Vision RS concept shown at the Paris motor show.  The five-door Scala will be the first Skoda car to use the Volkswagen Group’s MQB A0 platform, which is already used on models such as the Seat Ibiza and Volkswagen T-Roc.

The next-gen Fabia, due in 2020, and Skoda's India-bound upcoming small SUV, previewed by the Vision X concept, are also to use this architecture.