Honda has started accepting orders for petrol and diesel versions of the new City. 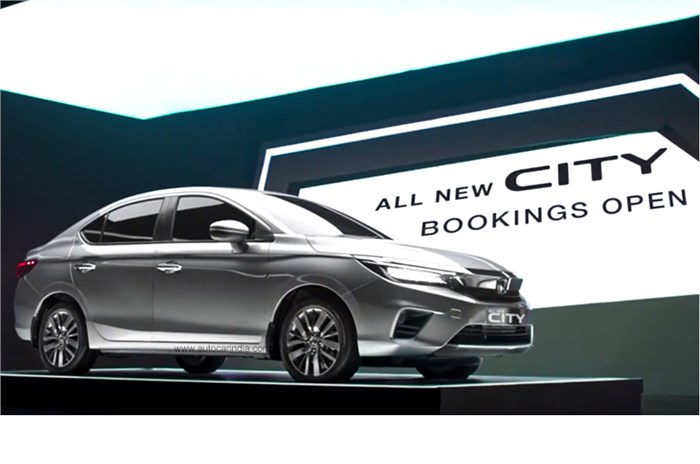 Honda has officially opened bookings for the new, fifth-generation City sedan. Deliveries for the new model will commence in July.

Where to book the new Honda City?

The new City can be booked by customers online or by physically visiting Honda Car India dealerships. The company has fixed the online booking amount for the City at Rs 5,000 while bookings at the dealership will be accepted for Rs 21,000.  The company has begun dispatches of the new City to all its dealerships in India from June 23, 2020. As per the company's website, there are over 300 Honda dealers now operational after a period of closure owing to the coronavirus-linked lockdowns.

We’ll know the answer to the all-important question only at the new City’s official launch that is scheduled for mid-July. That the new model will sell alongside the current version does suggest premium pricing and positioning for the new City. Don’t be surprised if it’s among the pricier cars in the segment with top-spec models close to the Rs 15 lakh (estimated, ex-showroom) mark. Key rivals to the new City include the Maruti Suzuki Ciaz, Hyundai Verna, Skoda Rapid, Volkswagen Vento and Toyota Yaris.

What do we know about the new Honda City already?

The new City will go on sale with two engine options. There’s a new twin-cam 1.5-litre petrol engine good for 121hp that will be offered with a 6-speed manual (a first on a City petrol) or a new CVT auto. The new City petrol does an ARAI-rated 17.8kpl with the manual and 18.4kpl with the CVT auto. Those looking for an even more efficient City will have the option of the 100hp, 1.5 diesel engine. The diesel will solely be offered with a 6-speed manual.

The model will be loaded with features with some first-in-class bits like Alexa support, which is expected to be standard only on the range-topping City. Other kit that’ll be on offer with the top-spec City ZX will include an 8.0-inch touchscreen with Android Auto, Apple CarPlay and Weblink compatibility, the Honda Connect telematics system with 32 connected car features, a 7.0-inch MID in the instrument cluster, an electric sunroof, an auto-dimming IRVM, paddleshifters (CVT only), ambient lighting, keyless entry and go, remote engine start and a hands-free boot release.

Honda recalls over 65,000 cars in India to replace fuel pump