We compare the two all-electric SUVs in terms of specification and price. 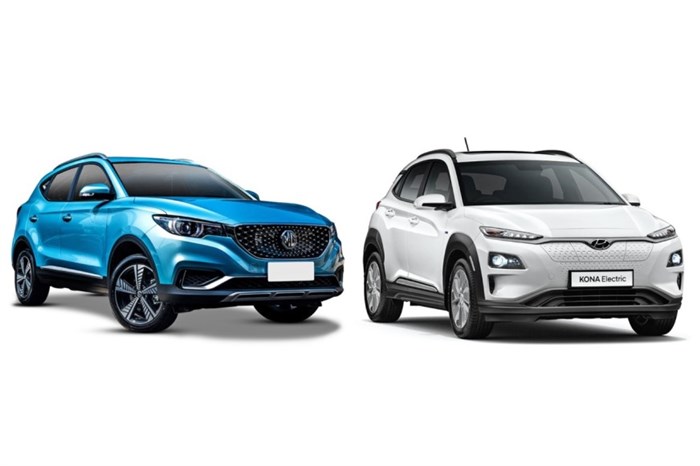 2020 has witnessed the arrival of the MG ZS EV and Tata Nexon EV. While Tata’s electric SUV doesn’t have a direct rival at the moment, the larger MG squares up against the Hyundai Kona Electric. Just how close are the ZS EV and Kona Electric on size, range, features and price? Read on to know.

How do they compare on size?

The ZS EV may be 134mm longer, 9mm wider and 50mm taller than the Kona Electric but the Hyundai has a 21mm longer wheelbase. Despite what the numbers indicate, our review of the ZS EV found that its cabin felt spacious, while we found the Kona Electric’s cabin to be a bit cramped in our in-depth road test of the car. Something that may work in the MG’s favour is its more traditional SUV-like looks – the Hyundai is comparatively more akin to a cross-hatch.

Due to heavy battery packs, neither SUV is particularly light; but the ZS EV undercuts the Kona by 17kg. Both EVs run on 17-inch wheels.

How do they compare on motor specifications?

Both electric SUVs use Permanent Magnet Synchronous Motors that send power to the front wheels through single-speed automatic transmissions. The ZS' unit produces about 7hp more while the Kona’s torque figure is 42Nm higher. We have yet to verify MG’s claimed 0-100kph time of 8.5sec, but we did feel that it was peppy and effortless to drive. In our tests, the Kona Electric managed 0-100kph in 9.09sec, which is actually quicker than Hyundai's claimed 9.7sec.

How do they compare on range and charging time?

The India-spec ZS EV comes with a 44.5kWh lithium-ion battery pack that enables an ARAI-certified 340km range – expect real-world range of about 260-290km on a single charge. Even though the India-spec Kona has a smaller 39.2kWh battery, it delivers a longer range of 452km on the ARAI test cycle. However, our exhaustive road test revealed that the Kona has a real-world range of 324km, which is still impressive as EVs go.

Over to the equally important matter of charging time: Charging via a normal AC charger takes upwards of 6hr on both EVs, with the MG using a higher 7.4kW output. Furthermore, the ZS eSUV can charge up to 80 percent using a 50kW DC fast charger in just 50min, compared to the Kona’s 57min. Both EVs make use of the CCS Type 2 connectors for charging. It's also worth mentioning that the Kona Electric comes with a 2.8kW portable AC charger that can plug in to any 15A wall socket and can get the battery pack to full charge in 19hr; 3hr of charge is good enough for a 50km drive.

How do they compare on safety kit and features?

The ZS EV is available in two variants and both Excite and Exclusive get the same safety kit. The Exclusive does add in more creature comforts for significantly more money. The Kona Electric gets all the safety kit you’d expect from a Hyundai at this price but misses on the hill-descent control offered on the MG ZS EV. A sound generator, which makes pedestrians aware that there’s an EV (silently) running around, is standard fit on both.

The Kona Electric comes in a single fully-loaded trim though Hyundai does offer a dual-tone colour option for a Rs 19,000 premium. Speaking of colour choices, the ZS EV is available in a total of three exterior options as standard, while the Kona Electric is marginally more customisable, with four on offer.

Among the two ZS EV variants, the lower-spec Excite gets a fair few goodies. However, features like leather seats, in-car connectivity tech, the PM 2.5 air filtration system, a dual-pane panoramic sunroof, a power adjustable driver’s seat and automatic wipers are only part of the package on the fully-loaded Exclusive version.

The Kona Electric trails the ZS EV Exclusive in certain areas. The Hyundai gets a smaller sunroof, has the smaller touchscreen and the absence of Blue Link connectivity tech is a curious omission as well. The Kona does charm its way back into contention with its 10-way power-adjustable driver’s seat, ventilated and heated front seats, wireless smartphone charging, paddleshifters and digital instrument cluster.

Both SUVs might be assembled in India but the high cost of imported components, like the battery pack and motor, means the duo isn’t cheap. The electric SUVs look especially expensive when their prices are seen in light of those of similar-sized combustion engine SUVs.

Of the two models, the Hyundai Kona Electric has the higher starting price, but it is a match for the fully-loaded MG ZS EV Exclusive that costs similar money. What helps the Kona’s case is the higher claimed range and the fact that Hyundai offers a standard three-year/unlimited kilometre warranty with the EV (that can be extended to five years/50,000km for no extra cost), along with an eight-year/1,60,000km warranty on the battery pack. The eSUV also comes with a five-year-long roadside assistance package as standard.

MG’s ZS EV, on the other hand, is the larger and more powerful SUV. MG also offers the ZS EV with a standard aftersales package, dubbed eShield, which gets buyers a longer five-year/unlimited kilometre manufacturer warranty on the vehicle and an eight-year/1,50,000km warranty on the lithium-ion battery pack. The eShield package also encompasses 24x7 roadside assistance (RSA) for a period of five years, which is applicable only for private buyers.

The MG ZS EV might have more going for it on paper but what will really decide our pick would be how the two SUVs perform in real-world conditions. Stay tuned for the full test.