The seats will also give the Mahindra Scorpio-N a more premium positioning over its predecessor. 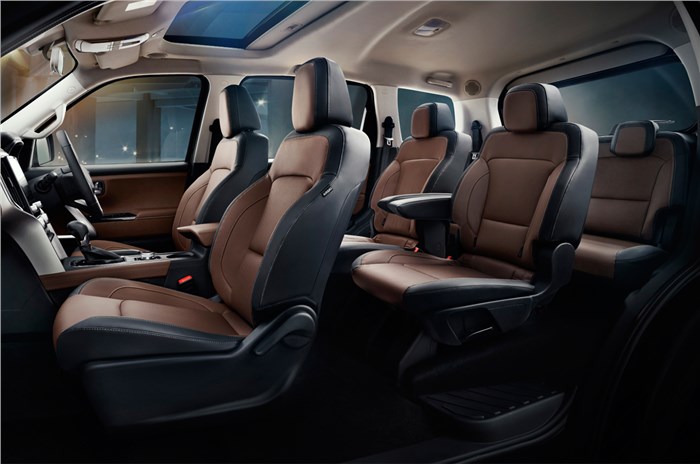 Mahindra recently revealed interior images of the all-new Scorpio-N SUV, giving us a glimpse at the seating arrangement. These images also confirm our previous report about the new Scorpio-N getting forward-facing third-row seats.

The current Scorpio also had a forward facing third-row bench seat, but that was limited to only a few variants. In contrast, the new Scorpio-N will get forward facing third-row seats in all its variants, and the model will be available in both 6 and 7-seater configurations. The third-row seats on the Scorpio-N get adjustable headrests and three-point seat belts; they also come wrapped in dual-tone leather upholstery.

Apart from marking it out as the more premium SUV, safety is also an important aspect for Mahindra here. The brand has previously gone on record to say that all its new SUVs would be high on safety, with good scores from GNCAP crash tests. Side-facing third-row seats would, however, diminish the chances of a high safety rating by GNCAP for the new Scorpio-N.

This is the same reason why Mahindra previously discontinued the base variants of the Thar with side facing bench seats – to retain the 4-star safety rating it had achieved from GNCAP. Side-facing jump seats typically miss out on seatbelts, thus offering little to no protection in the event of a crash.

Side facing seats had their advantages

The Scorpio has also been a key model in political and security fleets, as the jump seats allow easy access and the ability to quickly exit the SUV in case of emergencies. This would not be possible with front facing third-row seats. Interestingly, Mahindra has retained a side-hinged tailgate on the new Scorpio-N instead of giving it a conventional boot lid; the former facilitates easy access to the current Scorpio's side-facing seats.

While there’s still good demand for the Scorpio’s side-facing seats, given its target audience, it remains to be seen what configuration Mahindra opts for in its due update. Post the update, its name will also be revised to Scorpio Classic.