Along with clearing pending orders of Kia’s Seltos SUV and Carnival MPV, the brand has also prioritised assembly line preparations for the Sonet compact SUV. 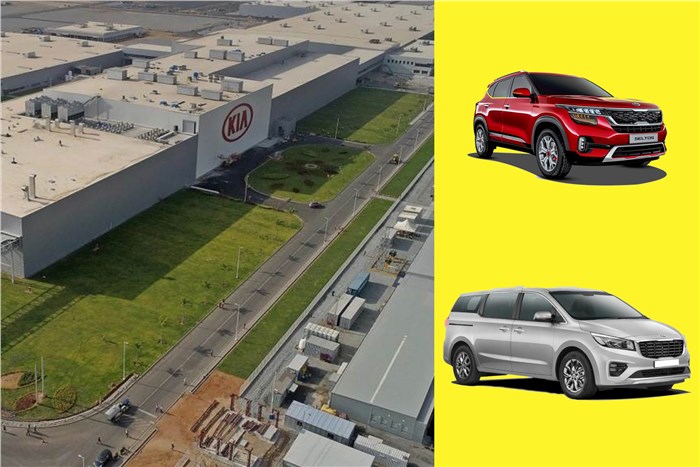 Kia Motors India has announced that it has instituted a number of new safety protocols at its facility in Anantapur, Andhra Pradesh, which had resumed production on May 8, 2020, after necessary permissions from the Andhra Pradesh Government and Anantapur local municipal corporation were taken. Production has begun after a hiatus of exactly 56 days. For now, the plant is operating in a single shift, but has already begun to churn out the Seltos SUV and Carnival MPV.

Assembly lines at the Anantapur plant are also being prepared to begin production of the Kia Sonet, the brand’s upcoming compact SUV. Kookhyun Shim, managing director and CEO, Kia Motors India said, “Kia Motors India priorities are to clear pending orders for the bestselling Seltos and luxurious Carnival, and also to prepare the line for the eagerly anticipated compact SUV, Sonet. Our stakeholders, including suppliers and logistics partners, are all in line with the current production and have assured us support in case we have to increase production volumes over the coming days.”

The new safety measures that have been instituted at the facility include sanitisation of the work space and disinfecting common computers and biometric systems, the distribution and mandatory wearing of masks, regular temperature checks, medical check-ups before entering the plant premises, social distancing in common areas and during travel to and from the factory, among others.

Kia India’s head also added, “As we resume production and bring processes back on track, we have introduced a comprehensive safety protocol to ensure a safe environment at our Anantapur plant to ensure all employees at our facility are protected. These are unprecedented conditions and we are committed to adapting to the new norms of the world while we work towards normalcy. Our initial focus is to keep our employees motivated, retain a positive outlook and deliver on our promises to our customers.”

In a bid to help the state government fight against the pandemic, the Korean brand has also announced that it has donated one lakh masks, along with the previous Rs 2 crore donation made early in April to the Andhra Pradesh Chief Minister's Relief Fund. Kia had announced a number of financial schemes and other initiatives to ensure the safety of its dealer partners, such as distributing 50,000 masks. The Korean company had also said it would provide extended free services to all its customers until July 2020.