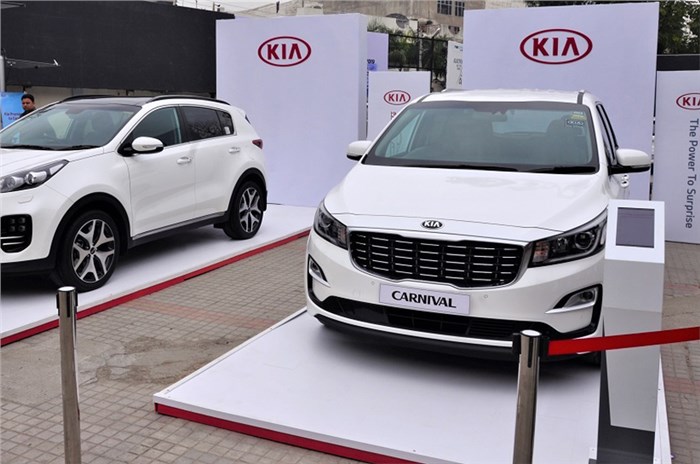 Kia Motors India has wrapped up the second phase of its Design Tour, aimed at raising awareness of the brand by showcasing the Niro hatchback, Niro EV, Carnival and Sportage SUV. The roadshow reached 26 cities in over two months and covered 15,000km. With an aim to be amongst the top five automakers within three years in India, the extensive brand-building exercise commenced from Jamshedpur on January 16 and concluded in Bhopal on March 15.

The Korean carmaker’s first product launch in India will be an SUV based on the SP Concept showcased at the Auto Expo 2018. Kia Motors recently revealed the SP Signature concept at the Seoul Motor Show. This concept is an evolution of the Kia SP Concept, which is essentially meant to be a new small SUV for global markets and previews the near-production-spec Kia SP2i SUV that is set to be launched in India later in 2019.

On January 29, 2019, Kia Motors India’s manufacturing facility in the Anantapur district of Andhra Pradesh began trial production of the SP2i SUV. The facility, which has a manufacturing capacity of around 3,00,000 units per annum, is expected to begin series production in the second-half of 2019. With a target of launching a new car every six months after the first product’s launch in India, Kia is planning on expanding its portfolio to at least five vehicles by 2021.

According to Manohar Bhat, head of marketing and sales, Kia Motors India, “The Design Tour is a great platform that multiple stakeholders – dealers, customers and opinion leaders – get to be a part of, and experience the distinctive and stunning design of Kia cars. Through this activity, we were able to gauge the excitement and anticipation around Kia amongst the masses across the country. We have received a phenomenal response from every city, and we are happy that we were able to showcase a glimpse of great design and technology of Kia before the launch of our midsize SUV in India.”