Jeep Compass facelift to be unveiled next month

Mid-cycle update for the Compass will feature a mix of interior and exterior changes and updated powertrains for some markets. India launch in early 2021 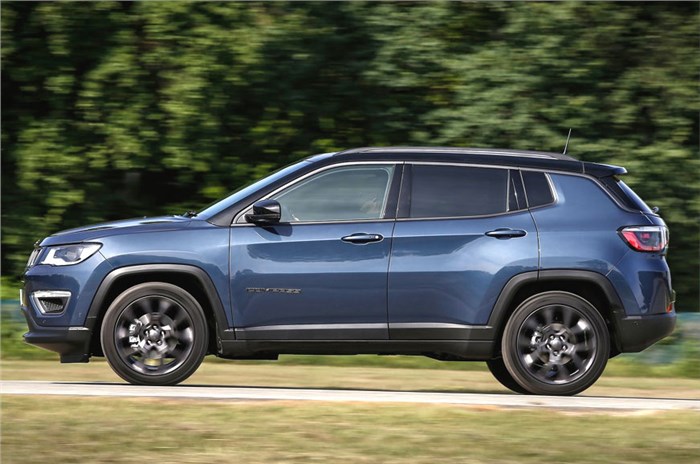 The updated 2021 Jeep Compass facelift, will finally see light of day sometime next month. The refreshed SUV is expected to be unveiled first in China at the Guangzhou international automobile exhibition that is scheduled to take place in the second-half of next month.

The current Jeep Compass has been in existence since 2016 and while the updated model will look more or less the same, it will however, carry quite a few styling changes to its outside.  The 2021 Compass will have slightly slimmer headlamps with LED units in higher variants. The grille will have a sharper look too and will look similar to the recently unveiled, Grand Wagoneer and the upcoming next-gen, Jeep Grand Cherokee SUVs.  Additionally, new front and rear bumpers and updated alloy wheel designs will sum up the changes on the refreshed SUV’s exterior.

While the exterior of the updated Jeep Compass may not see bigger changes, it’s the interior that will have the major share of the updates.  First up, the Compass facelift will come with an all-new steering wheel design which will again be shared with other future SUVs and trucks from the FCA stable, like the Grand Cherokee and the RAM 1500 pickup, to name a few. The dashboard will have better quality materials and taking centerstage will be a much larger touchscreen infotainment system that we told you about first, back in July this year. Additionally, the seats are expected to get better upholstery as well.

The new Jeep Compass will come with FCA’s UConnect 5 infotainment system and will most likely come with a 10.1 inch screen setup for the higher variants. As far as features go, this new system comes bundled with integrated Amazon Alexa support, wireless Apple CarPlay and Android Auto support, and can also receive over-the-air updates to name a few.

Sources also tell us that higher variants will come with a full-digital instrument cluster (not seen on this prototype), a 360-degree camera, wireless charging and full LED lighting as well.

Like the outgoing model, India will be the mother plant for all right-hand drive Compass units that will be sold locally, as well as in countries in the Asia Pacific region, including Australia.

Along with the cosmetic and technology updates, Jeep will also introduce a 1.3-liter turbo petrol engine and even plug-in hybrid versions of the Compass facelift in most international markets.

For India, while the refreshed Compass is expected to retain almost all styling and cosmetic changes, including the advanced infotainment system, however, we don’t expect the level-two autonomous tech to be available in the India-spec Jeep Compass facelift.

As far as powertrain options go, the Compass sold in India has already received updated BS6 compliant engines quite recently, we do not expect the new 1.3-liter turbo petrol or the plug-in hybrid electric powertrain 4Xe to come to our shores with this mid-cycle update.

Jeep will continue to build the right-hand drive Compass facelift just like the outgoing model at its Ranjangaon plant for India, as well as overseas markets.

According to sources, the refreshed Compass will go on sale in India sometime early next year. The updated Compass is one of many new product introductions expected from Jeep's stable in India. The company will also introduce a larger seven-seat SUV (Gloster rival)  sometime late next year in our market. Further on, there will be a sub-four-meter compact SUV as well that the brand will introduce thereafter.