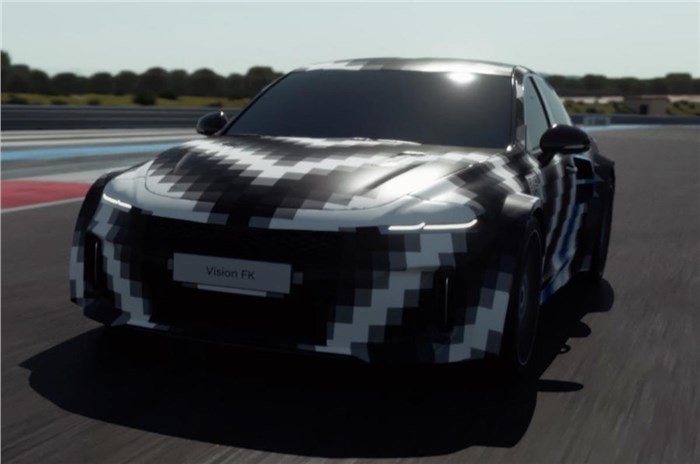 Hyundai has detailed its plans to "popularise hydrogen" by 2040 in global markets, and position the fuel as an alternative to battery electric vehicles. After the recent announcement that Hyundai is aiming to go all electric in Europe from 2035, the company has now voiced a commitment to mass produce hydrogen fuel cell electric vehicles (FCEVs), in both passenger and commercial vehicle segments. The Korean automaker also estimates that FCEVs will be priced similar to battery-EV equivalents by 2030.

Leading the hydrogen charge in the passenger sector will be a new hybrid sports car, dubbed the Vision FK concept. It is claimed to pack over 680hp, accelerate from 0-100kph in less than four seconds and achieve a range of more than 600km.

Unusually, the Vision FK pairs its hydrogen fuel-cell stack with a Rimac-developed battery-electric powertrain driving the rear wheels, which would make it the first car to use both systems; assuming it makes it to production unchanged.

Hyundai has previously suggested that future models from the N performance division would adopt hydrogen powertrain solutions. The Vision FK concept is the first physical sign that they will indeed, "use a combination of both" battery and hydrogen power sources as suggested by N boss, Albert Biermann, earlier this year.

Biermann explained today that Hyundai is developing the Vision FK as a 'rolling lab' – similar to the previous RM19 mid-engined concept - and that Rimac, in which Hyundai holds a substantial stake, was chosen as an EV technology supplier as Hyundai's own E-GMP architecture, which underpins the Ioniq 5, could not facilitate the "very challenging" packaging. Rimac, he said, has "specialised batteries" available for such an application, likely related to those used by the Nevera hypercar.

Biermann also confirmed plans to use hydrogen powertrain technology in a motorsport application in the coming years. However, there is no confirmation yet on the Vision FK's production timeline, nor has Hyundai given an indication of such a system's potential for a roll-out to other models.

Hyundai had earlier confirmed plans to heavily update the existing Nexo crossover in 2023, before launching a pair of new standalone FCEVs by 2025. But they have now detailed the upgraded hydrogen powertrain that will underpin this shift in focus to hydrogen.

The third-generation fuel cell stack – following on from the first in 2013's low-volume ix35 SUV and the second iteration in today's Nexo - will be available in two power outputs: 136hp and 272hp, with Hyundai claiming the former is now 30 percent smaller than the current system. It will therefore, Hyundai said, be readily usable in a wide variety of vehicle types, while the 272hp version is exclusively geared towards commercial applications.

More significantly, the third-generation stack promises a significantly longer usable life compared to today's system; Hyundai estimates the Nexo's current powertrain is capable of 5,000 hours or about 1,60,000km of usage, but the new system is projected to boost those figures by 50-100 percent, with the 'high durability' versions capable of some 5,00,000km of use.

With the new fuel cell stacks in operation, Hyundai has confirmed that each of its commercial vehicles will globally be offered with an FCEV powertrain by 2028.

We have reported in the past that Hyundai is looking at the feasibility of hydrogen in India. It had showcased the Nexo FCEV at the 2020 Auto Expo.

However, the lack of a distribution and retail network for hydrogen in the country will be a major challenge. For instance, until recently, state-owned oil producer Indian Oil’s Faridabad R&D centre housed the country’s only hydrogen filling station.