Hyundai Casper to be the brand's smallest SUV

Hyundai Casper (AX1) will make its global later this year; will be based on Hyundai's K1 compact car platform 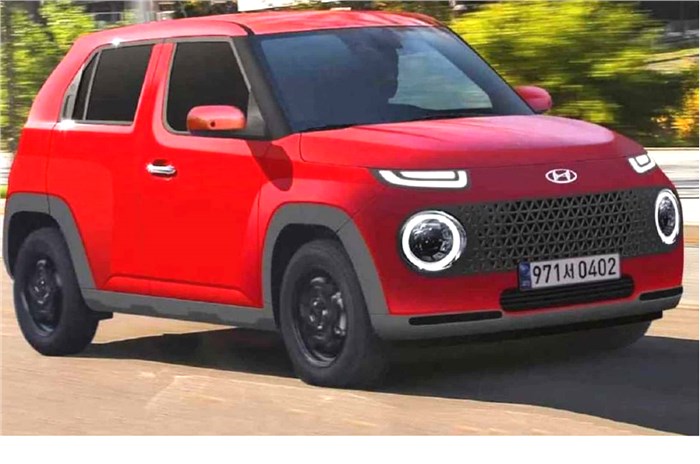 The upcoming Hyundai micro-SUV – which was known by its internal codename, the AX1 – will be called the Hyundai Casper when it enters production in the coming months. This new SUV will first go on sale in Korea, followed by other emerging markets.

Hyundai has registered the name Casper in Korea and according to multiple reports, this will be the marketing name of the AX1 micro-SUV, at least in the Korean market. While it is unofficially confirmed that the micro-SUV will be called Casper in Korea, Hyundai is known to name its cars differently according to the market; for example, the Creta is sold as the ix25 in some markets, while the Verna is called Solaris or even Accent in some nations. Similarly, the Casper (AX1) could have different marketing names, depending on the region. Sources tell us that this new SUV will go into series production in Korea, which will also be the first market where it will go on sale. A global unveil is expected by September, and India is expected to be one of the next markets where the new Casper SUV could be launched.

The Casper will be Hyundai's smallest SUV, which means it will be smaller than the sub-four-meter Venue compact SUV. The vehicle will be based on Hyundai's K1 compact car platform that also underpins the Grand i10Nios and the Santro in our market.

Spy shots suggest the model will be aimed at the youth, with its upright and boxy looks and multiple quirky bits on the exterior like rounded off edges, a flat bonnet, a split setup for the circular headlamps with daytime running lamps that are positioned on the bumper. At the back, the tail-lamp will continue the model's quirky design theme, with triangular pattern and LED bits that are similar to newer Hyundai models like the Alcazar and also the Staria MPV sold overseas. The tail-lamps, which may have a unique circular design mimicking the front looks, will most likely be positioned on the rear bumpers.

The Casper will most likely come with the same 1.2-litre, four-cylinder naturally aspirated engine as in the Grand i10 Nios (where it produces 83hp and 114Nm). The Korean carmaker could also offer lower variants of the micro-SUV with the Santro’s 1.1-litre, four-cylinder petrol engine, in order to keep its costs down. Additionally, there are talks of the Venue's 1.0-litre turbo-petrol unit making its way under the hood of the Casper, in some markets.

The Hyundai Casper's most direct rival would be the upcoming Tata HBX micro-SUV if launched in India. Additionally, it will also see competition from some of the other high-riding hatchbacks like the Maruti Suzuki Ignis and the Mahindra KUV100, to name a few.