Tata HBX-rivalling micro-SUV will sit below the Hyundai Venue; India launch likely in the coming years. 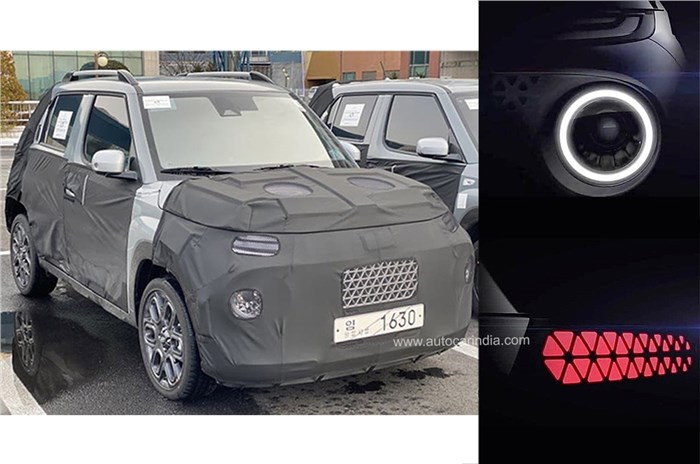 The all-new Hyundai micro-SUV, codenamed AX1, has been teased ahead of its reveal in international markets. The teaser shows a glimpse at the SUV’s headlamps and tail-lamp design though it is unclear if Hyundai will be revealing the final product or a near production concept.

Starting with two teaser images, they preview the micro-SUV’s headlamps and tail-lamps. As has been evident from past images of the test mule, the AX1 will follow Hyundai’s SUV design language with split headlamp design up front. The teaser image of the headlamp shows a circular projector unit set within the bumper. The unit features a LED DRL ring with the upper portion of the image also providing a glimpse of the upper light cluster – likely housing the turn indicators.

The image of the tail-lamp shows a unit with an intricate triangular patterning – likely LED modules. The same is evident on some spy images of the car’s rear that are circling the web. Spy images have revealed that the AX1 will get split light clusters at the rear with secondary units in the bumper expected to house the reverse light and indicators.

Hyundai AX1: What we know so far

Hyundai confirmed development of a micro-SUV back in 2018 with spy shots of test mules doing the rounds on various websites by 2020. The test mules show the AX1 will have the upright proportions of an SUV with the SUV set to measure in at around 3.7-3.8m making it smaller than the Hyundai Venue.

While additional details are yet to be confirmed the AX1 is likely to be underpinned by Hyundai’s K1 platform that underpins the Grand i10 Nios in India. The compact SUV is likely to make use of the latter’s 1.2-litre petrol engine though lower models could get the Santro’s  1.1-litre unit to keep costs down.

The AX1 is expected to go into series production in Korea first with trial production already underway. The model will see a world premiere in the coming months and will go on sale in Korea by September this year. Expect the AX1 to make its way to India sometime in the future as a rival to the upcoming Tata HBX compact SUV along with models such as the Mahindra KUV100 and Maruti Ignis.