Hyundai Alcazar to debut in April 2021

Hyundai Creta-based Alcazar SUV will be sold in six and seven seat layouts. 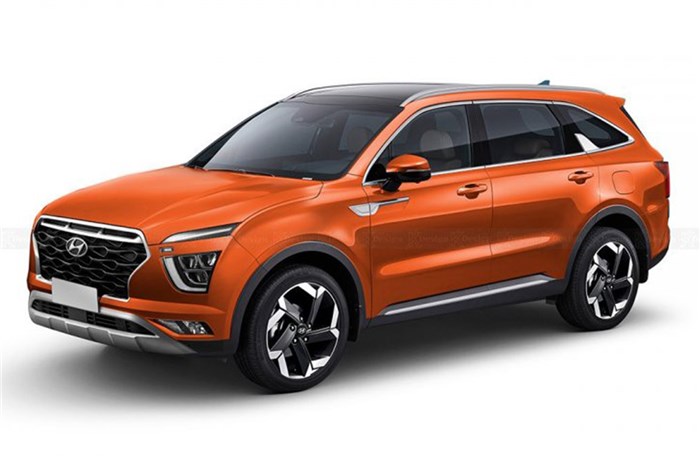 The Hyundai Alcazar SUV will be revealed for the first time to the general public in April 2021. This new SUV will be based on the Hyundai Creta and will be one of the first three-row SUVs from Hyundai after a long time.

The upcoming Hyundai three-row SUV has been spotted road testing often, the details lead us to believe it will share quite a few elements with the Creta. As far as looks go, the Alcazar will have a tweaked version of the Creta’s front bumper and grille, a different alloy wheel design and a few other cosmetic differences. The SUV, however, will have additional length added to its rear overhang in order to accommodate the third row of seats.

While there may not be many exterior differences on the new Hyundai Alcazar, it’s the interior that will be its key talking point. The Alcazar will be offered with both six and seven seat configurations. We recently brought you the first and only spy shots of the SUV's interior that feature dual-tone captain seats, a rather unique floor mounted central armrest with cupholders and what seems to be a storage console below. Hyundai will also provide a wireless charging pad for the second row along with ISOFIX mounts.

For India, the new Hyundai Alcazar will come with the same petrol and diesel engine options that are offered on the Creta. This means Hyundai could offer a wide range of engine and gearbox options that will give customers more choice than its direct rivals – the MG Hector Plus, the Mahindra XUV500 and the Tata Safari.

We expect Hyundai to announce pricing for the Alcazar SUV sometime in May 2021.