Honda is not likely to offer the 100hp, 1.5-litre diesel engine on the City facelift. 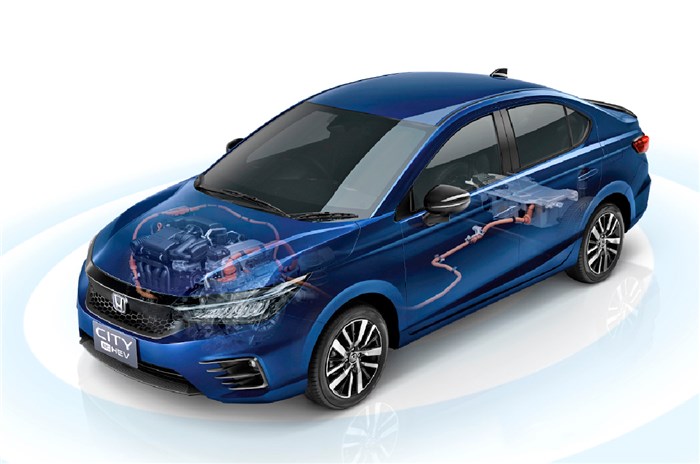 Honda is readying a mid-lifecycle update for the 5th-gen City in India that’s slated to debut by March 2023. This will be the first update since it was launched in mid-2020, although sources tell us that it will only be limited to minor cosmetic changes. To increase the appeal of the petrol-hybrid powertrain, Honda will likely introduce a new trim along with a variant rejig for the regular City.

Honda City facelift: what to expect?

Like most Honda mid-lifecycle updates, changes on the City facelift will likely be limited to just the soft plastic parts. It’s expected to get revised front and rear bumpers along with a new design for the alloy wheels. Honda will also reshuffle the variant line-up for the City, and while no major changes are expected on the inside, it could see the addition of new features such as ventilated seats and a wireless charger, which rivals offer.

Honda currently offers the e:HEV powertrain only on the top-spec, fully loaded ZX trim. Priced at Rs 19.89 lakh (ex-showroom), it’s also considerably more expensive than the standard City petrol that currently tops out at Rs 15.62 lakh (ex-showroom). We are told that Honda will introduce a more affordable trim of the City e:HEV, thus, decreasing the gap between the petrol and the hybrid.

The City facelift will be offered as a petrol-only sedan. As we have reported before, Honda will be discontinuing the 100hp, 1.5-litre diesel engine on the City due to the upcoming RDE norms that come into effect from April 2023.

The City facelift will, therefore, come with the 121hp, 1.5-litre petrol engine, mated to either a 6-speed manual or CVT automatic gearboxes. There will also be the 126hp, Atkinson Cycle 1.5-litre petrol-hybrid powertrain that comes mated to an e-CVT transmission.

Expect the City facelift to be priced at a slight premium over the current model. As before, the City will continue to rival the likes of the Skoda Slavia, Volkswagen Virtus, Maruti Suzuki Ciaz and the Hyundai Verna. The Verna is also due to receive a generation change that’s set to debut in the coming months.

Honda is also readying a brand new midsize SUV for India that will make its global debut by mid-2023. Earlier this month, the carmaker released a teaser of the upcoming SUV, giving us a sneak peak of what the SUV could look like. It will be based on an updated version of the Amaze's platform, and will likely share its powertrain options with the City. A price announcement will take place closer to the festive season this year.

Honda Type R line-up to continue into the EV era