Tesla’s sister company, 'The Boring Company' reveals retractable wheel gear that can transform a car into a rail-guided train and back again. 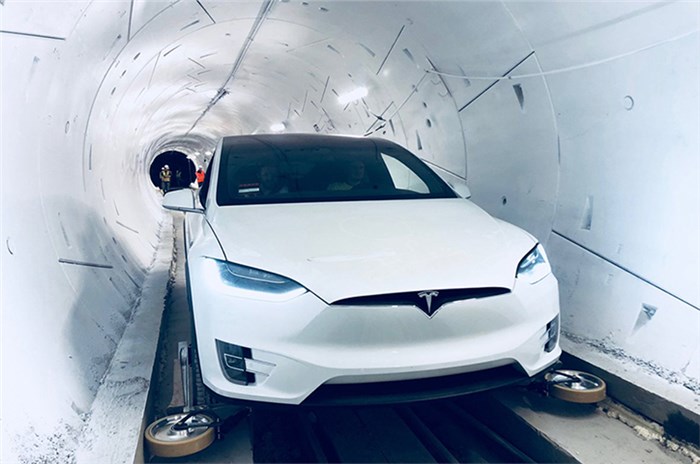 The Boring Company, founded by Tesla-owner Elon Musk, has unveiled a prototype underground tunnel that it claims can transport autonomous electric cars at speeds going up to 241 kph. This one-mile test tunnel in Los Angeles has been constructed so as to show the feasibility of The Loop – described by  Musk as the “future of mass transit”.

Special tracking wheel enhancements can be fitted on Electric cars, which give the car the ability to be attached to a track in the tunnel. This attachment has been designed to keep the car stable while travelling at high speeds, being guided by its own autonomous functions. Right now, the level of autonomy needed for this has not been made clear.

The Boring Company has modified a number of Tesla Model X SUVs to test on the prototype tunnel. Musk says that the system is currently capable of car speeds going up to 177kph. However, test runs during the launch event were limited to 80 kph.

Only cars from Musk’s Tesla firm have so far been used in the tunnel; but the entrepreneur said that any electric car with full autonomous capability would be able to use the system when it is complete. Musk has said that each tunnel could eventually support up to 4,000 cars per hour, with a number of extra cars circulating the system capable of picking up and dropping off pedestrians.

A number of reports from those who took test runs on this new system have said the ride was bumpy. Musk attributes this to the short timescale to prepare the tunnel. He claims that the finished version would be “as smooth as glass.”

He added that the smaller size of the tunnels – less than 14ft in diameter – compared to those for underground train lines (around 28ft) meant they are both cheaper and quicker to produce. Musk also added that he was investing in developing boring machinery to improve construction speeds.

Some transport planners have questioned the viability of the scheme, suggesting that it would create bottlenecks at the entrance and exit points. However, Musk said the small size of such stations allows for more of them to be installed than for a subway system. He added that, while pricing was not set, he was aiming to charge USD 1 per trip.

The Loop is a separate project to the Hyperloop One scheme that Musk is also involved in. The latter uses a vacuum-sealed turbo to propel large autonomous pods at speeds above 965kph, while the new project is designed to work with modified cars.