The BMW iX all-electric SUV has been launched in India for a price of Rs 1.16 Crore, (ex-showroom, India). The iX is BMW’s first electric vehicle in the country that comes via the CBU (completely built unit) route and has been launched in xDrive 40 guise. Built on an evolved electric-only architecture, the iX sits at the top of BMW’s range serving as the firm’s ‘technology flagship’.

The BMW iX xDrive 40 produces 326hp of power and 630Nm of peak torque.BMW claims that the xDrive 40 can sprint from 0-100kph in 6.1sec and has a top-speed of 200kph. The xDrive 40 gets a dual electric motor set-up with one motor on each axle, giving it all-wheel drive. The AWD controller distributes torque between the front and rear axles, depending on driving conditions.

The iX gets double wishbone suspension at the front, a rigidly located steering column, front and rear roll axles and uniquely individual damper control. The iX is based on evolution of BMW's CLAR platform that uses carbon fibre and aluminuium in its contrsuction. Incidentally, the alumimium used on the iX is mostly recycled. 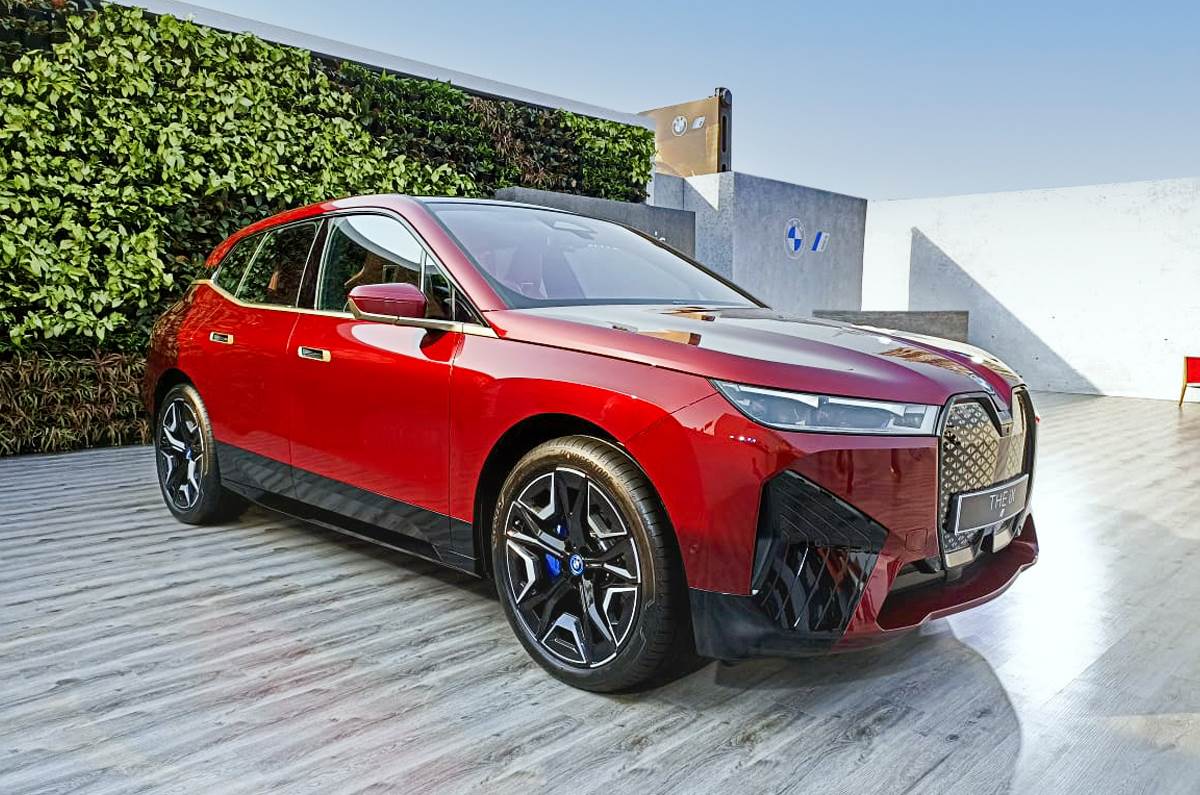 Globally, the iX is also available in a higher-spec xDrive 50 variant that produces 523hp and 765Nm of peak torque, with a driving range of up to 611km on the WLTP cycle. As per BMW, this version of the iX can sprint from 0-100kph in 4.6sec.

The BMW iX xDrive 40 gets a 76.6kWh battery pack. As per the WLTP cycle, the xDrive 40 has a claimed driving range of up to 425km. BMW is providing, as standard, a 2.3kW, single-phase charger for domestic sockets and a 11kW AC wallbox charger, as an introductory offer. Using the 2.3kW charger, the battery can be topped up from 0 to 100 percent in 36 hours, while the latter can top it up in just seven hours. 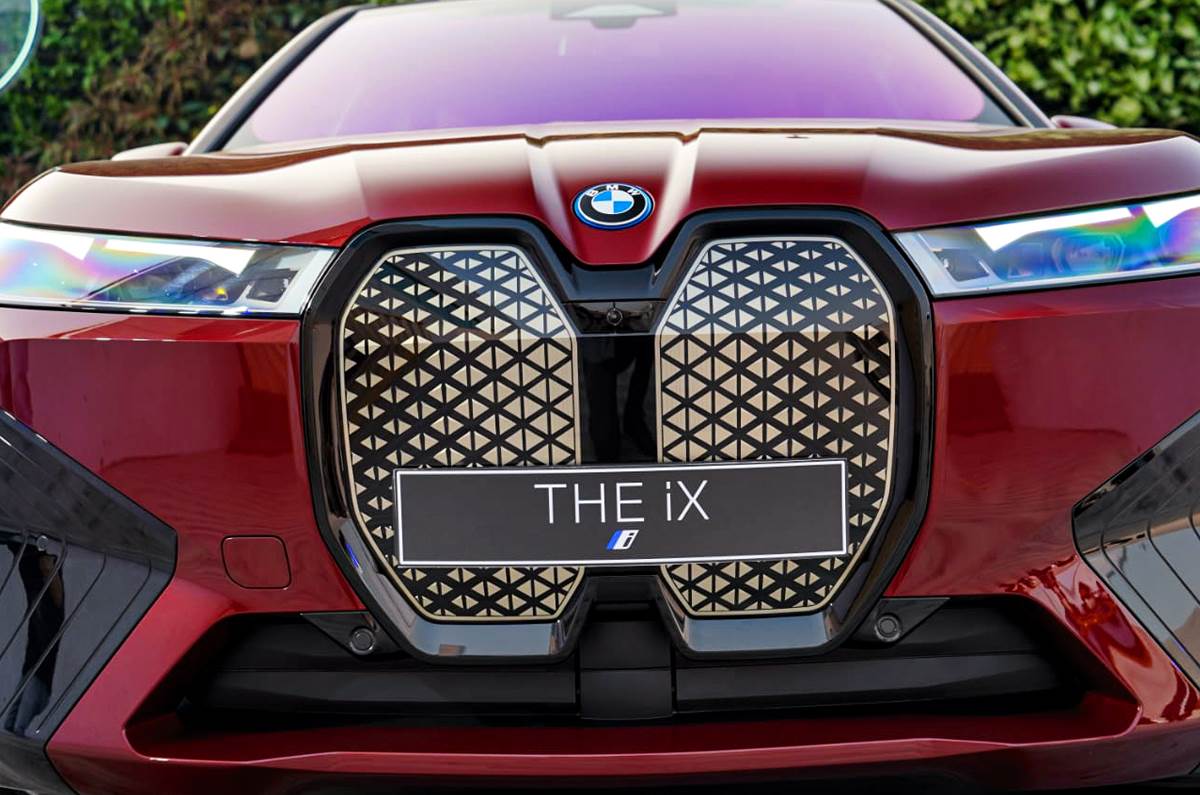 The design of the BMW iX was first previewed by the iNext Concept from 2018. It’s a very futuristic take on the BMW look, with several EV-specific bits that set it apart from the brand’s ICE-powered models. The face of the iX is characterised by BMW’s unmistakable and rather large kidney grille. However, as there is no need to feed air into the radiator, the grille is sealed off and houses several cameras, radar and sensors needed for driver assistance systems. In addition, the plastic on the grille is self healing. In the iX, BMW’s traditional corona light graphic has been replaced by a quartet of light bands in the upper part of the slim headlamp assemblies. The tail-lamps, too, have a similar sleek design. 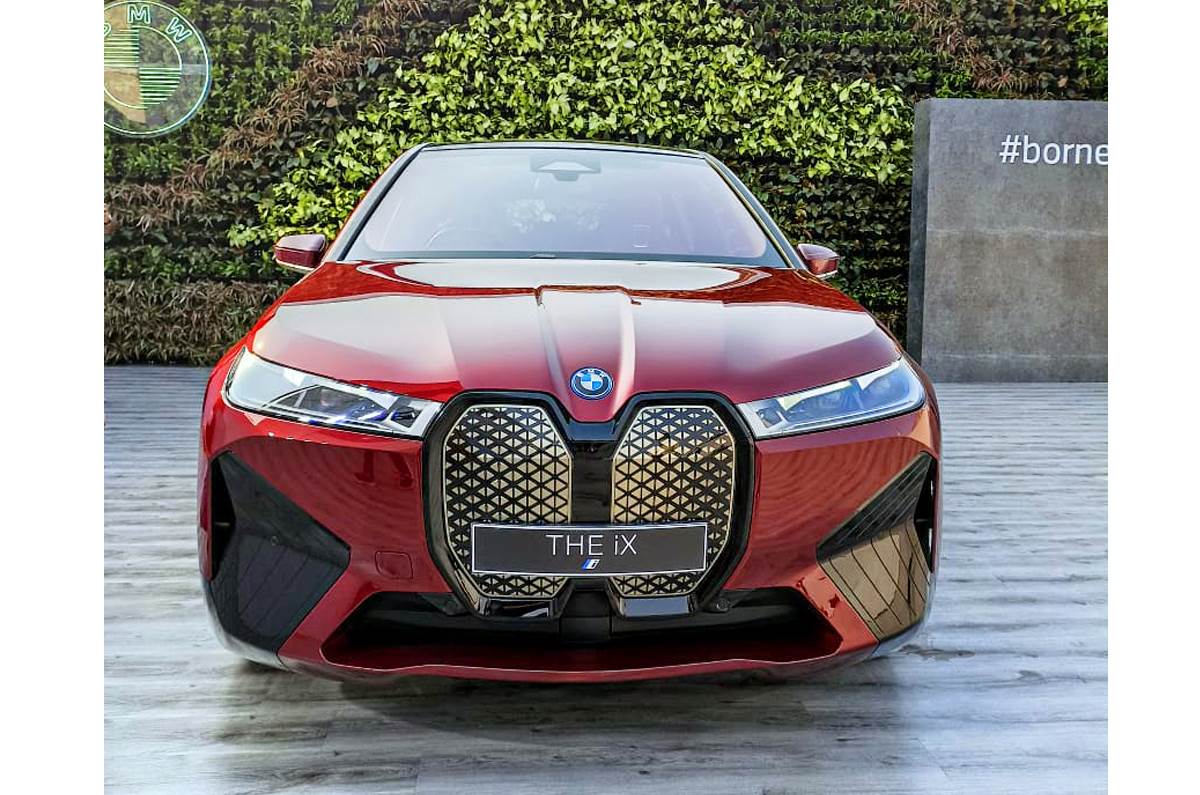 In its M Sport guise, the front bumper features sharp, angular design cues with air vents for aerodynamic efficiency, while the rear bumper features diffuser inserts. Other design highlights of the iX include frameless windows, flush-fitting door handles, a fixed clamshell-style bonnet, side skirts and tapered glasshouse. The iX rides on 21-inch aerodynamically optimised rims and 255/50 profile rubber. With all the aero bits and basic shape built to reduce wind resistance the coefficient of drag us an impressive 0.25.

While the iX is sized similar to a BMW X5, its interior space is more comparable to that of the X7, thanks to the electric architecture that liberates space around the front centre console area and also allows for a flat floor. The iX uses natural materials for its upholstery and recycled plastics for some interior trims. 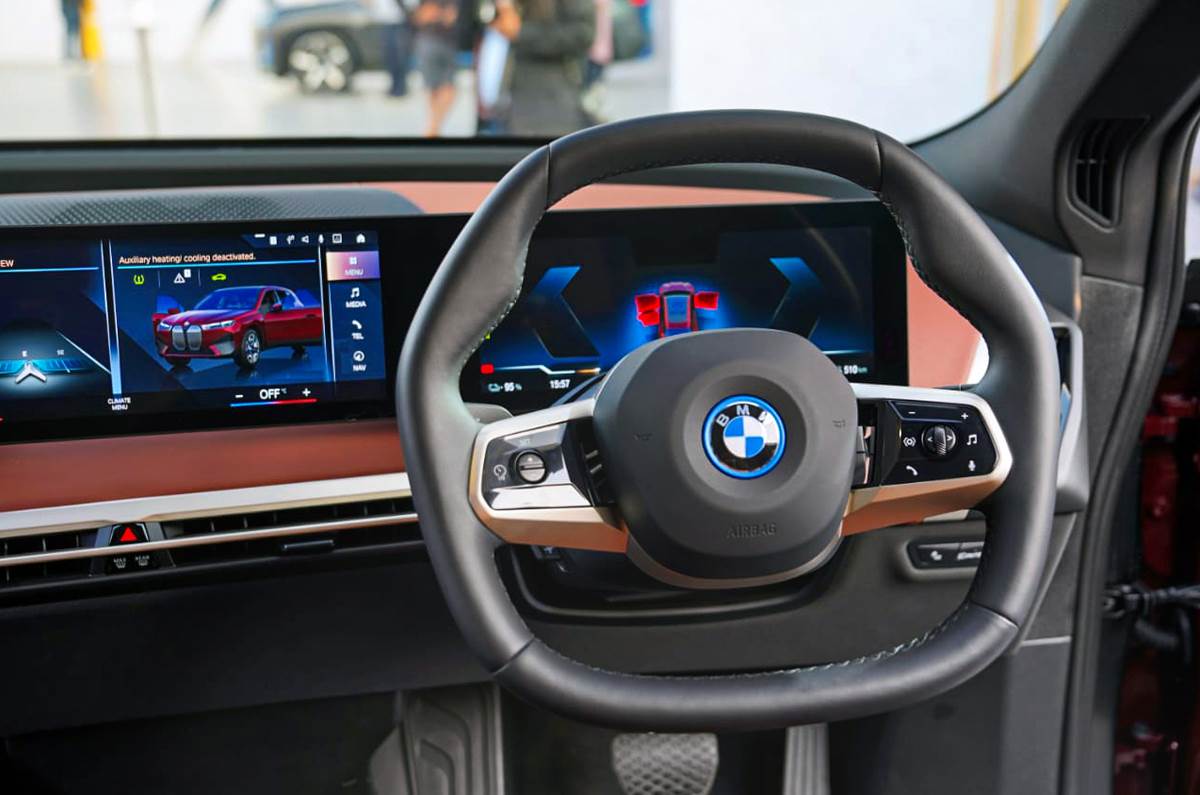 Lack of physical buttons brings out a beautiful sense of minimalism inside the cabin of the iX. This being an EV, there’s no centre console, but the controls for the drive selector and BMW’s iDrive rotary controller are set within the forward section of a high-mounted armrest. A few other controls are positioned on the door trims.

Quality levels on the inside are impressive. High-quality wood chrome and leather are blended beautifully and overall quality standards are not too far removed from the BMW 7 series. The cabin has a bright airy feel to it, the front seats are large, sporty and extremely supportive and with several crystal bits scattered around the cabin, this car feels both luxurious and techy. 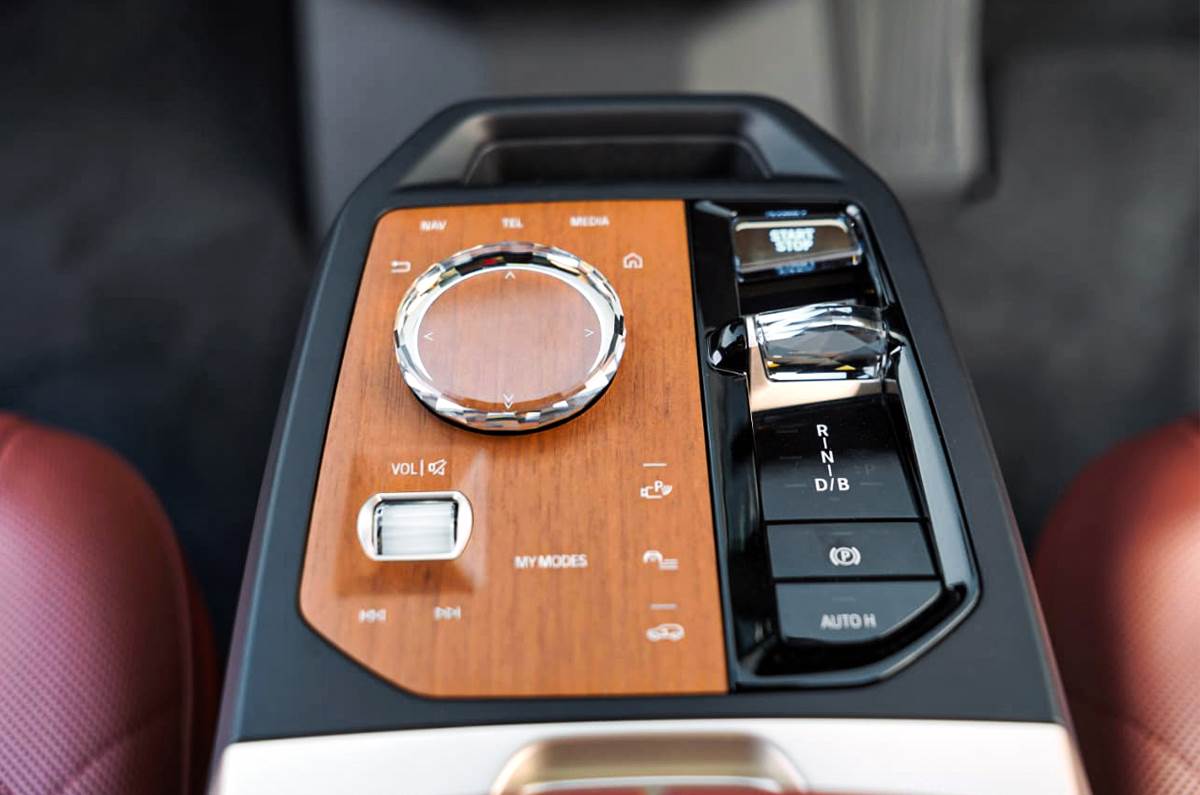 BMW is last of the mainstream luxury carmakers to launch an electric vehicle in India. The BMW iX will rival the likes of the Mercedes-Benz EQC, Audi e-tron SUV and Sportback and the Jaguar I-Pace.

What are your thoughts on the all-new BMW iX and its pricing in India? Do you think it can match up to its rivals? Let us know in the comments below. 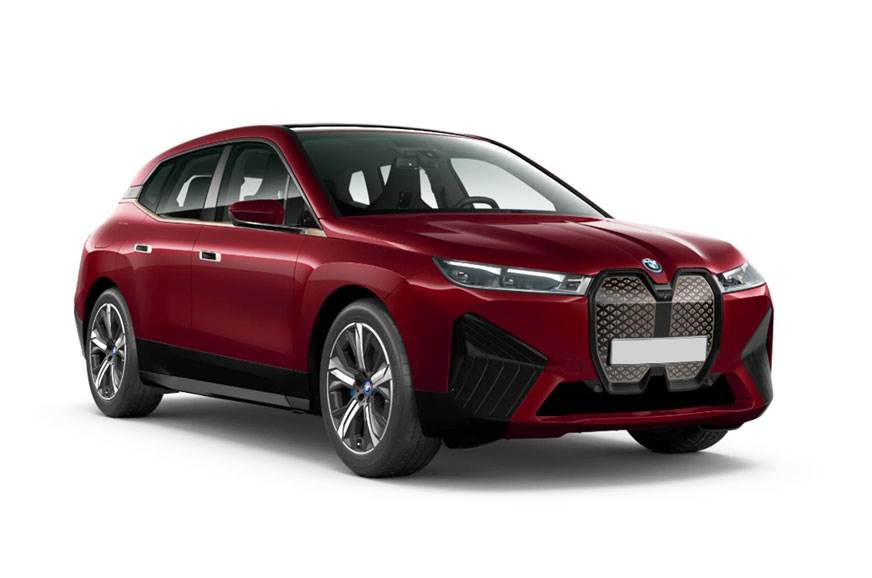 THE TYRE ASPECT RATIO APPEARS VERY LOW ,THE LOT OF CAR BUYERS WILL HAVE ISSUES + THIS WILL HAVE NO SPARE WHEEL

Its Typical European Car , SUPPOSED TO BIG CAR , BUT THE REAR SEAT IS LOW & LACKS UNDER THIGH SUPPORT

THE TYRE ASPECT RATIO APPEARS VERY LOW ,THE LOT OF CAR BUYERS WILL HAVE ISSUES + THIS WILL HAVE NO SPARE WHEEL

Its Typical European Car , SUPPOSED TO BIG CAR , BUT THE REAR SEAT IS LOW & LACKS UNDER THIGH SUPPORT