Dealers are offering discounts and benefits going as high as Rs 1 lakh on some models. 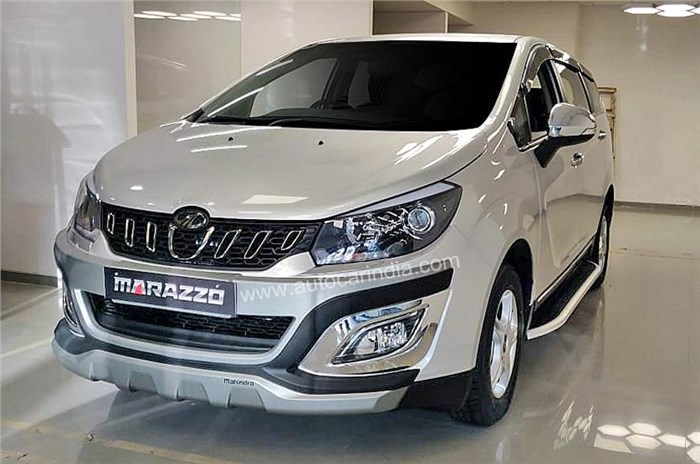 With the year drawing to a close, Mahindra is offering buyers with incentives to invest in one of its models. The automaker is offering discounts and benefits ranging from Rs 15,000 all the way up to Rs 1 lakh.

Here is a look at the discounts offered:

Save up to Rs 15,000
Marazzo, Mahindra’s newest model and India’s first four-star safety-rated MPV, is being offered with exchange benefits of up to Rs 15,000. The contemporary MPV is available in a choice of four trim levels and is powered by a 123hp, 1.5-litre diesel engine paired with a sole 6-speed manual gearbox.

Save up to Rs 50,000
The Bolero is tough, economical and reliable, which has made it popular in rural segments of the country. Mahindra dealers are offering benefits of up to Rs 50,000 on the standard Bolero while the Power Plus is being offered with benefits of up to Rs 40,000. The standard Bolero is available in five trim levels and draws power from a 63hp, 2.5-litre diesel engine. On the other hand, the Power Plus is offered in three trim levels and is powered by a more powerful 71hp, 1.5-litre diesel unit. Both models are available with a manual gearbox only.

Save up to Rs 65,000
The Mahindra TUV300 is a rugged compact SUV that is currently being offered with discounts of up to Rs 65,000. There is Rs 46,000 cash discount along with an additional Rs 15,000 off upon exchanging your old car. To top it off, there is also a corporate discount of Rs 4,000 on the TUV300. Lower-spec variants are powered by a 84hp, 1.5-litre, three-cylinder diesel engine while higher-spec trims get a more powerful 100hp version of the same motor. While the TUV300 vies in the same space as the Nexon and Vitara Brezza, this ladder­-frame compact SUV is not nearly as successful as its rivals.

Save up to Rs 70,000
A modern alternative to the aging Mahindra Scoprio, the TUV 300 Plus is powered by a 120hp, 2.2-litre diesel motor mated to a 6-speed manual. The seven-seat SUV can now be bought with benefits and discounts going up to Rs 70,000, depending on the variant, of which there are three on offer (P4, P6 and P8).

Save up to Rs 79,000
Mahindra is offering benefits worth up to Rs 79,000 on the quirky KUV100. The automaker is offering cash discounts of up to Rs 46,000 along with exchange discounts worth Rs 28,750. Additionally, corporate buyers can get a further discount of Rs 4,000. The KUV is available in a choice of five variants with either a petrol or diesel engine paired with a 5-speed manual gearbox as standard. An AMT variant is currently in the works.

Save up to Rs 79,000
The XUV500 was Mahindra’s flagship product until the launch of the Alturas G4 last month. Mahindra dealers are offering benefits of up to Rs 79,000 on the SUV. The seven-seat SUV comes with petrol and diesel engine options – a 140hp, 2.2-litre petrol mill and a 155hp, 2.2-litre diesel motor. While the former gets a 6-speed automatic as standard, the latter has 6-speed manual and automatic options, along with an AWD option.

Save up to Rs 85,000
The Scorpio has been a steady seller for Mahindra for more than a decade. This December, Mahindra dealers are offering benefits worth up to Rs 85,000 on the SUV. The Scorpio is a tough SUV that works well for everyday transport but is lacking in key areas – namely its driving dynamics and poor ergonomics. While the base trim gets a 75hp, 2.5-litre diesel, higher-spec models get a 2.2-litre engine in 120hp and 140hp states of tune.

Save up to Rs 1 lakh
Mahindra’s new flagship SUV is being offered with benefits of up to Rs 1 lakh. The Alturas is offered in two trim levels with a base 2WD model and a fully-loaded 4WD trim. Both variants are powered by a 181hp, 2.2-litre diesel engine paired with a Mercedes-sourced 7-speed automatic gearbox as standard.

Disclaimer: Offers valid till stocks last or December 31, 2018. Discounts offered likely to vary, based on location and dealer.