Big discounts on Hyundai Creta, Xcent, Grand i10, Nios, Verna, i20 and more

Hyundai dealers are offering up to Rs 2 lakh off across the brand's vehicle range as part of end-of-the-year discounts and benefits. 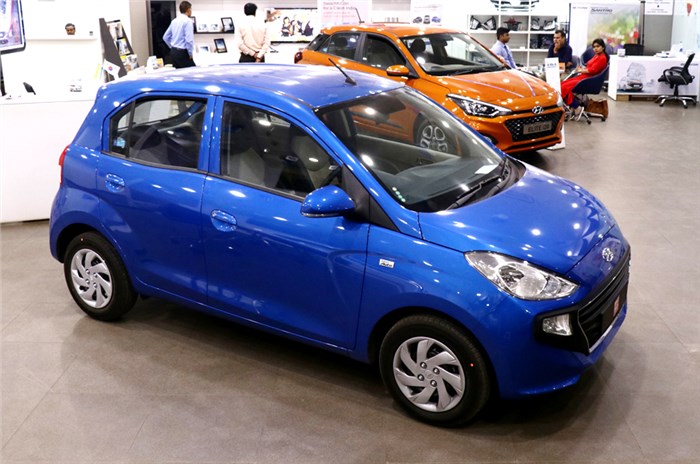 As the year draws to a close, most automakers are offering significant benefits and savings on their model year 2019 stock to clear inventories and boost sales in the Indian market; which is currently playing witness to the worst slowdown it's seen in the past two decades. Hyundai posted sales of 44,600 units in November, marking a year-on-year growth of 2 percent albeit a month-on-month decline of 10.8 percent.

The carmaker is hoping to end this year on a stronger note by extending hefty discounts on its entire range of hatchbacks, sedans and SUVs, except the Venue, Kona Electric and Elantra facelift. Read on as we list the deals available for Hyundai vehicles this December.

Hyundai Elantra (pre-facelift)
Save up to Rs 2.05 lakh

The Korean automaker recently updated its flagship sedan in our market with a fresh design, more equipment and a BS6-compliant petrol engine. However, packing in most of the essential features for an executive sedan, the pre-facelift version still comes off as a good buy, especially considering the Rs 2.05 lakh benefits on offer, including a cash discount and an exchange bonus. The old Elantra comes with a 152hp, 2.0-litre petrol or a 128hp, 1.6-litre diesel under the hood to take on the likes of Skoda Octavia, Honda Civic and Toyota Corolla Altis. Transmission duties are handled by a 6-speed manual or a 6-speed automatic gearbox.

Hyundai Tucson
Save up to Rs 2.05 lakh

Positioned as Hyundai’s rangetopping model in India, the Tucson rivals the Jeep Compass, Honda CR-V and Volkswagen Tiguan in our market. The attractive five-seat SUV is available with a pair of 2.0-litre engines – a 155hp petrol and a 185hp diesel. Base variants can be had with a manual transmission while the fully loaded trims get an automatic transmission. All-wheel drive is also offered on the top-end trim. Before the Tucson facelift makes it to our shores next year, dealers are extending discounts as high as Rs 2.05 lakh on the current-gen model.

Hyundai Creta
Save up to Rs 1 lakh

The popular Creta has helped Hyundai gain a significant market share of the utility vehicle segment ever since its launch in 2015. Though newer rivals like the Kia Seltos, MG Hector and Tata Harrier have slowed down the sales juggernaut recently, Hyundai will respond by bringing the second-gen Creta to Inida early next year. To help the current-gen SUV soldier on until then, the company is offering massive discounts of up to Rs 1 lakh on the petrol and larger capacity diesel engine models.

In terms of powertrains, prospective buyers get to choose from a 123hp, 1.6-litre petrol, a 90hp, 1.4-litre diesel and a 128hp, 1.6-litre diesel motor. While a 6-speed manual is standard, an automatic can be opted for with the pair of 1.6-litre engines.

Hyundai Xcent
Save up to Rs 1 lakh

The Xcent is the only compact sedan offering from Hyundai for the time being and it goes up against the Maruti Suzuki Dzire, Honda Amaze, Ford Aspire and Tata Tigor. Cash discounts and exchange bonuses amounting to a total of Rs 1 lakh can be availed on the Xcent this month. Furthermore, certain special deals also see the mid-spec S and higher SX trims in the petrol guise being offered at attractive prices of Rs 5.39 lakh and 5.99 lakh (ex-showroom, Delhi), respectively. The current-gen Xcent is powered by a pair of 1.2-litre engines that make 83hp in case of the petrol and 75hp in case of the diesel. A 5-speed manual gearbox is standard, with an automatic transmission also available with the former engine.

As we had previously reported, Hyundai is gearing up for the world premiere of its next gen compact sedan, dubbed the Aura, on December 19, 2019.

The Grand i10 has been on sale in its current avatar for quite some time. However, a recent rejig post the launch of the new Nios means that the standard i10 is now available in only two trim levels with an 83hp, 1.2-litre petrol engine mated to a 5-speed manual transmission. There is also the option of a CNG-equipped variant. Though a generation old now, the Grand i10 still makes for a decent buy, especially if overall benefits of up to Rs 80,000 that are currently being offered are brought into consideration.

Pitted against the Maruti Suzuki Baleno, Toyota Glanza, Honda Jazz and the upcoming Tata Altroz, the i20 has proved to be a consistent performer for Hyundai. To boost end-of-year sales, the company is offering savings of up to Rs 40,000 on the lower Era and Magna+ trims and Rs 70,000 on the higher Sportz+ and Asta (O) variants. Powertrain choices include an 83hp, 1.2-litre petrol engine paired with a manual or CVT auto gearbox and a 90hp, 1.4-litre diesel motor coupled to a manual transmission as standard.

To fortify its sales in the premium hatchback segment, Hyundai will be giving the popular model a major update next year.

Hyundai’s answer to the Maruti Suzuki Ciaz and Honda City, the Verna is yet another model that will see an update in the coming months. Consequently, prospective customers can get the existing mid-size sedan model with savings to the tune of Rs 65,000, including a cash discount and an exchange bonus. The current-gen Verna gets the option of two petrol and two diesel engines, with the pair of larger capacity 1.6-litre motors benefitting from an optional automatic gearbox.

Hyundai resurrected the Santro nameplate last year with an all-new model. Facing stiff competition from the Maruti Suzuki WagonR and Tata Tiago, the company is offering attractive deals on its budget hatchback with the promise of savings of up to Rs 60,000. The Santro is powered by a 69hp, 1.1-litre petrol engine mated to either a manual or an AMT auto gearbox. Those looking for lower running costs have the option to opt for the factory-fit CNG variants.

The Active is a ruggedly-styled i20 that boasts of a greater ground clearance and body cladding all around for the sake of crossover inspired looks. Available with essentially the same powertrain as its premium hatchback sibling (except the automatic option), the Active i20 is being offered with special discounts of up to Rs 30,000 this month.

Hyundai’s latest attempt to rival the Maruti Suzuki Swift and Ford Figo, the Nios is a sharply styled and feature packed mid-size hatchback. Available with a pair of 1.2-litre petrol and diesel engines mated to either a 5-speed manual or an AMT automatic gearbox, the Nios is being offered with an exchange bonus worth up to Rs 25,000 this December.